Get to Know HFC: Coach Mike Abney’s love of baseball is lifelong 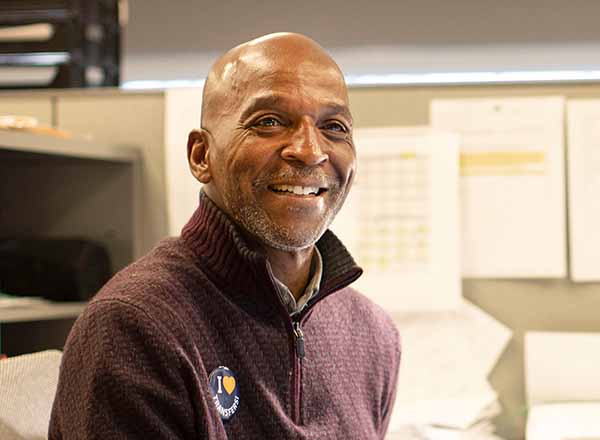 Having served as an assistant coach prior to becoming head coach of the HFC Baseball Team in 2018, Mike Abney coaches with a sense of history and continuity.

From 2010-15, he served under Steve Brown, who is now the HFC Assistant Athletic Director for Compliance and the head coach of the HFC Softball Team. From 2015-18, he served under Tim Leighton. Both coaches laid a foundation for Abney to continue building.

“I was very proud to coach under those two men. And I’m proud to say that I’ve been the head coach at HFC since 2018,” said Abney. “Coach Brown gave me the first opportunity to coach at the collegiate level. To Coach Brown, establishing a structured program was the first step to success. He also gave me a lot of leeway as to how I coached my group of players. It was great working under Coach Brown because he believed in me.”

Abney says much of the day-to-day management of the team and the process of creating a culture of success had already been established when Leighton replaced Brown as head coach.

“Coach Leighton developed the talent depth on the team, which provided insurance for injuries or other issues with starting players. We also started annual baseball camps to help with recruiting. This was very successful,” he said. “The main thing that I'm doing differently from my predecessors is that I have expanded our recruitment area significantly. I am reaching out across county and state lines to recruit new players.”

“Coach Abney’s a good guy who’s doing a good job coaching,” said Brown. “He loves baseball and has put in a lot of hard work coaching the players and building the program. I’m proud of what he’s doing.”

Giving back to the community through coaching

A native of Alabama, Abney is the fourth of five children. His family moved to Detroit when he was young. An alumnus of Pershing High School in Detroit, Abney attended Michigan State University and earned a bachelor’s degree in mechanical engineering. He later earned his master’s degree in administration from Central Michigan University.

Abney served as an Academic Advisor at HFC for almost 10 years and retired to devote more time to coaching baseball and other pursuits. He has been married to Wilma for 32 years. They live in Southfield and have two sons, Aaron and Justin.

“Like most coaches and people of my generation – Baby Boomers – we played baseball morning, noon, and night every day – and that is not an exaggeration. Growing up, I played infield and outfield. As I got older, I wanted to stay close to the game and learn the game in greater detail, so I started coaching Little League, travel baseball, high school, and then at the college level,” said Abney.

The opportunity to coach baseball at the college level was instrumental in Abney’s decision to come to HFC. Prior to coming to HFC, Abney coached baseball at the University of Detroit Jesuit High School and Academy from 2006-09.

“We did not have the in-depth instruction and training that a lot of players get these days,” said Abney. “So after playing at all those levels, I felt the need to share that information with the kids of my community and expose them to a higher caliber of baseball. This is my way of giving back to the community.”

One of Abney’s accomplishments at HFC is implementing Velocity, Durability, and Recovery (VDR) for the baseball team, especially the pitchers. The goal is to build a strength and conditioning program that provides greater durability, performance, and recovery to pitchers after a pitching outing.

“We feel we’ve created a program that will keep our players stronger and healthier than before,” he said.

Another great addition to the baseball team is bringing in alumnus Kyle Roberts – who was drafted by the Texas Rangers in the fifth round of the 2016 Major League Baseball draft – as the pitching coach.

“Kyle came on board in the Fall of 2021. After a stint in minor league baseball, Kyle returned home,” said Abney. “I saw him one day and asked him to interview for the pitching coach position at HFC, and he earned the job! It has been a nice change of pace to have him lead our pitching staff. He has the energy and motivation required in a leader. His direction of our pitching staff directly resulted in making the playoffs for the first time in seven years.”

Abney’s duties in the off season are focused on recruiting. And more recruiting.

“Did I mention recruiting?” he said, laughing. “The best part of being a coach is the daily interaction with the players on our team, as well as observing the growth they achieve during their time with the HFC baseball program.”

“Coach Abney’s dedication to the baseball program at HFC is amazing,” she said. “He has assembled talented assistant coaches and players who all believe that Hawks baseball can compete with anyone in the conference and beyond. It’s always fun to watch his teams play, and I believe we’ll be a challenge to every team we face this year.”