Notice: This article is more than one year old and is part of the Henry Ford College news archive. Information in the article may be outdated. For the most current news and information about Henry Ford College, please visit hfcc.edu/news, or contact communications@hfcc.edu.
Release Date:
Tuesday, September 7, 2021 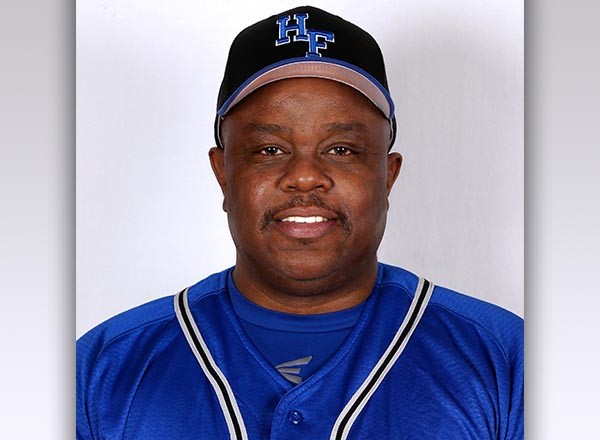 When Steven Brown, coach of the HFC softball team and Assistant Athletic Director for Compliance, retired from coaching in 2014, he soon found himself getting back in the game.

“I thought I was done coaching. I stopped coaching baseball and was going to retire, go fishing, take it easy, and spend time with my wife, kids, and grandkids. Two years later, I got bored,” Brown said. He added with a laugh, “It’s like Al Pacino in The Godfather: ‘Just when I thought I was out, they pull me back in!’”

A Detroit native who lives in Redford, Brown has been a coach for 37 years. He has been at HFC for 11 years, coaching the HFC baseball team from 2010 to 2014. After a two-year hiatus, he returned to coach the HFC softball team. Last season, the softball team became MCCAA Eastern Conference Champions.

“Without a doubt, this was the best mix of talented, energetic, dedicated, and hard-working young women that I have ever coached!” said Brown. “The players were always encouraging each other, sharing helpful tips to improve the next at-bat, trying to come up with a solution on areas of improvement, and – of course – celebrating the things that worked! The players jelled together as a team. We became a family.”

Brown was also named MCCAA Softball Coach of the Year.

“I’m honored. I wasn’t expecting it,” he said. “It’s another example of credit I have to give to HFC. When you coach at the college level, there are so many people involved. Everything came together because of this great group of student athletes. It was an honor I wasn’t looking for. I’m just thankful.”

For the love of the game

Brown is an alumnus of Saint Martin de Porres High School in Detroit, where he played baseball and football for four years. He was named All-Catholic through the Catholic High School League in both sports. He later attended Wiley College in Mercer, TX on a baseball scholarship, where he earned his bachelor’s degree in business. After graduating from Wiley, Brown returned to his alma mater and served as head varsity baseball coach for nine seasons, as well as the dean of students and athletic director.

“I became a coach for the love of the game,” said Brown. “It was just a natural fit for me. It just felt right.”

Brown took over the coaching duties of the 15U Detroit Reviving Baseball in Inner Cities All-Star Team sponsored by Major League Baseball. He led them to three consecutive RBI Junior World Series Championships.

For 30 years, Brown also coached the summer baseball league for the Detroit Police Athletic League before coming to HFC in 2010 as the head baseball coach.

Brown rebuilt the entire baseball program from the ground up. Under his leadership, the baseball team made an appearance at the 2015 NJCCA Region XII baseball tournament. (Michael Abney is the current baseball coach.)

As the Assistant Athletic Director, Brown is responsible for the certification of student-athletes, oversees the Letter of Intent program, and assists HFC Athletic Director Rochelle Taylor with other administrative function.

“I handle the compliance and assist the students with adjusting to college life,” said Brown. “I connect them with financial aid reps and counselors as needed. My job is to make sure the transition from high school to college is smooth.”

Admittedly, going from coaching baseball to coaching softball was a jolt for Brown.

“There was a learning curve involved. Managing personalities between women and men was a learning curve. I’ve been coaching men all my life. Coaching women has been a challenge, but it’s been good. My first year was the toughest year, but I managed to get through it and look what the team has accomplished this year,” he said.

Brown spoke about the best part about being a coach and being at HFC.

“The best part of coaching is to watch a young person with a lot of potential and assist them in achieving it by shaping and molding them,” he said. “It’s like planting a flower. You plant the seed, watch it bloom, and it’s beautiful.”

Brown continued: “The best part about being at HFC is we have a lot of faculty and staff members who care about students. It allows me to coach and a lot of good people embrace our student athletes. It’s a great institution. Our student-athletes get a quality education at a decent price and the opportunity to play the sports they love. They’ll get challenged in the classroom and have a great time playing sports. I have no problem recruiting people to come here. The College has been very good that way. It’s given me the opportunity to coach, the opportunity to support young men and women. I enjoy it. I enjoy being here. It’s a labor of love. I love what I do. They get a lot of out of me here at the College, and I don't mind giving it. It's just who I am."