Notice: This article is more than one year old and is part of the Henry Ford College news archive. Information in the article may be outdated. For the most current news and information about Henry Ford College, please visit hfcc.edu/news, or contact communications@hfcc.edu.
Release Date:
Tuesday, June 14, 2016 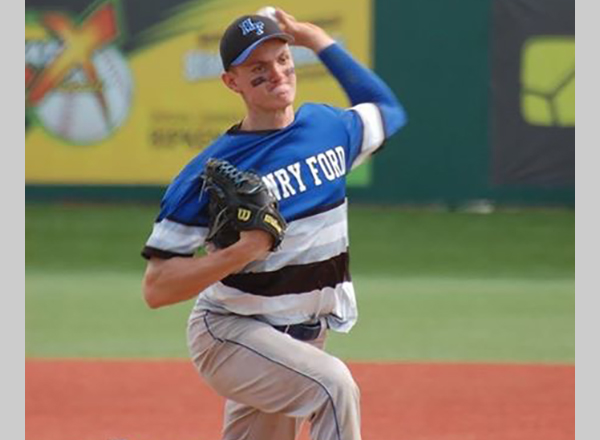 HFC Baseball Player Kyle Roberts was drafted in the 5th round of the MLB draft by the Texas Rangers in June.

The Texas Rangers drafted HFC baseball player Kyle Roberts in the 5th round of the 2016 Major League Baseball (MLB) draft.

“The Rangers looked at me last year. It wasn’t too much of a shock because they’ve gotten to know me the longest as a player and a person. They’ve stuck with me since last year. I’m pretty excited to go with them,” said Roberts, of Dearborn Heights.

A left-handed pitcher for HFC, Roberts was the Rangers’ 159th overall pick. A 2014 alumnus of Allen Park High School, Roberts graduated with his associate degree in Business Administration last month from HFC. He was a member of the Hawks Academic Team for the winter 2016 semester. The Hawks Academic Team recognizes its student athletes for earning a minimum of a 3.0 grade-point average (GPA) during the semester.

He credits HFC for allowing him to get more reps off the mound, gain more experience when facing better, fiercer opponents and actually maturing as an overall person. This year marked the first time in more than 20 years that HFC participated in the National Junior College Athletic Association (NJCAA) Region 12 Playoffs last month in Battle Creek. Even though they went 0-2 against Mott Community College in Flint and Sinclair Community College in Dayton, OH, Robert is just happy the Hawks made it that far.

“The biggest achievement is turning the program around from a losing team to a winning team. Instead of being at the bottom, we’ve changed and we’ve been in the top seven teams in the region for the last few years, and I’m grateful for that,” said Roberts.

Roberts accepted a scholarship to play baseball at Central Michigan University (CMU) – his dream school – this fall but that’s changed now that the Rangers have drafted him. He leaves for the minor leagues this week.

“During his freshman year at HFC, a couple of MLB teams – the Rangers and the Los Angeles (L.A.) Dodgers – were interested in Kyle. Limestone College in Gaffney, SC – a National College Athletic Association (NCAA) Division II program – also offered him a scholarship. However, he decided to remain at HFC and play baseball for the Hawks. This past season, scouts from nearly every MLB team would attend games to watch him pitch. He dominated hitters and was awarded All-League, All-Region and All-American honors. We are very proud of his accomplishments as a Hawk and I know he’ll do us proud as a Ranger,” said HFC Athletic Director Rochelle Taylor.

“Kyle’s a great kid and he’s worked really hard in the weight room this year – and it shows. He put on some extra muscle, which increased his velocity. He deserves everything he gets. I’m very proud of him. It was a pleasure coaching him,” said Tim Leighton, HFC head baseball coach.

Roberts was not the only Hawk who was drafted during the 2016 MLB draft. The Detroit Tigers drafted HFC alumnus John Schreiber, a right-handed pitcher for the Hawks from 2012-13, in the 15th round. From HFC, Schrieber transferred to the University of Northwestern Ohio (UNOH) on a baseball scholarship. The Gibraltar Carlson High School alumnus received National Association of Intercollegiate Athletics (NAIA) honors this year.