Notice: This article is more than one year old and is part of the Henry Ford College news archive. Information in the article may be outdated. For the most current news and information about Henry Ford College, please visit hfcc.edu/news, or contact communications@hfcc.edu.
Release Date:
Monday, March 1, 2021 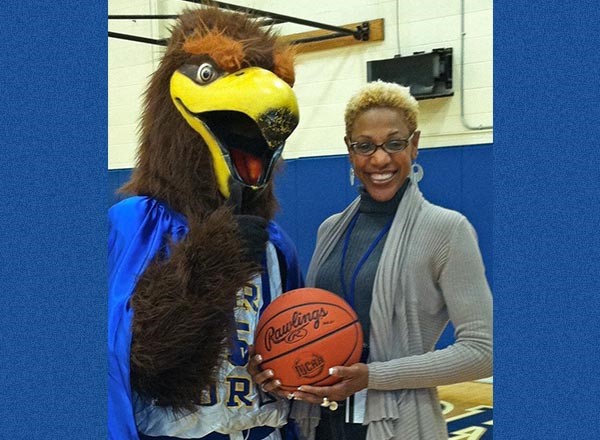 The National Junior College Athletic Association (NJCAA) Equity, Diversity, and Inclusion (EDI) Council recently named HFC Athletic Director Rochelle Taylor as one of two Region Ambassadors representing Michigan and Ohio. As an ambassador, AD Taylor will actively collaborate with the EDI Council and the Racial Equality Committee to promote and advance equity, diversity, and inclusion within the NJCAA.

Region Ambassadors will develop a framework to form the inaugural EDI Region Committees and lead their respective regions in EDI initiatives. They will fill an especially important role in setting the foundation for the role Region EDI Committees will play on a regional and national level moving forward. The intentional focus will be to educate, empower, and engage student-athletes, coaches, and athletic directors.

“In my 35 years of athletics administration, I have gone from being the only person of color and only woman in a sea of high school athletic directors to serving with diverse colleagues who inspire me daily. Along the way, I have had the opportunity to educate, empower, and engage an athletics culture on the values of equity and inclusion in my role as Director of Professional Development at the National Collegiate Athletic Association (NCAA). I have participated on national committees and boards that focused on diversity and inclusion, including the Black Women in Sport Foundation, the United States Tennis Association (USTA), and US Lacrosse,” said Taylor, of Detroit.

Taylor came to HFC in 2011. As Athletic Director, she is responsible for personnel, fiscal resources, and operations for eight men's and women's sport teams. During her tenure, Hawks teams have soared on and off the field and are consistently recognized with academic and athletic honors.

Prior to joining HFC, Taylor established Front Runner Consulting and worked with a number of national organizations and international governments. Taylor has also served as president of the National Youth Sports Corporation (NYSC). As president, she was responsible for leading a non-profit organization dedicated to preparing young people for a lifetime of learning, sportsmanship, and physical fitness. NYSC administered national programs that impacted more than 75,000 youth annually and served more than 2 million young people since 1969.

Enhancing opportunities for minorities and women in intercollegiate athletics

Taylor completed a 14-year stint at the NCAA, where she served as Director of Professional Development for four years. In this position, she was responsible for developing and implementing policies and programs to enhance opportunities for minorities and women in intercollegiate athletics. Her career with the NCAA also includes 10 years as Senior Youth Programs Coordinator. Based on her demonstration of leadership and commitment to meeting the mission, goals, and values of the NCAA and her experience handling complex tasks and issues, she was recognized as a NCAA Top Performer.

Taylor earned her bachelor’s degree in marketing from the University of Texas at El Paso (UTEP) and her master’s degree in sports administration from Wayne State University in Detroit. While at UTEP, Taylor was a member of the women's national championship track team and was a three-time All-America honoree. In 2002, she was inducted in the UTEP Athletics Hall of Fame. She also received All-American and Academic All-American honors at her alma mater, the now-closed Immaculata High School in Detroit.

“I believe that intercollegiate athletics is best served when all voices are respected and have a chance to be heard,” she said. “When we can educate, empower, and engage another generation of student-athletes, coaches, and administrators on the values of diversity and provide an equitable opportunity for the NJCAA membership, we will have contributed to a more inclusive athletics culture, and moreover, a more inclusive society.”