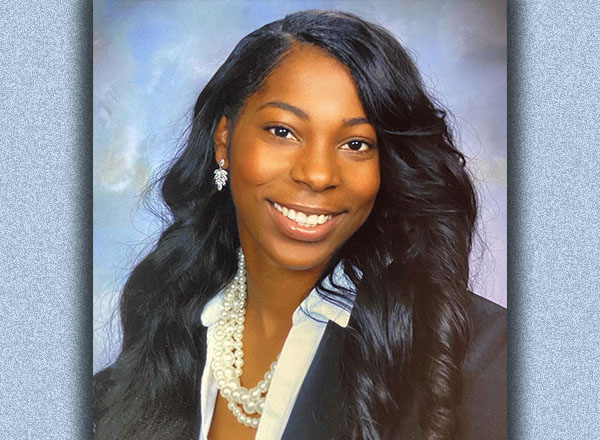 In mid-November, HFC alumna Keirra Scott was one of the keynote speakers at HFC’s inaugural Excellence of the Black Woman Conference, which was hosted by the Black Male and QUEENS Focus Group (BMQFG). HFC sociology professor/BMQFG faculty advisor Dr. Kalvin DaRonne Harvell invited Scott, of Ann Arbor, to speak. The name of her presentation was “Understanding the Assignment,” which emphasized academic persistence.

“Dr. Harvell is my mentor. He always gives me opportunities to grow, personally and professionally. He always reaches out to me to attend events or speak at them, even though I’m no longer at HFC. I appreciate that he thinks of me. It keeps me grounded, especially coming to the end of a long journey regarding my education. Soon, I’ll be closing this chapter,” said Scott.

These last several months have been personally challenging for Scott, a graduate student in the University of Michigan's Stephen M. Ross School of Business. She lost her father in September, on the heels of losing her great-aunt and great-uncle over the summer.

“It’s been rough. I’m learning to roll with it,” she said. “There are so many distractions while you’re grieving, it can be easy for you to lose your focus, your drive, and your passion because you’re dealing with so many different emotions. That’s why you must understand the assignment – not just what’s in the syllabus – but your purpose, your position in life. I wanted to extend that message because it’s been impactful for me and how I view the challenges I’ve been facing.”

Scott has been no stranger to challenges during her academic career. A 2006 alumna of Mumford High School in Detroit, Scott initially enrolled in the Everest Institute-Dearborn, a for-profit educational institution. That experience left her without any job prospects and a mountain of debt. In 2007, she gave birth to her daughter, Kiemora.

Not long after, her mother died. Scott suddenly found herself with the responsibility of being the caregiver for her younger brother, Steven, as well as being a single mother.

Determined to provide a better life for both, she gave education another shot, enrolling at Macomb Community College in Warren. However, Scott didn’t have the proper guidance, and she took classes that didn’t count toward a degree. Before she could reevaluate and regroup, she discontinued her studies when her grandmother became ill. Scott then became a plumber in an effort to provide for her daughter, brother, and grandmother. She soon figured out, however, that she did not want to be a plumber for the rest of her career.

Realizing she had to return to higher education, this time she would be smarter and savvier about it.

Scott enrolled at HFC, which was her version of a "Hail Mary pass." This time, she had the help she needed. Harvell, along with HFC political science professor Dr. Anthony Perry and former Dean of HFC’s School of Liberal Arts (SOLA) Dr. Jennifer Ernst, became her mentors. Not only did they provide her a place at HFC, but helped her find a sense of educational purpose.

While at HFC, Scott joined the BMQFG, the Democracy Institute, and the African American Association. In 2017, she was nominated by the Executive Board of the Michigan Sociological Association to become a student representative. She is the first undergraduate student to serve in that position, according to Harvell, something normally occupied by doctoral students.

Upon graduating from HFC in 2018, earning her associate degree in general studies, Scott applied to U-M. Initially, she was denied admission due to a clerical error. Undaunted, she applied again. This time, she was accepted and attended U-M on several scholarships and grants. In fact, she was one of the original students in the Transfer Bridges to the Humanities@Michigan program, an academic partnership between HFC and U-M. In 2021, she earned her bachelor’s degree in general studies from U-M. Immediately after obtaining her undergraduate degree, she enrolled in graduate school.

“I’m not a traditional student. Those are things that needed to be taken into consideration when understanding my assignment and position in life,” explained Scott. “I got a full ride to attend U-M, but before that, there was struggle on top of struggle. I want to be in a position financially to support my daughter when she goes to school. I don’t want her to worry about money the way I did.”

Once Scott earns her master’s degree from U-M in business management in 2022, she plans to enroll at U-M Law School.

“I want to be able to be a resource for people and be able to give legal representation,” she said. “I also want to work with transfer students. HFC has an opening for a college success professor, which requires an MBA. I’m looking forward to applying for that position once I graduate.”

Ready to take the world by storm

She takes a lot of pride in being a Wolverine.

“My U-M experience has been fulfilling and life-changing; it was everything I needed to keep me going in the right direction,” said Scott. “I feel prepared mentally and physically more than I ever would coming out of college. With all of my experiences at HFC and U-M, I feel ready to start my career and take the world by storm. I’m just so excited about future. I really am.”

She also takes a lot of pride in being a Hawk. She says she would not be successful the way she has been at U-M were it not for her time at HFC.

“I wouldn’t have had the same support. A lot of things come from having confidence and support in my abilities and having people believe in me. I gained that at HFC and took that to U-M. I would’ve felt lost otherwise,” she said.

In many cases, Scott directs the credit to Harvell.

“Dr. Harvell helped me prepare for my interview to get into Ross. He also helped me with my résumé,” she said. “If I was unsure about something, I’d send him a quick email. If he didn’t know the answer, he knew someone who did. He taught me how to reach out and connect with people. While that is not a natural talent for me, it is something I have developed and carried into U-M.”

Harvell is, of course, proud of his former student.

“Keirra exemplifies the title and theme of our conference, ‘Excellence of the Black Woman,’” said Harvell. “Upon completion of her MBA, Keirra will attend law school and continue to make us proud.”