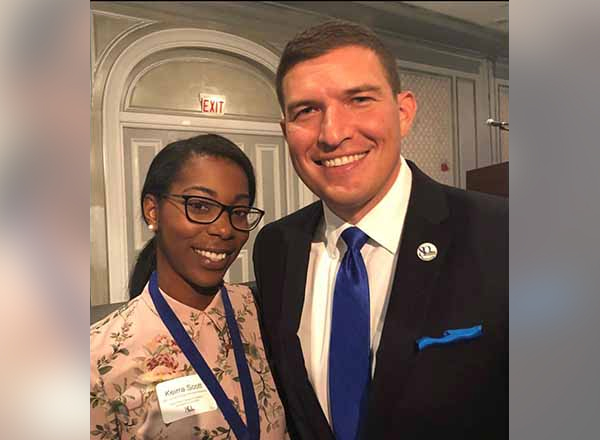 “Attending HFC was one of the best decisions I ever made because I found the support I needed. I also had great mentors – Dr. Kalvin DaRonne Harvell, Dr. Anthony Perry, and Dr. Jennifer Ernst – which I hadn’t had before. I didn’t get that at previous schools. I had no clue what I was doing. That changed at HFC,” said Scott, of Ann Arbor, who’s a single mom to daughter Kiemora, 13.

Her first foray into academia

Upon graduating from Mumford High School in Detroit in 2006, Scott’s first foray into higher education was at the Everest Institute-Dearborn (EID), a for-profit educational institution. The experience left her with a lot debt and no job prospects, and she was discouraged. Shortly afterward, she gave birth to her daughter. Then her mother died, leaving her with the responsibility of caring for both her daughter and her younger brother Stephen.

Determined to provide a better life for both, she gave education another shot – this time at Macomb Community College (MCC). Without guidance, Scott took classes at MCC that did not count toward a degree. Before she could reassess her situation, her grandmother became ill and she discontinued her studies again.

Scott then became a plumber to provide for her daughter and brother. She soon realized she didn’t want to be a plumber for the rest of her career. She decided to return to higher education. This time, she was determined to be smarter and savvier about it so she could succeed.

“I wanted to make a difference,” said Scott.

She enrolled at HFC, focusing on social change. She joined the Democracy Institute, the African American Association, and the Black Male and QUEENS Focus Group (BMQFG).

“At HFC, I was no longer flying blind,” she said. “HFC was the first place I had people helping me succeed and pointing me in the right direction. That makes a difference in your educational experience because you don’t feel alone.”

In 2017, Scott was nominated by the Executive Board of the Michigan Sociological Association (MSA) to become a student representative. She is the first undergraduate student to serve in that position, which is normally occupied by either doctoral students or doctoral candidates, according to Harvell, an HFC sociology professor and the BMQFG coordinator.

Scott successfully presented her work at the MSA’s annual meeting, the Michigan Student Success Symposium, and the Northeastern Ohio Undergraduate Sociology Symposium (NEOUSS) at Oberlin College in Ohio. All of these presentations were in conjunction with the BMQFG. In fact, Scott and Harvell presented together in a special “spotlight session” at the Michigan Students Success Symposium. With the BMQFG, she collected and delivered approximately 450 personal products to the people of Flint.

Scott was one of the original students in the Transfer Bridges to the Humanities@Michigan program, where students study the humanities and humanistic social sciences for two years at HFC. Afterward, they transfer to the University of Michigan (U-M) College of Literature, Science, and the Arts (LSA) in Ann Arbor, where they complete their bachelor’s degree.

After earning her associate degree in general studies from HFC in 2018, Scott applied to U-M. She was initially denied admission due to a technical error. Undaunted, Scott applied again. This time, she was accepted to U-M, where she is studying on several scholarships and grants, including:

Scott is a student transfer advisor for the Transfer Bridges program and works as a field organizer for the Michigan Democratic Party. The National Institute for the Study of Transfer Students (NISTS) recently selected her to be a 2021 National Transfer Student Ambassador.

She will graduate in 2021, earning her bachelor’s degree in general studies from U-M. Afterward, Scott will begin work on her MBA at U-M’s Ross School of Business. Once she’s finished her MBA, Scott would like to attend law school at U-M.

“Keirra is the quintessential scholar. She works hard, she’s committed to excellence, and she has a clear vision of our sacred mission,” said Harvell. “I have followed her journey since her time at the College. Through the BMQFG, I had the pleasure of watching her develop into a great public speaker, community organizer, and social justice practitioner. Her abilities are rarely seen at the undergraduate level. Keirra continues to make us proud with her accomplishments at U-M!”