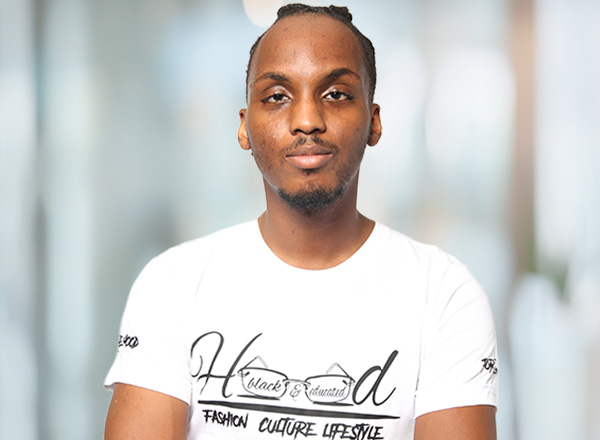 One of HFC’s recent alumni, Bryon Brooks – who is currently a graduate student at the University of Michigan in Ann Arbor after first making headlines about being homeless in 2018 – earned a Rackham Professional Development Diversity, Equity, and Inclusion Certificate from U-M’s Rackham Graduate School in 2022.

“I felt that the certificate program would help me enhance and deepen my leadership skills, as I aspire to dismantle the current system within the realm of education and build upon a new one rooted in equity,” said Brooks, of Ann Arbor.

After completing this certificate program, Brooks has enhanced his knowledge base in DEI to prepare him for a global job market, and is better able to accurately define and conceptualize DEI terms.

“I look forward to utilizing the skills and knowledge I've obtained from the program to not only help create a more welcoming and equitable society in the realm of education but in society as a whole,” said Brooks, a staunch advocate of equity and education.

Last year, Brooks – who earned an associate degree in music and a certificate in recording arts from HFC in 2018 – graduated from Ferris State University, where he earned a bachelor's degree in music and business management. He was able to walk at Ferris’ commencement ceremony this year, as he was unable to walk last year due to the pandemic.

Several scholarships and grants are making it possible for Brooks to attend U-M, including:

Brooks also works in U-M’s Edward Ginsberg Center, a community and civic engagement center with a mission to cultivate and steward equitable partnerships between communities and U-M to advance social change.

“This position gives me the opportunity to work directly with students, as well as coordinate, assess, plan, and implement workshops all across the U-M campus,” said Brooks.

“Byron continues to exhibit a level of tenacity that is contagious,” said Harvell. “I have watched him over the years and continue to be amazed at his scholarship, commitment to the community, and understanding of what it means to embrace the ethic of social justice. Byron causes me to question my work ethic. Additionally, Byron is a good person. He exudes confidence and goodwill. Arrogance is beneath him; I do not even think the word is in his vocabulary.”

A champion for the homeless

Brooks was born while his mother was in prison. He was raised by his great-grandparents. When Brooks graduated from Cody High School in Detroit in 2013, he was living with his mother, who was out of prison. In 2015, he enrolled at HFC, but his mother was opposed to him pursuing higher education, believing he should be working in a factory instead of pursuing an education.

When Brooks refused to drop out of HFC, his mother asked him to move out of the house. He was homeless for almost two years. He stayed in parks, bus stations, and abandoned buildings. He worked several odd jobs to make ends meet. Once the HFC faculty and staff found out about his struggles, they helped him wherever they could, referring him to the counseling office. They even helped him buy a car and helped him find an apartment in his native Detroit.

“So many people at HFC showed me so much love and support while I was homeless,” said Brooks. “I’m paying that forward.”

As someone who knows the plight of the homeless all too well, Brooks has been a tireless advocate. In 2018, Brooks founded a non-profit organization in Detroit called From The Hood For The Hood. This summer, Brooks looks forward to the third annual For The Hood Tour.

“This year’s tour will take place in marginalized, under-resourced, and underrepresented communities across the country,” said Brooks. “Currently, we plan on making stops in Detroit, Dearborn, Philadelphia, Chicago, Atlanta, Miami, and Canton, OH. Hopefully, with the help of generous donors, we can expand our reach to other cities.”

HFC is always close to his heart

Earlier this year, Brooks was named to Crain’s Detroit Business’ “30 Under 30” list. In 2021, the Biden-Harris Presidential Inaugural Committee asked him to lead a national service initiative on Dr. Martin Luther King, Jr. Day. More than 50 people volunteered for Brooks’ “Hoods United Through Service” campaign, handing out more than 3,000 face masks.

“That was a great honor in my life,” said Brooks. “One of the high points.”

No matter what great heights he has achieved, Brooks will always remember HFC as the launching pad. At HFC, he was president of Student Council and was active in the BMQFG. HFC was a very transformative time for Brooks, and he holds the College in the highest regard.

“HFC will forever be my home away from home and the training ground that helped me become the leader and agent of change I am today. I thank God for endurance, and for all that He has done within my life. For it is he who sustains me, and he is the reason I've made it thus far! I'm grateful that God had it within his authority to intertwine my path with that of HFC.”

“It is an honor to call him my friend," said Preston. "Byron is one of those rare students who always puts the needs of others first. Even as a former student, he still holds HFC close to his heart. He helps students in need of guidance with their financial aid by putting them in contact with our office. He advocates on others' behalf and works to strengthen the system to be as inclusive and equitable as possible. He does all of this while continuing his own educational journey. For someone who has experienced so many barriers, he continually proves that the only limitations are the ones we set for ourselves.”