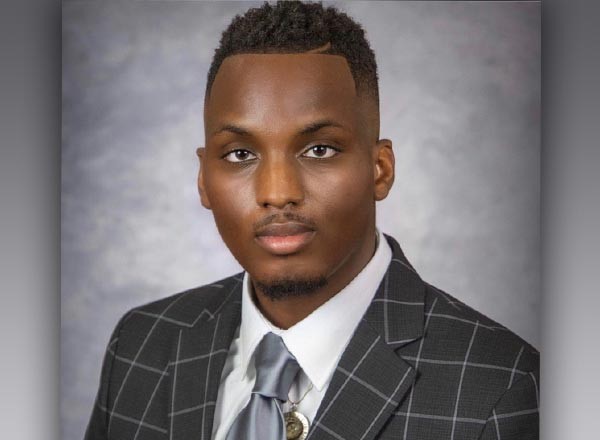 HFC alumnus Byron Brooks has been one of the College’s most visible alumni in recent years.

He went from being homeless to being accepted as a transfer student at a number of prominent educational institutions that include Harvard University, Howard University, Southern Illinois University, Columbia University, Michigan State University (MSU), and the University of Michigan (U-M). His story elicited substantial media attention as a result. His mission to help the homeless has not only made the news, it has garnered him awards.

At the beginning of 2021, the Biden-Harris Presidential Inaugural Committee called Brooks to a lead a national service initiative in Detroit on Dr. Martin Luther King, Jr. Day 2021.

Recently, Brooks – who earned his associate degree in music and a certificate in recording arts from HFC in 2018, and will graduate this spring from Ferris State University (FSU), earning his bachelor’s degree in music and entertainment business management – has announced he will attend graduate school this fall at U-M Ann Arbor. There, he will pursue a master’s degree in higher education with a concentration in social justice and diversity, as well as a master’s degree in social work with a concentration in community change.

“U-M is allowing me to pursue two master's degrees simultaneously. Not to mention that the U-M School of Social Work (SSW) is the No. 1 school in the nation. Its location also gives me a unique opportunity where I am both far enough from home to experience a new culture and living experience, yet close enough where I can always visit or reach out to my village for support when needed. An added plus is that my granddad is a huge U-M fan, so in essence, he's able to live out this experience through me, which gives me great joy,” said Brooks, a Detroit native who currently lives in Big Rapids.

Brooks is no stranger to U-M. In 2018, he founded From the Hood for the Hood (FTHFTH), a non-profit organization dedicated to helping the homeless, through U-M’s Englehardt Social Justice Fellowship.

Brooks has also accepted a position at U-M’s Edward Ginsberg Center, a community and civic engagement center with a mission to cultivate and steward equitable partnerships between communities and U-M in order to advance social change for the public good. The Ginsberg Center will give him the opportunity to work directly with students, as well as coordinate, assess, plan, and implement training sessions and workshops across the U-M campus.

“Helping the homeless is just one aspect within the full spectrum of what I believe to be my purpose,” said Brooks. “I look forward to this experience molding me into a better all-around agent of change. My goal is to take the knowledge and resources of which I obtain from both programs and utilize them to help me with my mission of bridging the gap between race, faith, and justice.”

He continued: “I would like to one day work at a major university as a multicultural student services director or in some form of administration that would allow me to work with the next generation of students directly. Who knows, I may even teach one day. I also plan on eventually establishing my own practice within the realm of social work to dismantle systemic racism and help underdeveloped and under-resourced communities and individuals rise from their situations, thus creating a society filled with equity. Another goal of mine is to implement an initiative here in Michigan that was started by one of my mentors, Dr. Daymond Glenn, called ‘The Cultural Soul Project’ (a ministry intersecting at race, faith, hip-hop, and justice), which he founded in Portland, OR.”

Brooks was born while his mother was in prison and was raised by his great-grandparents. While Brooks attended Cody High School in Detroit, he was living with his mother who was out of prison at one point. In 2013, he graduated from Cody. In 2015, he enrolled at HFC. However, his mother was opposed to him pursuing higher education, feeling he was better suited to working in a factory.

When he refused to drop out of HFC, his mother kicked him out of the house. Brooks was homeless for the better part of two years, staying in parks, bus stations, and abandoned buildings. He worked several odd jobs to make ends meet. The HFC faculty and staff learned of his plight and helped him wherever they could. They referred him to the counseling office and even helped him purchase a car. Eventually, he moved into an apartment in Detroit.

Once his life situation was more settled, Brooks was elected president of the HFC Student Council. One of his proudest accomplishments during his presidency was helping implement the Diversity Taskforce Plan. Brooks has reiterated time and again that if it weren’t for HFC, he would not have become successful in his academic and philanthropic pursuits.

“HFC provided me with the tools needed to not only matriculate and transfer to Ferris, but become a productive, and socially aware member of society. I am still and forever will be proud to be HFC!” he said.

Brooks also has a message for the HFC community.

“HFC is forever my extended family,” he said. “If you all ever need someone to come and talk to current students or to be a mentor, please don't hesitate to reach out.”