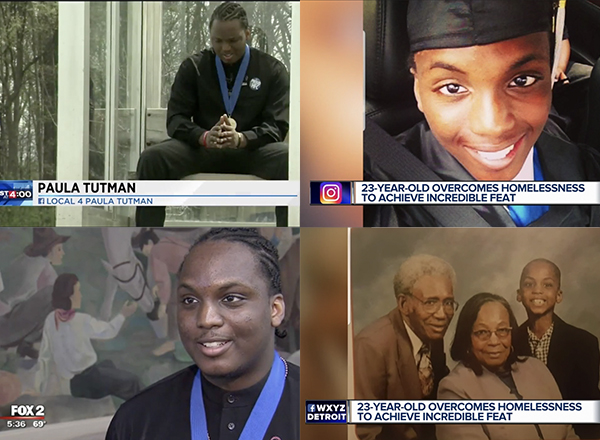 If anyone has proven that you can overcome overwhelming odds and not only survive but thrive, it’s Byron Brooks.

And now, Brooks is getting a great deal of public recognition for his incredible story. He's been covered by local TV stations Channel 2 (FOX News), Channel 4 (NBC-WDIV), and Channel 7 (ABC-WXYZ), as well as the Dearborn Press and Guide.

Brooks was born while his mother was in prison, and was raised by his great-grandparents. For more than a year during his time at HFC, he was homeless, staying in parks, bus stops, and abandoned buildings.

To make ends meet and pay for his tuition, Brooks worked several jobs. Many would have thrown in the towel at this point, but not Brooks. He gutted it out, but he didn’t do it alone. The HFC faculty learned of his plight and helped him wherever they could. They referred him to the counseling office, and even helped him purchase a car.

Their belief in him bolstered his sagging courage.

“The support of the faculty pushed me and encouraged me to keep going and not give up on my dreams,” said Brooks, who now lives in an apartment in Detroit. “Their support is what pushed me to run for Student Council, because I wanted to pay back that love to the student body and make a difference so no other student would have to go through what I went through.”

Brooks’ soft-spoken, deeply respectful demeanor belies an intense drive that has led him to success in and out of the classroom.

Brooks eventually ran for president of the HFC Student Council, and won the election. Some of his accomplishments during his presidency include implementing the Diversity Taskforce Constitution, sponsoring the Heroes Profile Showroom for the newly-formed Animation/Comic Book/Gaming Club, and participating on the 2017-18 Presidential Advisory Search Committee.

Brooks’ ultimate goal is to open a non-profit youth artist development center for at-risk youth who aspire to careers within mainstream music. Music has always been Brooks’ great passion. At age 4, his great-grandmother taught him how to play the piano.

“From there, I taught myself several other instruments: drums, guitar, trumpet, saxophone, trombone, harmonica,” said Brooks, who also sings at Dexter Avenue Baptist Church in Detroit.

As he graduates with his associate degree in music and recording arts on May 5, 2018, Brooks wanted to acknowledge some of the HFC faculty members who have made a positive impact in his life:

“I couldn’t have done it without these teachers and mentors. All of them helped me become who I am today,” he said.

Prestige is only part of the equation

Brooks’ education is a top priority, and he will continue his pursuit of a bachelor’s degree after graduating from HFC.

His choice? This fall, he will enroll at Ferris State University in Big Rapids, studying music industry management.

“All of these schools are prestigious schools, and I’m honored to have been accepted by them,” said Brooks. “I chose FSU because its program lines up so closely with my goals. I want to be both a musician and a businessman. This way, I can come back and help my community.”

“It all goes back to HFC,” said Brooks. “It’s a great school with great qualities and unique characteristics that are beneficial to all students. There’s a real sense of family here; I see my fellow students as my siblings. The teachers want you to succeed here, and they will go out of their way to help you succeed. I’m proof of that. You’re not just a paycheck to them; you’re a person. They want you to succeed. They want all their students to succeed. They wanted me to succeed. HFC is what made me who I am today.”