Shayma Mustafa and family: dream outside the box 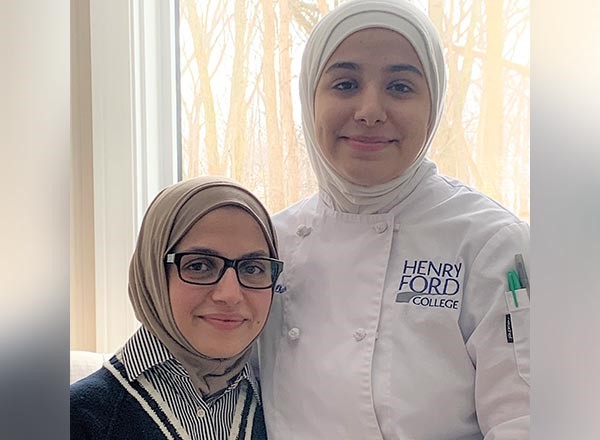 HFC is a family affair for alumna and pre-elementary education instructor Shayma Mustafa (left) and her daughter Zayneb Abu-Khader (right), who is currently enrolled in HFC’s Culinary Arts program.

Not only is teaching in Shayma Mustafa’s blood, so is HFC.

“I come from a long line of educators. My dad is a professor. My mom is a teacher. All my sisters are teachers. Education is in our blood. We eat, breathe, and sleep teaching. That’s so cliché, isn’t it?” said Mustafa, of Dearborn, an instructor in HFC’s Pre-Education program.

Born in Baghdad, Mustafa, the third of five daughters, immigrated to the United States with her family when she was 5. She graduated from the Al-Ikhlas Training Academy in Detroit, one of the oldest private Islamic schools in the U.S. After graduating, she enrolled at HFC, where she earned her associate degree in pre-elementary education. Her mentor was HFC Pre-Education Program Director Dr. Patricia Lanzon, who is now her supervisor.

Mustafa transferred to Wayne State University, where she earned her bachelor’s degree in elementary education and social studies and her master’s degree in educational leadership and administration. She is now working on her doctorate in educational leadership and administration at Trevecca Nazarene University (TNU) in Nashville, TN with a projected graduation date of late 2022.

“I owe a debt of gratitude to Dr. Lanzon. She helped put me on track. She told me that I needed to get my head in the game and to finish the pre-ed program, which I did. I couldn’t have done it without her,” she said. “I love it here at HFC. The teachers are exemplary.”

HFC is a “large, close-knit family”

For 15 years, Mustafa taught elementary school in private, public, and charter schools in the Metro Detroit area before going into higher education. For more than two years, she has taught at both HFC and Wayne State. Lanzon recruited Mustafa to teach at HFC.

“I jumped at that chance! I always wanted to teach at HFC. I owe a debt to HFC and I want to pay that debt by returning to teach at the College. I love Wayne State, but HFC is my home soil. I started at HFC and I want to end up at HFC because it’s family. It’s a large, close-knit family,” said Mustafa.

Not only did Mustafa attend HFC, but so did her husband, Mohamed Sohoubah, and the eldest of their five children, Ayaat Abu-Khader. Sohoubah completed pre-pharmacy coursework and works as a pharmacist. Ayaat Abu-Khader earned her associate degree in applied science at 16. Following in her mother’s footsteps, she attended Wayne State and recently earned her bachelor’s degree in communications sciences and disorders.

“For a child to be excited about going to college at 14 years old, that’s amazing. She’s very enthusiastic about the program. The instructors treat her like she’s family, which warms my heart,” said Mustafa, who homeschooled her oldest two children.

Once her three younger children – Mousa, 6; Maryam, 5; and Munir, 4 – are college-bound, Mustafa plans to send them to HFC. When Mustafa spoke to President Kavalhuna during a recent "First Fridays" event, President Kavalhuna joked that Mustafa's family was on HFC’s “frequent flyer” program. He is honored that she entrusts her children's education to the College.

Role model and agent for change for young Arab-American women

In addition to her role in academia, Mustafa is a published author. She wrote the children’s book, Excuse Me Ma’am, Excuse Me Sir: I’m Amina, An All-American Girl. She named the titular character in the book after her youngest sister, Amina. The inspiration behind this book stemmed from people constantly asking Mustafa’s children where they are from because they look and dress differently.

“I have struggled to prove my American identity to people. I am a naturalized American citizen. My kids were born here, so they’re American citizens. People seem to have a hard time believing that,” said Mustafa. “We don’t have this conversation enough in the Arab-American community, which I think is culturally relevant.”

Mustafa has also pushed young Arab-American women out of their comfort zones while they are students at HFC. She has informed them that the College is not their final destination, encouraging them not only to get their bachelor’s degrees, but also their master’s and doctoral degrees. Mustafa has assisted several young women when applying to Wayne State, the University of Michigan-Dearborn, and Michigan State University, serving as their mentor.

“No one ever sat down with me and told me this when I was a student,” said Mustafa. “I never had an Arab-American female professor before. We talk about diversity and inclusion, yet no one looked like me. I wanted to change that when I came to HFC to teach. Young women have approached me and told me what an impact seeing me in this role has had on them. Many of them have been placed in a box. Education is the way to get out of that tiny box. I’ve told them and my own children, ‘You have the whole world ahead of you – go for it. Dream outside the tiny box you were boxed in. There’s no limits.’”

While Mustafa does miss teaching at the elementary level, she is still involved in it to some degree. She does in-classroom visits with her teacher candidates, allowing her to interact with elementary kids.

“I love academia,” she said. “I get the best of both worlds.”

Her ultimate goal is to become a full-time professor and, eventually, a dean at HFC.

“I love it here at the College. It’s home for me. It’s family,” said Mustafa. “Even if I had a full-time job elsewhere and an opening at HFC came up, I would leave that position to come teach here.”