Notice: This article is more than one year old and is part of the Henry Ford College news archive. Information in the article may be outdated. For the most current news and information about Henry Ford College, please visit hfcc.edu/news, or contact communications@hfcc.edu.
Release Date:
Thursday, June 11, 2020 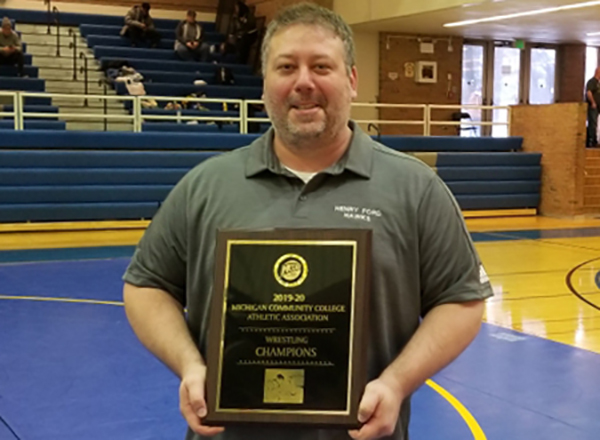 HFC wrestling coach Grant MacKenzie, the MCCAA Coach of the Year, was a guest recently on "The Combat Sports Podcast."

Host Neil Kiernan interviewed MacKenzie for more than an hour about wrestling for Edsel Ford High School in Dearborn and at Olivet College, his career as a physical education teacher in the Allen Park Public Schools Schools, and his career as a wrestling coach that has spanned 22 years. Of those 22 years, he has coached at HFC since 2013. In fact, he’s the founding coach of the HFC Wrestling Team (which originally started out as a club before becoming a varsity sport).

In the 2019-20 season, the HFC Wrestling team won the MCCAA State Championships. In 2019, Mackenzie began the process for Silver Coaches Certification from USA Wrestling and also established the HFC Training Center as a USA Wrestling Chartered Club. They spoke about those milestones as well.

MacKenzie explained that he wanted to wrestle locally after graduating from EFHS. He looked into wrestling programs at HFC and the University of Michigan-Dearborn (UM-Dearborn), but neither school had a team. So he attended Olivet, a Division 3 school, as a walk-on.

MacKenzie described his road to coaching at HFC as an accident. His coaching career began in 1998 as the assistant coach for the Allen Park High School wrestling team. But MacKenzie had his eyes on being a head coach. In 2010, he was hired at UM-Dearborn as its first wrestling coach and founder of the UM-Dearborn Wrestling Club.

“HFC demonstrates that athletes who still want to wrestle after high school can do so locally. They don’t have to go to a 4-year college or university. They can gain a great athletic experience at the community college level before moving on to a 4-year school,” said MacKenzie.

He also pointed out that athletes who wish to go into the skilled trades and not pursue a bachelor's degree a 4-year school can still wrestle.

“For a lot of them, that’s the breaking point,” explained MacKenzie. “The majority of 4-year schools don’t offer skilled trades. We do here at HFC. They can get the best of both worlds here: They can pursue a career in the skilled trades and continue wrestling after high school, scratching that itch, if you will, and be part of a great program.”

The chance to become an All-American

The HFC Wrestling team not only travels around Michigan, but also to Ohio, Illinois, and New York frequently during the season. They compete with Division I-III schools, as well as community colleges.

“Our tournaments always have mixed divisions (NCAA Division I II, III, NAIA and NJCAA),” said MacKenzie. “Our schedule is challenging.”

“You can go to a 4-year school and you can be a benchwarmer, and you can be the takedown dummy for the seniors on the team,” said MacKenzie. “Or you can join my program… and face the toughest of the tough, and you have a chance at the end of the season to become a national qualifier. You have a chance to become a junior college All-American – and you will remember that for the rest of your life!”

It is very common at the end of post-season tournaments (NJCAA Championships) for coaches from 4-year schools to recruit HFC sophomore wrestlers to join their program.

“As a freshman at a 4-year school, you have to pay a lot of dues before making it into the varsity lineup, unless you’re exceptionally talented,” said MacKenzie. “By coming to HFC, you can have two good years here and still have two more years at a 4-year school.”

MacKenzie’s hard work as a recruiter hasn’t gone unnoticed. His wrestling program has received a lot of positive press and positive word of mouth. In fact, for the 2020-21 season, 16 new wrestlers have joined the Hawks.

“There’s been a plenty of positive press about the program, and things are trending the right way,” he said.

MacKenzie’s leadership style is “calm and confident.” He believes athletes enjoy being part of this program because of his ability to build positive relationships.

“I always want to be the voice of reason and super calm and always there for them,” he said. “To me, The Giving Tree is the greatest leadership book ever. In it, the Tree gives until it had nothing left to give. That’s my philosophy right there. The mindset of an athlete is very selfish and opposite of a coaching mindset which is very giving. The best coaches are athlete-centered. What makes very good athletes struggle to become good coaches (is) they don’t know how to give; it’s their way or the highway. They can’t get along with the (athletes) or their parents.”

His ideal type of athlete to recruit is “quiet and confident.”

“I search for wrestlers who want a chance and who are humble enough to be coached,” said MacKenzie. “It’s one thing to be passionate about the sport, but I won’t tolerate anyone with ego problems on my team. That’s not why we’re here.”

Several of the greatest moments in MacKenzie’s coaching career occurred in this past season alone:
• The HFC Wrestling team won the MCCAA State Championships
• Breakout star Dante Rivera-Garcia became the first Hawk to be named No. 1 at the National Junior College Athletic Association (NJCAA) level
• Rivera-Garcia was the first Hawk to win at the Adrian Invitational at Adrian College
• Rivera-Garcia was named MCCAA Wrestling Freshman of the Year
• MacKenzie was named the MCCAA Coach of the Year

“We finally won a championship! It was HUGE! That proved it can be done at HFC!” said MacKenzie. “It brought a lot of attention (to the wrestling program). It proved (HFC) is a place where you can go and compete. You don’t have to go to the big name schools. You can go to this college and create a big name here.”