Notice: This article is more than one year old and is part of the Henry Ford College news archive. Information in the article may be outdated. For the most current news and information about Henry Ford College, please visit hfcc.edu/news, or contact communications@hfcc.edu.
Release Date:
Monday, November 25, 2019

HFC wrestler grapples his way to the podium 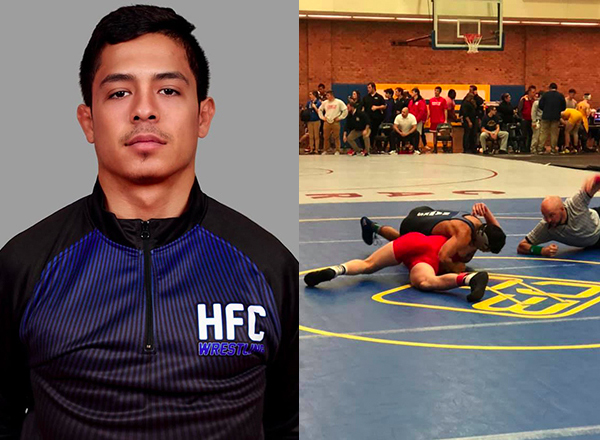 “It was a pretty tough tournament. The bracket’s stacked with good wrestlers,” said Rivera-Garcia, of Allen Park, a 2017 alumnus of Southgate Anderson High School who’s in his first year at HFC.

“I was looking forward to wrestling those two other guys, who were major contenders, but my opponents beat them and I had to wrestle them instead. I had to change my focus and approach it one match at a time. I knew it would be tough,” said Rivera-Garcia.

Rivera-Garcia beat Wieczorek in overtime and Kempker 10-2 by a major decision.

“I felt good to able win in that bracket with that caliber of wrestlers,” he said. “Now, I can keep the ball rolling for the rest of the season.”

Rivera-Garcia is the first Hawk to win the Adrian Invitational at Adrian College.

“We’re really building the wrestling program here at HFC. Downriver’s a hotbed for wrestling. We’re trying to get more Downriver guys to consider our program. It's a good program, and we’re focused on improving it even more,” said Rivera-Garcia.

“Donte is proof that local wrestlers do not have to move away from home to wrestle at the collegiate level,” said MacKenzie. “I’m grateful he chose HFC. I am impressed with his leadership skills on this young team.”