Airborne Ranger returns to HFC after 37 years and multiple careers

After nearly 37 years since he was a student at HFC (when it was Henry Ford Community College), Tom Demerly, a former Airborne Ranger, is returning to the College to finish his associate degree in liberal arts.

“I have one class left. It’s a math class with Nahla Haidar,” said Demerly, of Dearborn, who returned in 2019. “If all goes as planned, I’ll graduate this spring.”

After completing his associate degree, Demerly plans to take more classes at HFC. Then he plans to transfer to Wayne State University.

“Higher education has changed a lot. When you leave HFC with an associate degree or professional certification, you have a tool in your pocket that’s highly adaptive,” explained Demerly. “You can do a number of things with it – you can either go directly to the workforce or transfer to a four-year university. HFC has always had a good mix of traditional academics and trades. It has a realistic understanding of how the economy works. Getting a two-year degree here keeps you agile and adaptive.”

A 1979 alumnus of Dearborn High School, Demerly was a student of the late Russ Gibb. Gibb – a donor to HFC, owner of the Grande Ballroom in Detroit, and DJ who began the “Paul is Dead” myth in regards to Paul McCartney of the Beatles – taught media production at Dearborn for almost 40 years. He created a state-of-the-art video studio called WDHS in 1981. It was the first high school video production facility in the United States.

“Gibb didn’t let anyone fall through the cracks. He saw something in me, and he tried to find it. What he uncovered was an interest in media, the ability to write, and a strong sense of curiosity that remains to this day,” recalled Demerly.

According to Demerly, Gibb was the most significant teacher who altered the trajectory of his life.

“He managed to reinforce discipline and respect, while at the same time fostering independent thought. He instilled in us the reality that learning is ongoing – it never ends. Just because school ends, the evolution of technology and media never ends. If you want to remain relevant, you must remain current in education,” said Demerly.

Proud to serve in the military

Demerly first attended HFC from 1980-83, where he began studying journalism and media arts. Pursuing his interest in military history and intelligence, he enlisted in the U.S. Army before finishing his associate degree.

“The military was calling. I wanted to be in the military. We helped end the Cold War: all people in the military across that era did. For me, it was significant to be a small part of that,” said Demerly, who served on active duty for four years.

His military experience includes being an honors graduate from the U.S. Army Infantry School at Ft. Benning, GA, and a Scout Observer for Company F, 425th Infantry (RANGER/AIRBORNE), Long Range Surveillance Unit. Demerly is a noted expert on military aviation, defense technology, and intelligence. He served in an intelligence-gathering unit as a member of the U.S. Army and the Michigan National Guard. 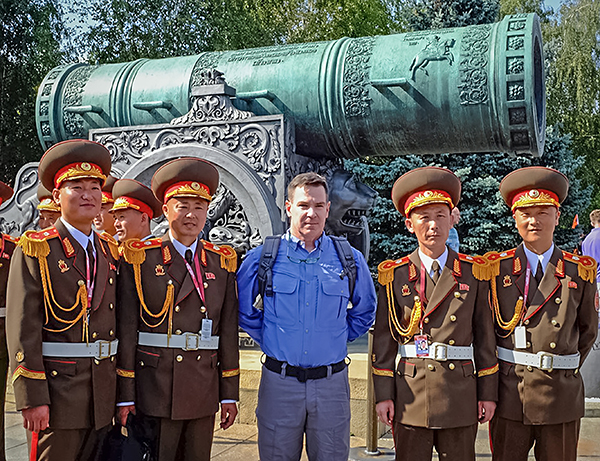 Demerly is flanked by a delegation of North Korean military officers who were visiting the Kremlin in Moscow, Russia, in July 2019. 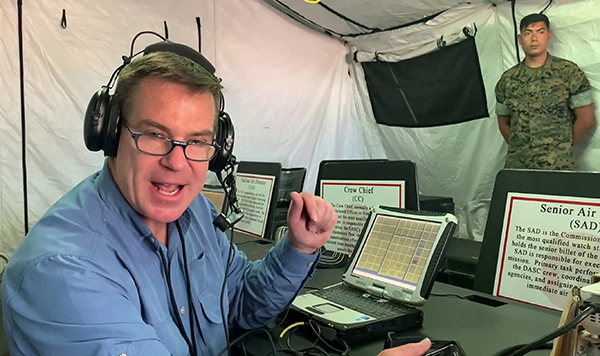 Demerly on the job in an undisclosed location.

Demerly has kept active since his military days, having competed in endurance events and marathons on all seven continents, including:
• The 152-mile ultra-endurance Marathon des Sables
• The 105-mile Jordan Telecom Desert Cup
• The Discovery Channel Eco Challenge
• The Raid Gauloises Vietnam
• “The Last Marathon” in Antarctica

He also climbed Aconcagua in Argentina. At 22,841 ft., Aconcagua is the highest mountain in the western hemisphere in addition to being the highest peak on two other continents. He’s a four-time Michigan USA Cycling Champion and has completed more than 250 triathlons the world over, including the Ford Ironman World Championships in Kona, HI, and five other Ironmans. In 1990, Demerly raced for the elite level Nike/Velo-News/Gatorade Cycling Team in Belgium.

After completing his military service, Demerly entered the business world. He owned Bikesport, Inc., a U.S. bicycle specialty store, from 1992 to 2010 in Dearborn.

“We did a lot of e-commerce,” he recalled. “In fact, you could say we were one of the pioneers of the e-commerce age.”

The aftermath of 9/11 and the automotive recession in 2008 had an adverse effect on Bikesport’s bottom line, so he closed it down. He then worked at TriSports.com in Tucson, AZ, for nearly three years. Returning to Michigan, Demerly worked for Bike and Tri Shop in Livonia for four years.

In fact, he’s written the most-viewed features on TACAIRNET.com with more than 5,000 views per day. His work has been shared by aviation legend Chuck Yeager and John D. Gresham, the late Tom Clancy’s technical advisor. Demerly was a beta-reader and consultant for the late author and senior diplomat Robert F. Dorr’s 2015 novel, Hitler’s Time Machine. 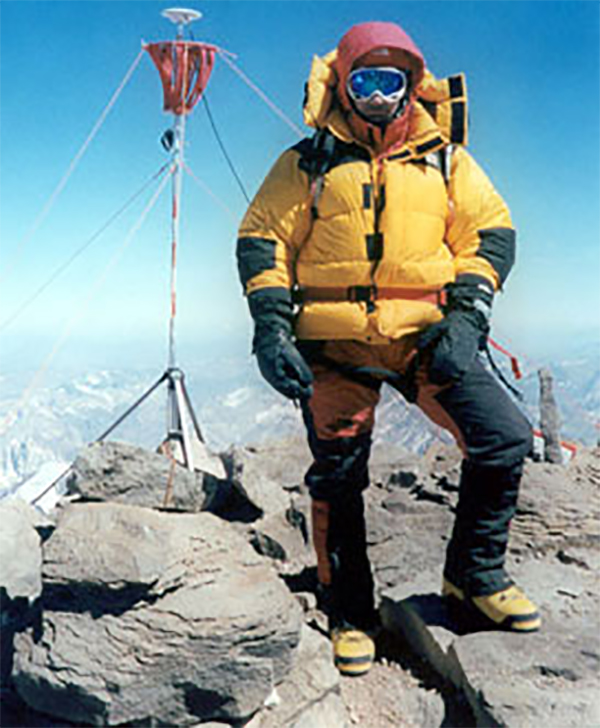 Demerly on the summit of the highest mountain in the Western Hemisphere, Aconcagua, at 22,841 feet. 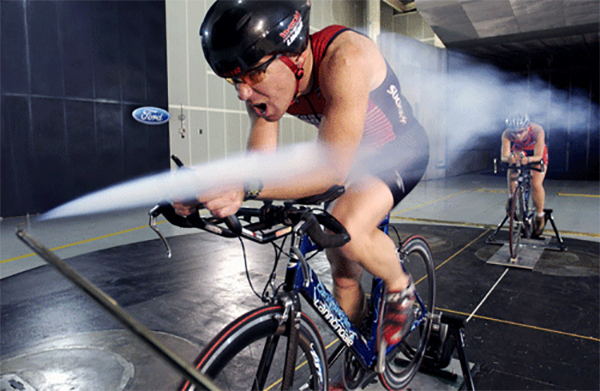 Demerly participates in wind tunnel tests at a Ford Motor Company facility in Dearborn, Michigan for World Triathlon Corporation. He has raced for the elite level Nike/Velo-News/Gatorade Cycling Team in Belgium, multiple triathlons, and owned a bike shop for a period of time. 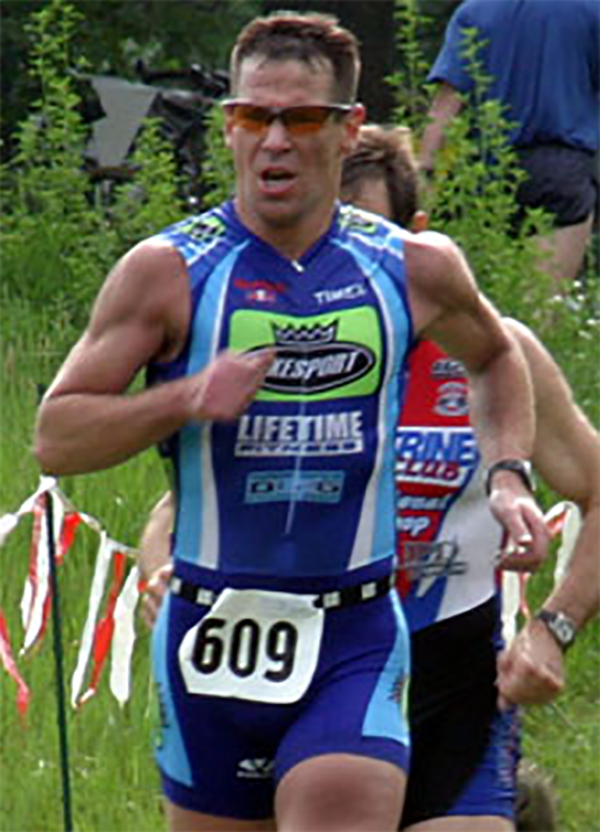 Demerly is an accomplished marathoner and ultramarathoner.

Since 2016, Demerly has been the U.S. correspondent for one of the world’s most widely read defense and aviation online publications, David Cenciotti’s TheAviationist.com, which is published in Rome, Italy and syndicated to media outlets that include Business Insider, Wired, and the BBC World News.

“I started having some success in military journalism. As a full-time freelancer, I cashed in and walked out and never looked back. It was a good decision,” said Demerly. “One of the great things about working for TheAviationist.com is my editor has given me a long leash that reaches from Rome to Dearborn. He gives me carte blanche.”

For three weeks in late 2019, Demerly was in Russia. There, he covered Russia’s defense and aerospace industry. According to Demerly, Russia is working hard to generate a revenue stream from its aerospace export.

“Pretty much everything I learned about Russia before visiting there turned out to be wrong. The Russian economy is doing well. The Russian people I talked to can’t understand why we don’t like them and why there’s an adversarial relationship between our two countries. They believe that the Cold War has been over for a long time, and we’re not enemies any longer. I was amazed and encouraged by their cooperation and willingness to work with us,” he said.

During his assignment in Russia, Demerly said he stood 10 feet away from Russian President Vladimir Putin and photographed him.

“Putin saw me and waved to me, which was chilling,” said Demerly. “During the Cold War, he was stationed in East Germany and I was stationed across the border wall in West Germany.”

For Demerly, Dearborn is home

Demerly also consults to the defense industry in soft goods, uniform, and personnel/equipment categories for the special operations community working for Tactical Performance Corp. in California.

“So much of what I learn here at HFC, I take home that day and use it for work. That’s a pretty good return on investment,” said Demerly.

“I was born here. I could live anywhere I want. I want to live here. Dearborn has become more dynamic than any place you can live in the United States. We think of California as being dynamic, but in Dearborn, we have an enormous immigrant population that’s integrating into the overall population,” he explained. “This is the future of the America. We’ve embraced immigration and have became a multi-cultural society. Everyone gets along, and it works. I still have reverence for the old Dearborn: Henry Ford, Ford Motor Co., etc. However, I like the new Dearborn better. The new Dearborn is leading the nation and the world on how to integrate diverse populations together to work constructively. If the rest of the world worked like Dearborn, we would have fewer problems.”