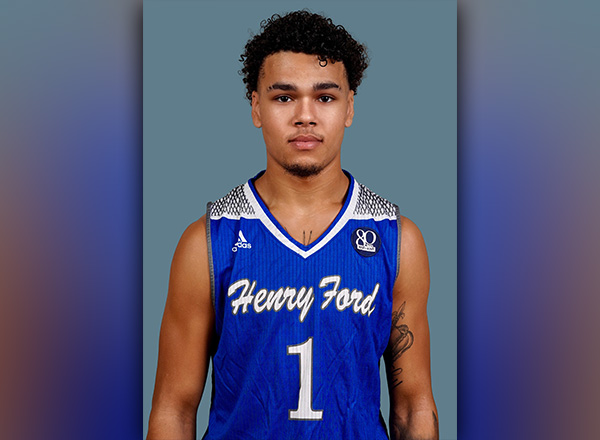 HFC’s Mak Manciel is the third basketball player to be named the National Junior College Athletic Association First Team All-American in the past three years. He was preceded by Leon Ayers in 2020 and Carrington McCaskill in 2021.

“It’s a great list to be a part of,” said Manciel, of Sterling Heights.

"What makes him special is the person he is"

“I was honestly surprised,” he said. “It was a shaky start to the season for me. I sprained my right wrist during practice before the season began. When I recovered, I was playing catch-up for 2-3 months. Once things started rolling, we won a lot of games; I was producing and playing well. Being named an All-American really caught me off-guard. I was excited and happy.”

His fellow All-American, McCaskill, has served as a mentor to Manciel.

“He told me to play my game – ‘Play hard and everything you deserve will come to you.’ He’s like a big brother to me. He had a big part of getting me to come here and be comfortable at HFC,” recalled Manciel.

“Mak is as talented a student athlete as we have had at HFC,” said Coach Chris Shepard. “What makes him special is the person he is. He will be a huge success in anything he does.”

A 2021 alumnus of Stevenson High School in Sterling Heights, Manciel is attending HFC on a full-ride athletic scholarship and taking general studies courses. Although he is undecided about where he will transfer, he hopes to continue playing basketball with a goal of a professional playing career. When his playing days are over, he plans to go into sports management.

Manciel originally attended Detroit Country Day School in Beverly Hills for his first two years of high school. He transferred to Stevenson his junior year but was ineligible to play basketball. During his senior year, he played in six basketball games due to the coronavirus pandemic. It was a matter of quality over quantity, as colleges offered him scholarships.

“Honestly, I had a few offers I didn’t like. Coach Shep convinced me to come to HFC, saying it would be a good fit for me, and I’d be able to move to a 4-year school. I trusted him, and it ended up working out. HFC felt like the right place to be,” said Manciel. “He’s one of my favorite coaches I’ve ever had. He did a good job of keeping my confidence up throughout the season and helping me play the game the right way.”

A brotherhood more than a team

“It’s always great to see a student’s hard work on the court be recognized nationally,” said Taylor. “Mak is so deserving of this honor, and we look forward to following his success for many years to come.”

“It was a roller coaster. We had a shaky start, but the minute we came together as a team, we were probably the best team in the country. It was definitely a fun, enjoyable season. I loved my teammates. We were more than a team; it turned into a brotherhood more than anything else,” said Manciel. “This is one of the best teams I’ve played on, team-wise and skill-wise. These are people I’ll be connected with for a long time. I want to give a shout-out to all my teammates for playing a big role in this honor. They’re the reason I became an All-American.”