Notice: This article is more than one year old and is part of the Henry Ford College news archive. Information in the article may be outdated. For the most current news and information about Henry Ford College, please visit hfcc.edu/news, or contact communications@hfcc.edu.
Release Date:
Thursday, April 29, 2021 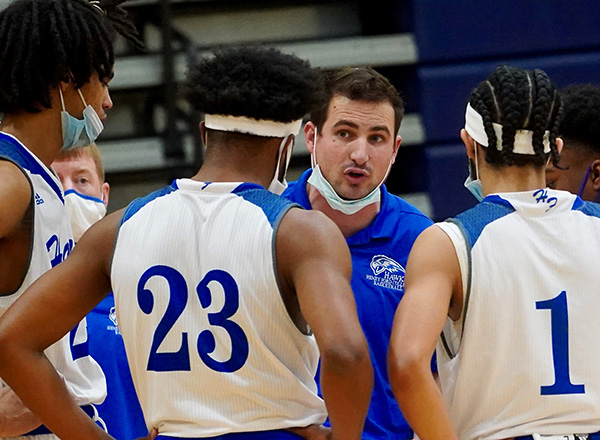 For the third year, Chris Shepard – the head coach of the HFC Men’s Basketball Team – has been named Coach of the Year by his peers in the Michigan Community College Athletic Association (MCCAA).

Under Shepard’s leadership, the basketball team had an outstanding season this year.

On the heels of winning the MCCAA Metro Conference and the NJCAA Great Lakes District C Championship, the 14th seeded Hawks defeated 3rd seed South Suburban College 67-58 in the opening round of the 2021 NJCAA Division II National Tournament on April 20 in what was the first big upset of the tournament. On April 22, the Hawks lost to Iowa Lakes Community College 88-74. On April 23, the Hawks played a close game against Mott Community College in Flint, losing 73-70 in the third-round game and concluding their run in the National Tournament.

“I am extremely proud of this group,” said Shepard. “They were regular season champions, district champions, and made it to the national championships. Their first-round victory marks the first victory at the men’s championships in the College’s history. These are records and memories that will last a lifetime.”

Prior to coming to HFC, Shepard was the assistant coach of the men’s basketball team at Macomb Community College (MCC) for three years. During his stint at MCC, the Monarchs advanced to the NJCAA National Basketball Championship for the first time in the history of the school.

His coaching career began as a graduate assistant at University of Michigan-Dearborn (UM-Dearborn) for one season. Next, he returned to his alma mater, Warren Mott High School, to coach the freshman boys and boys junior varsity basketball teams for four years. After that, he became head coach of the boys varsity basketball team at Warren Cousino High School, where he led the team to a district championship in 2013 for the first time in 33 years.

Shepard graduated from Warren Mott, where he played basketball, football, and ran Track. He went on to play basketball at UM-Dearborn. There, he was a 1,000-point scorer and named captain his senior year. He is married to Tara and they have a daughter named Riley.

“We are proud that Coach Shepard heads up our coaching staff,” said HFC Athletic Director Rochelle Taylor. “He not only attracts quality student-athletes to our program, but he motivates them to perform consistently at their best.”