Get to Know HFC: Delphine Davis brings compassion and mentoring to students 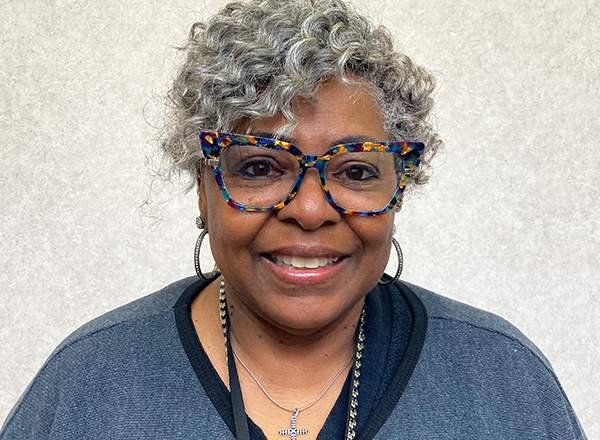 An elementary school fieldtrip to the Channel 7 studios where she met the late sports broadcaster/journalist Dave Diles was a life-changing experience for HFC Recruiter Delphine Davis.

“My class got the opportunity to tour the station. I was around 10 years old at the time,” recalled Davis, of Southfield. “It just stuck in my mind how exciting it must have been to be in that career. I wanted to be a journalist or go into public relations. After reading up on journalism and PR and people who held particular PR positions in the White House, that was the area I decided to go into.”

Surrounded by five generations of family

The eldest of five, Davis graduated from Chadsey High School in Detroit. She went on to earn her bachelor’s degree in public relations from Wayne State University and her master’s degree in leadership and management from Cornerstone University.

A widow, Davis has a daughter Kelli, three grandchildren, and three great-grandchildren. Kelli took classes at HFC, as well as her grandson, Lance, who is currently a student at HFC.

“In my family, we have five generations,” said Davis. “We’ve always had five generations during my lifetime. It’s such a joy to hold and play with the younger ones now.”

A long, fulfilling career at GM

Davis spent more than 30 years at General Motors. She began her career at GM when she was 19.

“Students are like starving artists. I didn’t like asking people for money,” she said, as she was looking for work as a young adult. “I heard that GM was hiring. Two days later, I had a job.”

Davis started in sales and marketing, working on forecast numbers for various car dealers. From there, she went into customer service. At that point, she resumed her education at Wayne State, which was paid for by GM.

“I’ve had a well-rounded career, starting with sales and marketing, then customer service,” said Davis. “From there, I went into finance, human resources, and PR. I organized major events such as auto shows. Corporate Communications was the last department I worked in before I left GM.”

Going from the ivory tower to a low-income community

After retiring from GM, Davis worked for the Salvation Army in Detroit for two years as a business administrator and supervisor.

“The Salvation Army was searching for new leadership. I received a call regarding a position from the HR director. I was informed they needed someone with strong leadership and organizational skills. At the interview, the Salvation Army Major asked if I could start that same day. I started two days later.”

By her own admission, it was quite a transition to go from GM to the Salvation Army.

“I went from the ivory tower that was GM to a lower-income community in Detroit,” said Davis. “The Salvation Army building was next to a closed apartment complex. Eventually, I was able to earn the trust of the community by providing food, including hot meals and groceries, as well as utility assistance. We worked together. I really had my hands full, but it was a good fill.”

She imagined being at HFC only for 3 months

Davis left the Salvation Army due to restructuring, joining HFC in 2014.

“Entech Staffing Solutions called me and told me there was a position open at HFC. I’ve never worked in education before, but I was willing to try. It would be something new, something different. I figured I would only be here for three months, and I’m still here 8 years later,” she said, laughing.

Davis’ duties include coordinating group tours for prospective HFC students and various other events. In this position, she reports to HFC Vice President of Marketing and Communications Rhonda DeLong.

"Delphine cares about students, first and foremost," said DeLong. "She enjoys not only recruiting and working with new students, but identifying and mentoring students who are part of the Recruiting team. She is very patient and understanding about the struggles students face, she supports them in so many ways, and she is proud of their achievements. I have personally seen and experienced her compassion. It's clear that her core passion is in helping students succeed."

Davis also teaches COLL 101: College Success as a part-time faculty member. In this position, she reports to Ibrahim Atallah. She is the recording secretary for the HFC Adjunct Faculty Organization, AFT Local 337.

"Delphine Davis is an invaluable asset to the AFO," said AFO President Dr. Lynn Boza. "She is an enthusiastic member of our team!"

Mama D: Going above and beyond for HFC students

“Mentoring students who perform the recruiting tours has been an awesome journey for me,” said Davis. “I encourage them to sharpen their presentation skills. They gain this experience by presenting to groups that come in for the tours.”

Davis is willing to go above and beyond for students. She spoke about one of her student employees whose parents died a year apart.

“This was a new situation for me. The student had lost her parents and had nowhere to go. She was not able to drive. I did not want to see her return to her native country. She needed grief counseling and many of the other support services we take for granted. With no place to go, she could have gone to a shelter, but I did not want to see that. As a Christian, I did not feel I could allow that to happen.”

Instead, Davis opened her home to this student. The student stayed at Davis’ home for three months until she made other plans. During that time, she learned how to drive and found a place of her own.

“Her road has not been easy,” Davis said. “Many of us have not endured what our students have. That’s what holds me close to HFC students.”

This student and Davis still keep in touch. “She calls me ‘Mama D,’ ” said Davis.

The students have kept her at HFC

“Delphine has a clear passion for helping students, and it comes through in how she approaches hosting groups on campus, mentoring student workers, and working with her teammates,” said Rouleau. “She brings expertise from her diverse professional background and a contagious energy to our team. I always appreciate any time I can just enjoy a fun conversation with her.”

Davis has a passion for helping students.

“I’ve worked with CEOs and stayed in fancy hotels. HFC has given me an opportunity to see what was really happening in a whole different way. I’ve been humbled by working in different industries like the Salvation Army. I supervised volunteers and learned a lot,” she said. “Working with students has become a passion for me to help them, encourage them, and let them know as long as they stay focused and if this is what they want, they can do it. That’s what’s kept me at HFC. Hearing from students who are doing extremely well puts tears in my eyes, knowing where they started.”