Notice: This article is more than one year old and is part of the Henry Ford College news archive. Information in the article may be outdated. For the most current news and information about Henry Ford College, please visit hfcc.edu/news, or contact communications@hfcc.edu.
Release Date:
Tuesday, August 18, 2020 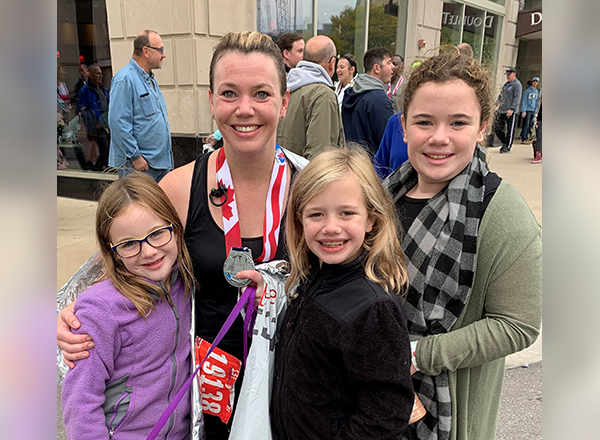 HFC admissions recruiter Kristine Rouleau is a veteran marathoner who was recently featured in the Detroit Free Press. She is pictured here after one of her races with her daughters.

Rouleau was surprised that a friend and fellow runner nominated her.

“I’m so flattered she thought of me,” said Rouleau, of Dearborn, an alumna of Edsel Ford High School (EFHS), Western Michigan University (WMU), and Walsh College.

Rouleau discovered running eight years ago after the birth of her twin daughters. She needed a mental and physical boost and found it too cumbersome to take her infant twins and toddler to the gym. So, running became a practical choice, and she committed herself to the sport.

“When I started out, I could barely last a block,” she said, laughing. “But I kept at it.”

And she hasn’t stopped, despite some obstacles and injuries.

Since then, Rouleau has run several half-marathons and marathons, most notably the Detroit Free Press Marathon. This fall, she will run in the half 2020 Detroit Free Press/TCF Bank Marathon, which will be virtual this year due to the coronavirus pandemic.

“I usually run between 15-20 miles a week,” said Rouleau. “Running has become an important part of my life. For me, it’s the ultimate stress-reliever.”