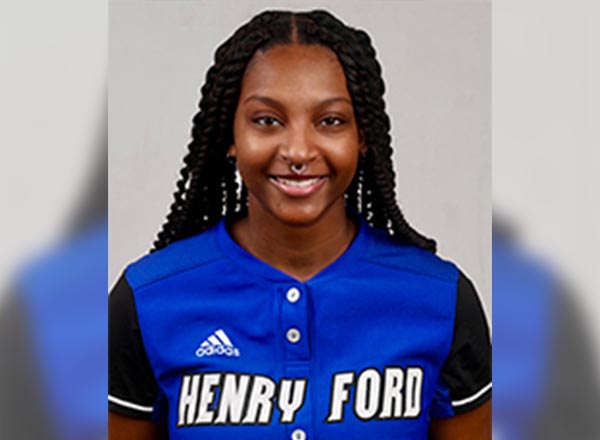 “I was often the only or one of very few African-American players on all the teams I’ve played on and tournaments I’ve been in,” said Jones, of Farmington Hills. “For me, to be the first African-American All-American from HFC is an incredible feeling.”

“It’s such an amazing feeling to be honored out of all the talented players in the United States. Everyone knew I had the potential to make it. Assistant Coach Charles Green, in particular, always told me that I had everything it took to become an All-American. I’m glad I was able to accomplish it,” said Jones.

The HFC Softball Team, under the leadership of Coach Steve Brown was the MCCAA Eastern Conference Champion this season. Brown was named MCCAA Softball Coach of the Year.

“Softball has always been my outlet”

The second of four children, Jones always excelled in sports. Besides softball, she has also played basketball and volleyball. However, softball, which she has played since she was 6, is her first love.

“I’ve always had a love for the game and just stuck with it,” said Jones. “Softball has always been my outlet, a place where I felt like I could be myself. I met some amazing people along the way.”

By her own admission, Jones has come a long way during her time at HFC – as both a Hawk and as a student. She didn’t always get the best grades, particularly in high school.

“During my time at HFC, Coach Brown made sure that I prioritized academics first and then softball,” she said. “I enjoyed playing for Coach Brown. Hands down, he’s one of my favorite coaches of all time. We had our ups and downs, but I know it was all out of love, and he for sure taught me a lot. We created an amazing bond over the years. He’s like a father to me. Coach Brown was named Coach of the Year and most definitely deserved it.”

Brown is proud of Jones' accomplishments on and off the field.

“Moya really come into her own as a student and as a player at HFC,” said Brown. “I’m proud of her. I had fun watching her play. She had an amazing season.”

Jones mentioned she could not have made it this far without the love and support of her mother, who is her No. 1 fan, as well as Brown, Green, and Brown’s cousin Jordan Venius. In fact, Venius informed Brown about Jones’ athletic ability.

“They gave me a chance when no one else would,” she said. “The HFC softball team has come up from the bottom. We went from losing nearly every game to becoming conference champs. I’m glad to say that I helped carry us to victory and put us back on the map. When people hear about HFC softball, they add more respect to our name now. We are no longer the losing team. We’re champions.”