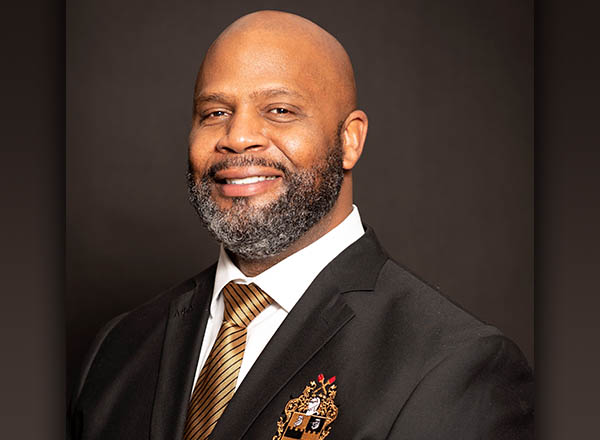 In his career, Dr. Jermaine Reese has been a semi-pro football player, a police officer, an ordained minister, and a college professor.

Effective the Fall 2021 semester, Reese has joined the faculty at HFC as a criminal justice professor. He is teaching CRJ 131: Introduction to Law Enforcement and Criminal Justice, as well as CRJ 132: Police Administration – Staff and Line Operations. Both classes are taught online.

Previously, he was a professor at Grand Rapids Community College.

“So far, my interactions at HFC have been positive. Everyone has been very helpful and inviting. The level of diversity here is huge. Even though Grand Rapids has a diverse population, the value of diversity is more appreciated and celebrated here, while it’s tolerated in other areas,” said Reese, who lives in Grand Rapids with Kimberly, his wife of 20 years. They are making plans to move to the Metro Detroit area.

Going from the gridiron to law enforcement

Born in Cleveland, Reese moved to Flint when he was 3. He played football for Flint Northwestern High School, where he graduated in 1990. He completed some coursework at Mott Community College in Flint and at Eastern Michigan University, where he played football.

After recovering from his injury during his EMU days, Reese played semi-professional football in Flint, which was coached by a Flint police officer named Harlon Green. Reese considered going from there into the Canadian Football League. However, Green told Reese that the Flint Police Department needed more police officers, hiring them from community policing grants through the Violent Crime Control and Law Enforcement Act of 1994 (a.k.a. the Clinton Crime Bill). He joined the FPD in 1996 after earning his associate degree and was a patrolman for two years. He then spent three years as an undercover officer in the narcotics unit.

Heeding the call to the ministry

Reese spoke about his desire to become a minister, which he felt helped him immensely as a police officer.

“I was active in the church. I became a minister out of a sense of service. Growing up in the church, I was ordained as a deacon. I heard the call to do more,” he explained.

People always asked Reese if becoming a minister was a conflict of interest, given his role as a police officer. To him, it wasn’t. If anything, it opened his eyes to true service.

“My involvement in the church exposed me to many different populations, especially people who have been incarcerated,” said Reese. “While most police departments forbid you to have interactions with known felons, you can in a church setting. This person may not be coming over for dinner, but you’re still interacting with them at church. It changed my perspective and worldview as it related to criminal justice. It helped spark my desire to learn more about the criminal justice system.”

As a school resource officer for Flint Northwestern, Reese contemplated changing careers and going into teaching, particularly at the K-12 level because there was a shortage of African-American men who are teachers. Law school was another possibility, but he decided against it, not wanting to continue to endure the stresses of the legal system.

Several former professors and mentors – including former Genesee County Prosecutor Arthur Busch – were teaching at the community college level. Reese realized that was the right fit for him.

“That was the initial catalyst,” explained Reese. “My role at church required me to teach Sunday school classes. I enjoyed being in that role. When I was up in front of the classroom, I never felt more alive. It gave me a sense of purpose and fulfillment. As I was completing my undergraduate degree, a couple of instructors began planting the seed that teaching might be a viable career option for me as well. Initially, I thought about K-12. But with a career in law enforcement, I wanted to be able to use my experiences in that field and translate that into teaching, hence the community college level. Quite a few of my instructors were previously in law enforcement. Seeing those individuals reinforced that career avenue.”

He resigned from GRCC earlier this year in order to come to HFC.

“I loved being in the classroom. Moving into this strict administrative role at GRCC really limited my time to teach. The desire to teach never left me. I saw the opportunity to teach full-time at HFC and applied for that position. I’m excited to be back in the classroom. Even though I learned a great deal from being in administration, those skills I learned there will help me be more effective in the classroom. I still have an impact in shaping and molding the minds of future criminal justice practitioners than in my role as an administrator.”

Looking forward to a rewarding tenure at HFC

At HFC, Reese reports to Associate Dean of the HFC School of Liberal Arts Robert Yahrmatter.

“Jermaine is a wonderful new addition to Henry Ford College,” said Yahrmatter. “His background running the Police and Corrections Academies at GRCC brings a new level of opportunity to the College. I look forward to working with Jermaine and Mike Petri, our other new CJ hire, to expand and enhance our Criminal Justice program.“

Reese is looking forward to getting settled at HFC.

“I’m looking forward to more growth as an instructor,” he said. “I have much to learn from my students as they do from me. I’m hoping to make new partnerships and friendships here at the College.”