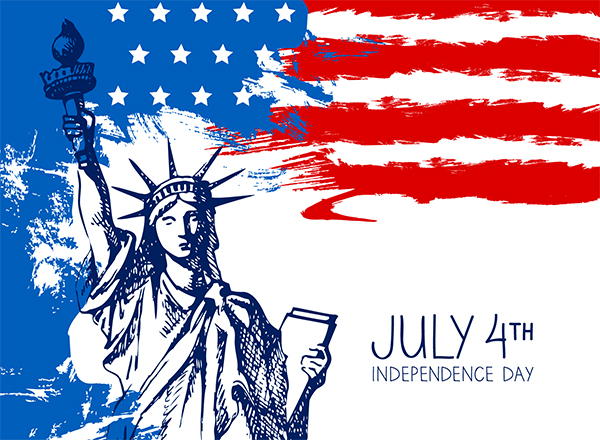 On Saturday, July 4, we will celebrate the federal holiday of Independence Day. Most public organizations and schools, including Henry Ford College, encourage employees and students to celebrate this as a day away from work activities. Because July 4 falls on a Saturday this year, the College will be closed Friday, July 3 and Monday, July 6.

What is Independence Day?

Until July 1776, the 13 American Colonies had been a part of the British Empire. Today, these are the states of Connecticut, Delaware, Georgia, Maryland, Massachusetts, New Hampshire, New Jersey, New York, North Carolina, Pennsylvania, Rhode Island, South Carolina, and Virginia.

The Declaration of Independence is a written message by American colonists that the Colonies considered themselves a sovereign collection of states (not yet a nation as we know it today) and that each state was fully independent and free from any allegiance to Great Britain. The English did not accept this, and the Revolutionary War ensued. It took seven more years to achieve independence and U.S. sovereignty.

Last year, I wrote in more detail about Independence Day. I encourage you to read it, and to learn more about our nation’s heritage, including the reasons our history is not unified. Some of these reasons include our nation’s treatment of indigenous people and people of African heritage who were brought to this country to be enslaved. Many Americans also see the holiday of Juneteenth to be an Independence Day, either apart from July 4th or in addition to it.

I encourage you to welcome the notion that Americans have diverse views of July 4th. The idea of declaring our independence nearly 250 years ago was to start a nation where the people themselves decided their relationship with their government—rather than a King dictating how citizens should feel and act. Our country is better because of our various views about who we should be as a country. It is that public debate about our shared future—the vivid competition of ideas—that has given our country the strength and flexibility to remain a nation.

We have a proud tradition of acknowledging that together we are always pursuing the Declaration’s goal of building a country where “all men are created equal, that they are endowed by their Creator with certain unalienable Rights, that among these are Life, Liberty, and the pursuit of Happiness.” To be true to this aspiration, we must celebrate our success as being one of the longest-standing democratic republics on the planet, while simultaneously acknowledging our past failures and how we will work together to improve as a people. Since July 4, 1776, our country has been at its best when we openly discuss our diverse views, while working together to improve our shared future.

Independence Day is normally a day of public celebrations and commemorations across the country, with significant emphasis on the recognition and meaning of the nation’s freedom. This year, most parades, public gatherings, and public fireworks displays have been canceled due to the pandemic. The Detroit Fireworks, one of the largest fireworks displays in North America in conjunction with Canada Day, has been moved to a TV-only event on August 31.

At Henry Ford College, we are working hard, even during the pandemic, to make our community a place that is richly diverse, welcoming, and an inspirational example of the best that we can become.

Happy Independence Day to all of you! Enjoy the long weekend and a safe celebration of freedom with those closest to you.