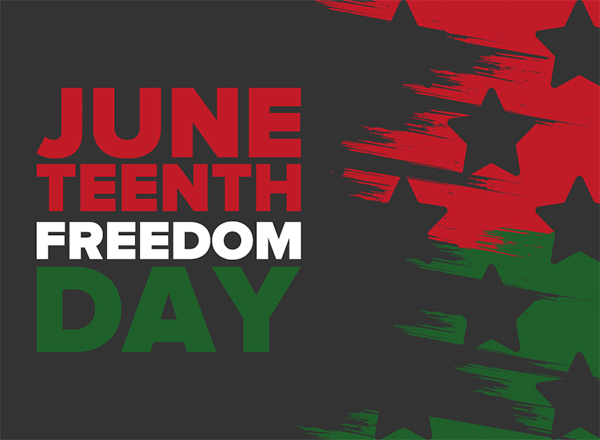 June 19, or Juneteenth, is the oldest-known celebration commemorating the abolition of slavery in the United States. Thus, Juneteenth is considered the Independence Day for those who were enslaved in this country. It is an important day for all Americans because it commemorates the date when it became illegal in the United States to own another human being.* This legal recognition of individual rights for all people is important to all of us as a turning point away from the inhumane and unjust practice of slavery.

At the time of abolition, the vast majority of enslaved people in America were of African ancestry. I have asked for, and received, differing views about the correct terminology for them and their descendants. Some prefer the words African Americans, some prefer Black Americans, and others prefer simply Americans. I use all three terms in this piece.

This year, the holiday feels more poignant. Independence, freedom, and justice are not equal in our society, and never have been. Recent killings of Black Americans have elevated the national conversation about racial discrimination and violence. These events have amplified, once again, the reality that racism and discrimination against Blacks remain entrenched social and structural problems in America.

At HFC, our Black students, colleagues, and friends will tell you this reality permeates their daily lives. I heard more about this at a social justice town hall I hosted last week. I am committed to working toward progress in our society by eliminating racist incidents, structures, processes, and behaviors. Everyone deserves a welcoming environment free from racial discrimination. Our College mission and values call for us to do all we can to create and sustain such a society.

Juneteenth originated on June 19, 1865, when U.S. Army General Gordon Granger landed in Galveston, Texas, where he proclaimed General Order #3, stating that “all slaves are free,” and that “this involves an absolute equality of personal rights and rights of property between former masters and slaves.”

From this date, June 19 became a day of celebration to honor Black Americans and the end of the enslavement of any person, which related nearly exclusively to Africans in the United States.

But the story is more complex than that. Last year, I wrote about this holiday and its history in some detail, and I encourage you to read that story.

The most important way to honor this date is to stand together as a community against all forms of racial discrimination, intolerance, and hatred, and to show respect and honor to everyone, especially those who are different from you. This year, there will be marches and gatherings both to protest racial injustice and to celebrate this holiday. I encourage you to participate in this holiday. Some may join marches (please wear a mask, try to social distance, use hand sanitizer, and do not participate if you are not feeling well). Some will communicate the importance of this day to others. No matter your preference for commemorating this day, I encourage you to think about and act in some way on the idea that our common humanity is the strength that allows our wonderful diversity to flourish. You will see this if you share conversations about your cultural and family experiences, which will advance our community in becoming a model of openness, safety, and welcome to all.

Our Henry Ford College mission states, in part: “We empower learners through the development of independent, critical and creative thinking, and we foster diversity, inclusion, understanding, and acceptance to prepare learners to succeed in a global society.” I urge you to do all you can to adopt and spread our College values and mission, whether you are on or off campus.

Above all else, please take this time to remember that we are stronger and better, as a people, when we unite around our common humanity, and when we reject ideas that use our diversity to divide us through fear and misinformation.

*For purposes of historical accuracy, it is important to note that slavery did not officially end across the entire United States, including the formerly Union states, until the 13th Amendment to the U.S. Constitution was ratified in December 1865.