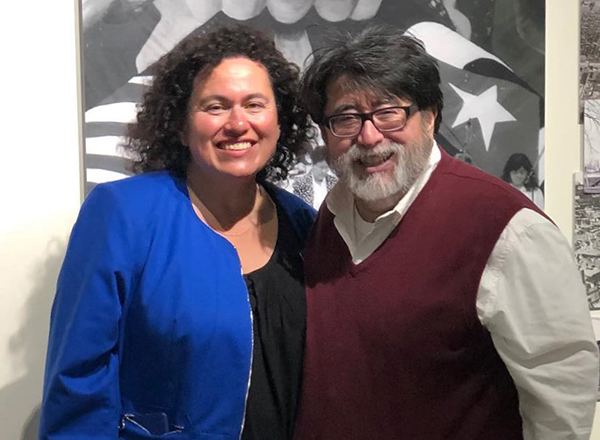 The Henry Ford College (HFC) Foundation was approached by Maureen Sheahan to establish a scholarship as a tribute to her dear friend Monica Echeverri Casarez. Casarez was an HFC alumna and an instructor in the HFC Surgical Technologist program who passed away from complications due to the coronavirus on April 12, 2020.

Maureen worked with her husband, Al Cholger, and Monica’s husband, Jorge Casarez, to develop the scholarship with the HFC Foundation. The Monica Echeverri Casarez Scholarship is now permanently endowed to provide a scholarship annually for young women who:

“Monica’s unwavering dedication to community service, political activism, the healthcare field, and how much she cared about her students at Henry Ford College is deeply missed,” said A. Reginald Best, HFC Vice President of Advancement and Government Relations. “I can think of no finer tribute to honor Monica Echeverri Casarez than to name this scholarship after her, which will benefit future students seeking an education.”

“I feel this scholarship honors who Monica was and what was important to her,” said Maureen, who knew Monica for more than 30 years, and they were the best of friends.

The two first met after Monica had graduated from Canton High School. They were both organizing and participating in peaceful protests that opposed United States policies impacting El Salvador and Nicaragua. This experience was the beginning of their friendship and the start of years of shared social justice activism.

“We felt like we had found our soulmates when we met. We were both hyper-organized people who brought that eye for detail and discipline. Both of us were hardworking, and we thought we were effective. It was such a joy to be able to do things with somebody who would always do the things that she said would, do them on time, and do them really, really well. She was amazing that way,” Maureen fondly recalled.

Those who knew Monica wouldn’t be surprised. She had a reputation of going above and beyond the call of duty – and then some. These phenomenal qualities led her to become the staff person for the Detroit Labor Committee on Central America in the late 1980s. Monica continued her activism and community service over the next three decades.

In fact, her activism and service were noted in articles that paid homage to her in The Detroit News and the online media outlet called Latino. HFC President Russell Kavalhuna honored Monica during the April 22 Board of Trustees meeting.

Becoming a Surgical Technologist – the joy of learning

Roughly a decade later, after her start at Southwest Solutions, Monica would enroll in the Surgical Technology program at HFC, earning her associate degree in surgical technology in 2006. One of her classmates was Keambra Pierson, the Associate Dean of the HFC School of Business, Entrepreneurship, and Professional Development (BEPD). The two became close friends. They worked together, supporting and encouraging each other for many years.

“Monica was always interested in elevating the surgical technology profession,” said Keambra. “She invested in our students by sharing her experiences and knowledge. She was passionate about charity and hope. This scholarship is a great way to represent her contributions to the healthcare field and education.”

Returning to the trenches – duty to others and the common good

Monica worked full-time as a surgical technologist for about six years and then decided to branch out. While continuing to work at least two surgical shifts a month to maintain her skills and knowledge, Monica first returned to Southwest Solutions and then became a business coach and consultant.

Monica founded her own company, Blue Order, LLC to facilitate innovative ways of supporting the community. She helped minority entrepreneurs in Detroit and Wayne County develop their own small businesses with classes in English and Spanish, while teaching at HFC. She supported arts and community organizations.

Monica also co-founded Southwest Detroit Restaurant Week to encourage people in southeast Michigan to support small restaurants representing the diversity of the Latin American community. She also used her bilingual skills to work as a Spanish interpreter, primarily in the healthcare field.

When the coronavirus pandemic erupted in March, if forever changed our way of life. Despite her reservations, Monica chose to be on the front lines.

She posted this on her Facebook page on March 21: “My first shifts back at the hospital (since all this COVID-19 began) are tomorrow and Monday. That crazy place has offered me some of the richest experiences, friendships with top quality people, and tons of true belly laughs, but I'd be lying if I said I wasn't a bit nervous to be there now.”

Knowing the risks, Monica believed that working in the hospital would save lives. Less than a week later, she was diagnosed with COVID-19 and hospitalized. She was on a ventilator for a week before she passed away on April 12. Monica is survived by Jorge, her beloved husband of eight years, who also contracted COVID-19.

“After Monica died, a friend asked how I was doing. I told her, ‘I’m grieving and really, really sad,” said Maureen. “That’s the right way to be when you lose somebody you love so much. I’m reminded of a quote by the author James Baldwin: ‘Trust life, and it will teach you, in joy and sorrow, all you need to know.’”

“I’m certain she’d want to be remembered this way”

According to Maureen, it was her husband’s idea to start a scholarship in Monica’s name.

“Al and I always imagined we’d split our estate between Monica, my daughter, and his two sons,” she said. “Since she’s gone, we would like to give funds to start this scholarship. I’m certain she’d appreciate it and would like being remembered this way.”

Jorge is profoundly moved by the establishment of the scholarship.

“As with so many, there is a time to mourn and a time to honor a friend,” he said. “To have my beloved wife honored by the creation of the scholarship is an act of generosity and love. This gift is deeply appreciated. Monica’s character was energetic, intelligent, creative, organized, helpful, and genuine – and always effective. Her unique character was founded in hope, practicality, and adventure. I loved her so much, as I loved her generosity and fearlessness. There are real and unique reasons she was loved by so many. I hope that many will follow in her path.”

He added: “Monica’s pride in her heritage broadened her worldview and her reverence for the cultures of others. The scholarship’s emphasis on ‘working on behalf of their communities’ is to reflect the positive values and the activism of Monica, as well as to support the leadership qualities of the conscientious members of society seeking higher education. Monica’s intelligence found joy in art, science, and organization. Her heart found joy in love toward others, life, and the world. These two would combine and were evident in her ability to work multiple jobs in diverse fields, her ability to solve problems, and being responsible to the world.”

To contribute to the Monica Echeverri Casarez Scholarship, please go to the HFC Foundation website. While the fund is endowed to a minimum of $10,000, the higher the endowment, the larger the scholarships that will be available each year for students.