Notice: This article is more than one year old and is part of the Henry Ford College news archive. Information in the article may be outdated. For the most current news and information about Henry Ford College, please visit hfcc.edu/news, or contact communications@hfcc.edu.
Release Date:
Sunday, September 27, 2020 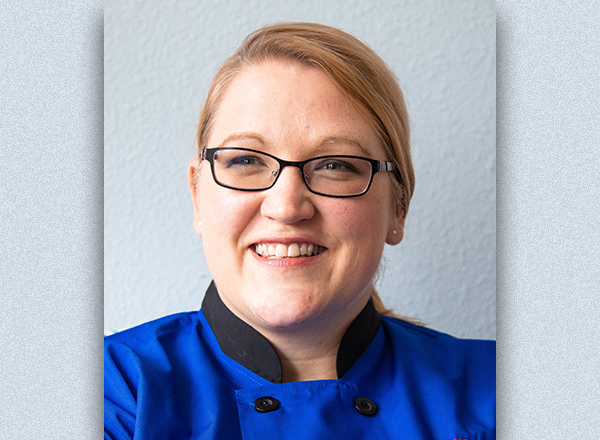 “On the first day of class, Chef Konarski assigned us homework about chicken stock and chocolate chip cookies. I had an epiphany that went something like this – ‘They’re giving me school credits to read about soup and cookies. Someday, someone is going to pay me to make soup and cookies! I don’t know if that’s a real job, because it’s too much fun to actually get paid for, so I’m going to be a chef!’” said Macan, who lives in Chesapeake, VA with her husband and son.

Macan – who was recently profiled in CoVaBIZ: The Business Magazine of Coastal Virginia – is Director of Community Kitchens and Programs for Mercy Chefs, a Virginia-based non-profit disaster relief organization that serves professionally prepared meals to victims, volunteers, and first responders during national emergencies and natural disasters. She has been at Mercy Chefs for eight years, the last two in her current position.

Attending HFC with her brother

An alumna of Fordson High School, Macan studied alongside her younger brother Dr. Michael Gozdzialski in the Culinary Arts program at HFC.

“It was so fun going to school with him. They called us twins because we are very close in age,” said Macan, laughing. “I went to HFC because it was an affordable option for college and I wasn't sure what I wanted to do. My mom was an employee of Dearborn Public Schools, so my brother and I had free tuition. I was an English major at first before I took a semester off and then went back to study Culinary Arts with my brother. I don't think I would've had that much freedom to change paths if I was in a different kind of school.”

“I also loved to eat, and I thought that six months of cooking school would give me some skills to feed myself better,” she said. “There were lots of programs at HFC, and they were all accessible. I felt if I was interested in exploring something, I could. I also liked that there were small class sizes, so you could really get to know your teachers and get the most out of your education.”

Macan loved every moment of being in the Culinary Arts program. Her main instructors were Konarski and now-retired Chef Richard Teeple. She still has her notes from her wine class and her pastry class. In fact, she still uses the techniques for creaming in cake batters that she learned in the pastry class.

The one memory that stands out

“During the practicum, we had to create a menu with a team and then cook it for evaluation. Our team was my brother Mike, Jeff Aquilina, and me. Jeff really wanted to do the entree, so my brother and I did the other courses. It was a five-course meal and we worked really hard to pull it off. We put cream of callaloo soup on the menu, but couldn't find callaloo, so we substituted spinach and didn't admit it – (sorry, Chef; we wouldn't do it again!). Also, Jeff messed up the spice calculations, so the blackened scallops on the entree were inedible because he put a ¼ cup of cayenne pepper in four portions. My brother and I still tell stories about that day,” she recalled, laughing.

Getting into the world-class Culinary Institute of America

Teeple was Macan’s mentor. As a member of the Detroit chapter of the American Culinary Federation, Teeple took her to meetings to help her network. He also introduced her to HFC alumnus Chef Ali Majed, who gave Macan her first cooking job at The Henry Ford in Dearborn. Majed encouraged her to attend the renowned Culinary Institute of America – just like he had.

“Chef Majed was really influential. He encouraged me to go to the CIA because it would open so many doors for my career. I applied to the school, got accepted, and then applied for a scholarship. If I got the scholarship, I felt it would be a sign that I should go there.”

Macan earned the “Cream of the Crop” scholarship, a half-tuition scholarship paid in full.

“I got that $20,000 scholarship and would go on to get more than half of my tuition in scholarships and grants. I can say I was very far ahead of my peers in school because of the time I had spent at HFC. I felt that I could really get good at the skills I was learning at CIA because I had a solid foundation,” said Macan, who earned an associate degree in culinary arts and a bachelor’s degree in culinary arts management – both from the CIA.

A seasoned veteran of the restaurant industry

For nearly 25 years, Macan has been in the restaurant industry. Starting at age 15, she worked as a server before moving to the kitchen, where she’s been ever since.

Some of the highlights of Macan’s career include:

Before her current position at Mercy Chefs, Macan was on the culinary arts faculty for five years at the Culinary Institute of Virginia.

She spoke about working for Mercy Chefs.

“I was hired to make that dream a reality,” she said. “Our goal is to help organizations use food as a tool for good in our community. We are also teaching classes to empower people with cooking skills and job skills. I would have never left teaching if it wasn’t for the specific job that I am doing now.”