Family commitment: Dean’s sons on the frontlines during the pandemic 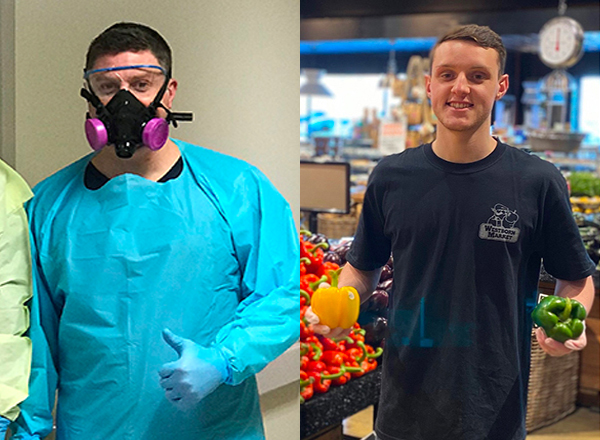 Like most mothers, Dr. Susan Shunkwiler, Dean of the HFC School of Health and Human Services (HHS), is proud of her children. These days, that pride has taken on new meaning. Two of her sons, David and Christopher, are on the frontlines, helping people through the COVID-19 pandemic in different ways. Both have taken risks to directly improve people's lives.

Dean Shunkwiler says the values leading to their choices were "ingrained in all my children from an early age. Their father and I are both nurses, so our kids know this is what you do: you serve other people."

Unlike his parents and older brother David, Christopher, the youngest of Shunkwiler’s four children, did not follow the family tradition of becoming a nurse.

“I’ve never been in that mindset. I’ve had more of a business mindset than anything else,” said Christopher, of Dearborn.

An alumnus of Dearborn High School and a student in HFC’s Architecture/Construction Technology (ACT) program, Christopher works as a produce associate at Westborn Market in Dearborn. Christopher has volunteered to work up to seven days a week to fill shifts left vacant by people who are unable to work during the pandemic and those who are at higher risk.

“We have strict guidelines that if you’re in contact with people who have or may have coronavirus, you can’t work here. We have to eliminate the spread and flatten the curve,” said Christopher.

His duties include making sure the produce is clean and well stocked. As is the common practice now, he wears a mask and gloves, in addition to an apron. He also maintains a social distance of six feet from coworkers and store patrons.

“It was strange at first, wearing the mask and the gloves. People were scared they’d get the disease,” said Christopher. “It’s been a lot busier because the only place people can really shop is the grocery store. People have been nice. They usually ask, ‘Hey, can I grab this?’ I’ll move out of their way and give them their six feet. For the most part, people have been polite, which makes these long shifts easier.”

For nine of his 11 years as a nurse, Dean Shunkwiler's eldest son, David, has worked at the main campus of Henry Ford Hospital (HFH) in Detroit, where he’s in the ICU. He has also taught classes in HFC’s Nursing program for the past five years.

“I was inspired by my parents to become a nurse,” said David, of Dearborn. “Seeing how hard they work and the compassion they have for others is special to me. Nursing also afforded me job security and the ability to choose from a wide range of career options. Having the ability to do so much with a nursing degree was a big factor in my decision.”

Like most people, he never expected to be on the frontlines of a pandemic. Pandemics were source material for action-adventure movies like 1995’s Outbreak and 2011’s Contagion.

“Living though an actual pandemic has been eye-opening, especially being on the frontlines,” said David. “I still can’t fathom how much it has affected every facet of our lives. The fact that the whole country has, for the most part, shut down is pretty mind-boggling. Seeing firsthand as a nurse how this virus affects people and their families is something that will be with me forever. We are living in a historic period. My grandchildren will all hear about this.”

“Too many of them die alone”

With the early reports of the virus, David says nobody really expected COVID-19 to turn into a full-fledged pandemic. Some preparations were made, but it wasn’t being treated as a global crisis. Once the cases started pouring in at HFH, reality hit everyone hard.

“I remember getting a voicemail on a Friday telling me I had to come in that evening to get fitted for new masks, or I risked not having one for my shift the next morning,” he said. “That was when I knew things were going to be different. The situation was escalating rapidly. It has been controlled chaos since that night, which was almost two months ago.”

One of the hardest parts of working the frontlines is all the additional effort that goes into caring for patients now. Donning and doffing the personal protection equipment (PPE) nurses are required to wear is at least a 10-minute process. And that's just the start.

“Being stuck in a steamy gown and face mask for extended periods of time leaves us with red marks and breakdown on our faces, and scrubs that are sweat-soaked. It’s taking a toll on everyone. I can’t complain though, because the patients are suffering the most. They are isolated in rooms with none of their support systems around them. I have seen too many of them die alone, with no one to hold their hand. It is incredibly sad. Not having the people you love around you when you are going through something traumatic like this is terrible for these patients and their families,” he said.

Despite the hardships in the ongoing battle against the pandemic, David has been touched by the support of friends, family, the community, and many people from all over the nation and the world. This has included people providing food, and some even decorating his house to express their thanks.

“The outpouring of support has been incredible!” he said. “People from all walks of life have stepped up to help us nurses, and it has truly been special. We have been fed almost daily since the pandemic broke out, and I have received countless texts, calls, and emails from friends and family seeing if I’m okay and wishing me well. That has really kept me going.”

As a mom, Dean Shunkwiler confesses to a bit of worry about both sons. But, the pride and generosity outweigh the worry. "David is facing the risks of nursing with clear eyes. He has no regrets, and tells us, 'Don't feel sorry for me.' Chris says, 'People need food, and this is how I'm going to help.' What they are both doing is really worthwhile."