“All Gave Some, Some Gave All”: HFC SVA honors PFC Christopher Sroka 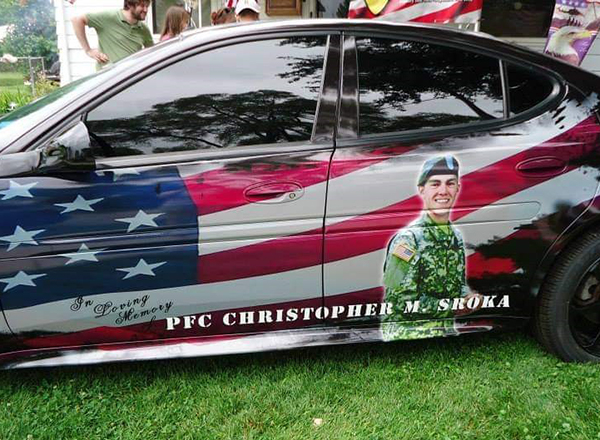 As a tribute to his son, the late PFC Christopher Sroka, Mark Sroka restored his son's 2004 Grand Prix GTP. The car is decked out with images of various aspects of Christopher's life.

For many, their car is a prized possession. For Mark Sroka, his 2004 Grand Prix GTP is much more than that.

It is a homage to his son, the late U.S. Army Private First Class (PFC) Christopher Sroka, who was part of Company B, 115th BSB, 1st BCT, 1st Cavalry Division, stationed at Fort Hood, TX.

“This car originally belonged to my son,” said Mark.

A labor of love and honor

Alongside Christopher’s friends, Mark restored the Grand Prix when he was ready. The majority of the parts were donated. He worked with Graphik Concepts in Farmington Hills to design a wrap – a digitally printed vinyl covering – transforming the car in honor of Christopher.

The driver’s side of the Grand Prix is dedicated to Christopher’s time in the Army. It includes a photo of him in uniform against a background of stars and stripes and the words "In Loving Memory." The passenger side represents Christopher’s civilian life, with an image of him wearing his soccer gear, accompanied by the words “Loving Son and Brother.”

The hood is emblazoned with artwork depicting a rifle sticking in the ground with a helmet on its stock and dog tags hanging from the magazine, next to a pair of combat boots – symbolically called a “battlefield cross” – along with an eagle, an American flag, and the phrase, “Home of the Free, Because of the Brave.” On the rear windshield, the saying “One Day at a Time,” which Christopher had tattooed on his chest, is inscribed, with a graphic of military dog tags hanging from the text. The phrase, “All Gave Some, Some Gave All,” is inscribed on the rear bumper.

“My family was so overwhelmed when we saw this for the first time,” said Mark. “It means so much.”

HFC joins the tribute to a fallen soldier

HFC student Nina Denny served in the United States Air Force (USAF) for 13 years and is the president of HFC’s Student Veterans Association (SVA). She first met Mark on the anniversary of Christopher’s death at the Flower Peddler in Clinton Township near Resurrection Cemetery, where Christopher is interred. Mark was driving the customized Grand Prix, which caught Denny’s attention.

“We started talking about the car and what it meant for him and his son. They were supposed to rebuild this car together after he returned from his deployment. Instead, he rebuilt Chris’ car as ‘their’ project. He has made it his mission to take the Grand Prix to car shows and events (including the Woodward Dream Cruise), where he shows it off to represent his son and his memory.”

Denny was touched by this and suggested for the College’s Veterans Day Commemoration that HFC shares his story and creates a video. Gail Bock of the HFC Office of Veterans Services was happy to support the project.

“Working with HFC SVA advisor Bob James and Student Activities Officer Cassandra Fluker, we supported Nina 100% on this endeavor. She shared the story of her chance encounter with Mr. Sroka, and the idea to commemorate fallen warriors took the lead. It is a great way to pay tribute to one of our fallen on Veterans Day,” said Bock.

Born in Warren, Christopher was an alumnus of Fitzgerald High School. He was in the Army for nearly a year, stationed at Fort Hood as a vehicle mechanic. He died in an apartment fire on Sept. 14, 2012, the day before he was supposed to be deployed overseas. He was 21. Christopher was survived by his father, his mother Theresa, and sisters Lauren and Samantha.

“By all accounts, he was a soldier’s soldier,” said Lt. Col. J. Bradley Swift, commander of Brigade’s 115th Brigade Support Battalion. “This means despite his young age, he conducted himself in the tradition of soldiers from decades past. He was respectful, reserved, and humble, completely devoid of selfishness.”

Since Christopher set such a sterling example for his fellow soldiers, the company conference room he helped design has been named the PFC Christopher Sroka Memorial Conference Room.

“I can’t put into words how much this means to me and to my family,” said Mark. “I’m very proud of my son. I always will be.”