Two performances in one: “5AM Pancakes” and “Tenderly” 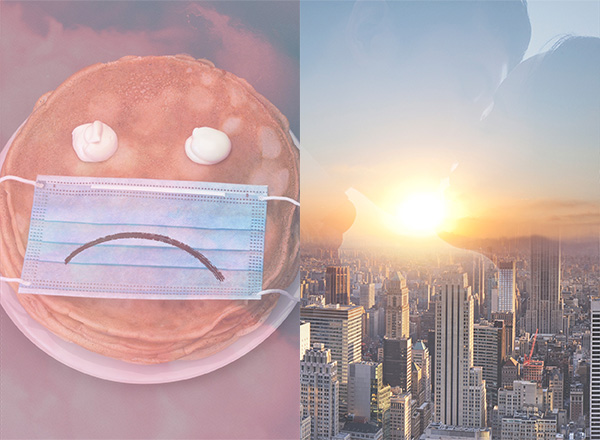 The HFC Theatre Arts department will present two plays back-to-back – 5AM Pancakes and Tenderly – in the Studio Theatre (Rm. F-161) in the MacKenzie Fine Arts Center (Bldg. F) on the main campus.

The performance dates and times will be:

5AM Pancakes is a 10-minute play that will be immediately followed by Tenderly, which runs a little more than one hour. There will be no formal intermission, says HFC Director of Theatre Dr. John Michael Sefel. The total performance time should be around 90 minutes.

“Both 5AM Pancakes and Tenderly are new plays making their Michigan debuts,” said Sefel.

Written by Alexa Juanita Jordan and directed by HFC instructor Christopher Bremer, an award-winning director, 5AM Pancakes is about two young women named Lia and Claire, lifelong friends, arguing over breakfast about how to write the obituary of their friend Rachel, who died from COVID. This short performance is about grief, enduring friendships, and forgiveness.

“The play is long enough to make a bagel, which is what we do onstage,” said Bremer. “It’s a lovely little story that gives the actors the opportunity to do some scene work that they don’t always get to do when performing.”

5AM Pancakes occurs in Lia’s New York City apartment. She is a writer, while Claire is a nurse from the Midwest who has flown in for Rachel’s funeral. They don’t see eye-to-eye on what to say in Rachel’s obituary. Claire thinks Lia makes it sound like an online dating profile. Find out what happens by the end of their breakfast together.

“The play conveys a sense of loss and a sense of regret about the things you didn’t get to say to a loved one,” said Bremer. “Everyone knows someone who has lost a person close to them during the pandemic. 5AM Pancakes shows how fragile life is and how there are no guarantees. Tomorrow is not promised.”

“Lia is like an extension of me – she’s bubbly and adventurous. I don't think I would be so insensitive when writing my friend’s obit. Still, it feels good to play her – it’s like playing myself with an extra perk,” said Jamal, of Detroit.

Duckett agreed with Jamal in the assessment of Lia.

“She’s bubbly. I can see myself in her. Reading the script, she doesn’t take things seriously – at least in the eyes of others – but she does,” said Duckett. “I didn’t intend to audition; I just came to show my support for the theatre club. I decided to audition, and got the part. This play has really gotten me out of my comfort zone and allowed me to find out what I can do.”

Written by Ida Esmaeili and directed by Sefel, Tenderly is a captivating play about falling in love as two college students, Alina and Will, meet and begin a whirlwind romance. What at first feels like a standard rom-com runs into complications as Alina’s status as an Iranian on a student visa runs afoul of U.S. politics. This puts their future as a couple in doubt.

“It’s not like they can move to Iran, given its political climate,” said Sefel. “They have to deal with the tension of all the governments involved, which really weighs on them as a couple.”

The reason Sefel chose to direct Tenderly is because he wanted to diversify the base of playwrights whose works would be adapted at the College based on demographics and age.

“I want to see our seasons reflect the community we serve," said Sefel. "In the case of 5AM Pancakes, Alexa Juanita Jordan has written about how she specifically wanted to emphasize the additional and often-overlooked burdens faced by the African-American community throughout the COVID pandemic. Meanwhile, Tenderly focuses on issues faced by so many immigrants in the Arab community and beyond. Ida Esmaeili, an Iranian-American herself, writes with a voice of experience that I hope will ring true for our audience. Both shows address difficult subjects with such love and care that they really feel like a calming, positive love letter to all of us dealing with difficult times."

In Tenderly, Safa Alamiri, a dual-enrolled student at HFC and the Universal Learning Academy in Westland, portrays Alina. Dylan Buzimkic, a psychology major at HFC, portrays Will.

“It’s a pretty good sign when the actors and the director are tearing up during the initial read-through,” said Sefel.

Ticket prices for both plays:

While tickets can be purchased at the door, Sefel recommends purchasing them in advance. Purchase tickets here

For questions or more information, contact Sefel at jsefel@hfcc.edu.