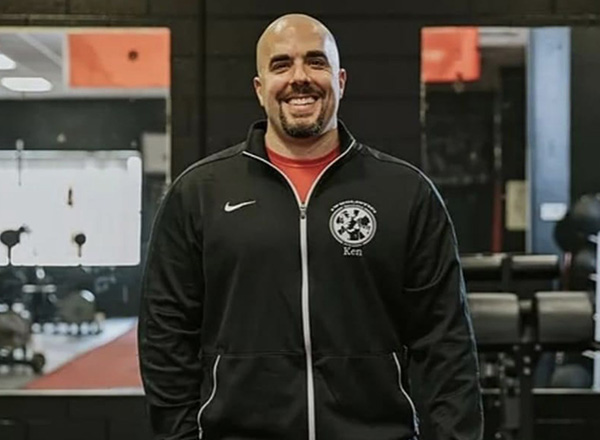 The Wrestling team has a new addition to its ranks: Strength and conditioning coach Kenneth Poucket (pronounced “Po-kette”).

“I’m really enjoying myself. This is a fantastic opportunity,” said Poucket, of Rockwood, where he lives with Jennifer, his wife of 15 years, and their three sons.

An alumnus of Southgate Anderson High School, where he ran track and cross-country, Poucket took some EMT classes at HFC (then called Henry Ford Community College). He is a performance enhancement specialist through the National Academy of Sports Medicine and has taken courses in holistic coaching through the CHEK Institute in San Diego, CA.

For the past nine years, Poucket has served as the founder and president – or “head revolutionary,” in his own words – of The Wholistic Revolution in Wyandotte, which is a clinic that specializes in:

“I am a holistic corrective exercise and performance enhancement coach who has been providing people with cutting edge evidence-based solutions for restoring their vitality for the past 19 years,” said Poucket.

That includes HFC wrestling coach Grant MacKenzie. The two met through The Wholistic Revolution, where MacKenzie was a client three years ago.

“I was working with Grant and he was picking my brain one day about his athletes. We were talking about programming and set up a training program for his wrestlers. He asked, ‘Why don’t you set up all the training for me and we’ll go from there?’ That’s how it started,” said Poucket.

Impressed by the professionalism of HFC

He has spoken about assisting MacKenzie this season.

“To me, ‘holistic’ means the whole person. In this case, it’s viewed through the lens of wrestling,” said Poucket. “I enjoy being able to make a difference in these students’ lives. I remember being 20 once and wanting to be the best at what I was doing. I had great mentors – I call them ‘wise elders’ – who helped me. I relish any opportunity to impart some wisdom to these students that helps them in any way.”

MacKenzie said the athletes have benefited from Poucket’s expertise.

“Ken is a fantastic trainer who has helped me personally over the past couple years,” said MacKenzie. “I knew he would enjoy working with the HFC Wrestling team. The wrestlers are responding well to his training principles.”

Poucket has enjoyed working with the Wrestling team and HFC in general.

“They’re a great bunch of guys and the hardest-working athletes I’ve ever seen. They’re also the most polite. They’re a pleasure to be around,” he said. “I’m having a blast. They’re having a blast. This has been a phenomenal opportunity, working one-on-one with these athletes. This is the first team I’ve worked with that’s been super professional. Grant’s been super professional. I can’t say enough about the professionalism of everyone I’ve met at HFC – from the office staff to Grant himself. It’s been very enjoyable.”