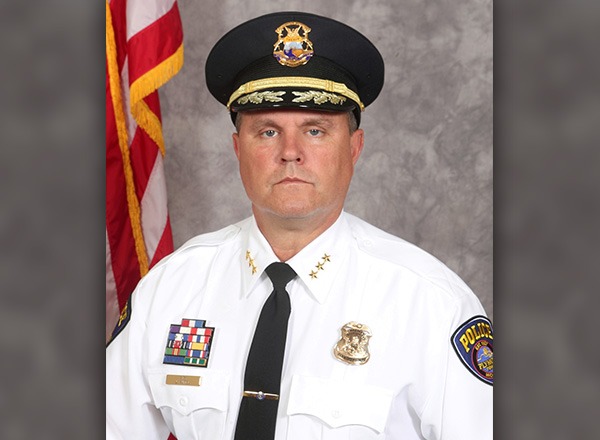 HFC alumnus James Knittel (pronounced “Night-tell”) has lived in Plymouth Township for 27 years. Recently, he has become its new police chief with the goal of engaging the community.

“I had been with the University of Michigan-Dearborn Department of Public Safety for four years before I left in May to become police chief in Plymouth Township,” said Knittel. “It was an opportunity I couldn’t pass up. I had no intentions of leaving UM-Dearborn, but I was approached about this position. It is in the community I live in, the community I love. Plymouth Township is a very nice area. It’s a safe and quiet community. I’m very excited to be here. I’m proud to say that my parents and my sisters and my sister-in-law live in Plymouth Township. It’s an outstanding opportunity to protect the local residents and my family.”

Following in his father’s footsteps

The eldest of three, Knittel was born in Detroit and raised in its Brightmoor neighborhood. His father, James Knittel, Sr., and his uncle, Ed Knittel, were both officers in the Detroit Police Department. His father was in the DPD for 26 years and retired as a sergeant. These two men inspired Knittel to follow their example.

“Growing up, I knew I wanted to be a police officer,” said Knittel. “The start of that for me was HFC. That’s where I started learning about the criminal justice system. The College put me in a position to achieve my goals.”

Knittel’s sister, Maureen Burke, is also a police officer; she works for the University of Michigan Division of Public Safety and Security in Ann Arbor. His youngest sister, Peggy Godi, is an executive at Ford Motor Co. in Dearborn.

For almost 24 years, Knittel has been married to Jackie, who works in the IT field. They have two children. Their son, James “Jimmy” Knittel III, is a junior at Michigan State University. Their daughter, Grace, a recent graduate of Mercy High School in Farmington Hills, will attend Grand Valley State University this fall.

Proud to be HFC

“I’m a non-traditional student who went back to get his master’s,” said Knittel. “HFC was a great experience for me – I can’t reiterate that enough. A lot of what I learned at HFC is what I learned and apply to my studies at UM-Dearborn.”

HFC taught him how to be a better student

HFC was a milestone in Knittel’s life.

“I heard a lot of good things about the College. I had friends going into law enforcement who knew the instructors there, many of whom were police officers from Dearborn, Detroit, even the federal level. It has one of the best criminal justice programs in the area,” he recalled. “I’m proud to say that I paid for all of my education. I didn’t want to be a burden on my parents. It was fiscally responsible for me to go to HFC. I got an excellent education and the price, in my eyes, was very good.”

Even in the late 1980s, HFC had a very diverse community on its campus, according to Knittel, where people from all walks of life attended. Knittel, who worked at the Fairlane Club in Dearborn during his HFC days, stated it was a good experience for him to meet people outside his circle.

“I earned 60 credits at the College to attend the police academy. It put me in a position to become a police officer. It was a great step in the right direction for my career,” said Knittel. “In high school, I admit I wasn’t the best student. HFC taught me how to become a better student. It taught me how to study and learn what was being taught. HFC was a maturing process, and HFC helped me in that process.”

Knittel began his police career at the Farmington Hills Police Department in 1987 as a police cadet, while a student at HFC. He worked for the FHPD for nearly 31 years, retiring in 2018.

During his long career with the FHPD, Knittel served with the patrol division, the crime suppression unit, and the investigative division. In the latter, he was a detective. In 2004, Knittel was promoted to sergeant. In 2007, he became group supervisor of the Drug Enforcement Administration South Oakland Narcotics Intelligence Consortium Task Force (SONIC), which was an area team made up of DEA special agents and police officers from Farmington Hills, Novi, West Bloomfield, and the Oakland County Sheriff's Department.

Knittel earned numerous awards throughout his law enforcement career, including a Chief's Citation, a Valorous Conduct Award from the Franklin Police Department, a Merit Citation, 10 Citations, 35 Unit Citations, six Commendations, and nine Letters of Appreciation. He was the City of Farmington Hills Police Officer of the Year in 2012 for his work with the DEA, which included the largest heroin seizure in Michigan history.

“I was a position where I was eligible to retire,” explained Knittel. “I was looking for a new challenge. My sister worked in the realm of higher education policing. I learned about an opening at UM-Dearborn and applied for it. It was a good opportunity to stay in policing but also to be in a different situation.”

“Jim Knittel is a true professional and shining example of what the public expects from their law enforcement officers,” said Ball. “He could always be counted on for assistance and helping build the partnership between our two institutions.”

Knittel replaces Tom Tiderington, who retired in April, as Plymouth Township’s Police Chief. Knittel has a great deal of respect for Tiderington, who also comes from a family of Detroit police officers.

“Chief Tiderington was one of the most respected law enforcement officials in the region. He did an outstanding job getting the department to where it is today. I plan to expand on the groundwork he laid, which is focusing on community outreach and community services. I plan to have a community police officer assigned to each district, working arm-in-arm with the community. I want to bring that vision to Plymouth Township.”

As the police chief, Knittel will oversee a deputy chief lieutenant, five sergeants, 18 police officers, three detectives, two task force officers for DEA and Homeland Security investigations, as well as a dispatch center for the city and township.

One of his goals is to have school resource officers in the Plymouth-Canton Community Schools in light of the tragic events that occurred at Oxford High School and many other schools in recent years.

“School safety is paramount. That’s one of my first priorities. It’s part of my community outreach,” said Knittel. “I’ve met with school principals about what we can do to protect our kids. Being with kids is one of my favorite parts of this job. We want them to know we’re here to protect and help them.”

Changing the public perception of the police

“We want to help our community, especially our senior community, and provide them with programs to help them identify fraudulent activity in order to be proactive with that,” said Knittel. “Plymouth Township Supervisor Kurt Heise runs a very good organization that works well with the police and provides outstanding service to our community.”

He believes this will go a long way to improve the public’s perception of the police, which has been under scrutiny for several years. Knittel admitted the last 2½ years of his career have been the most challenging.

“The law enforcement profession is under attack. Every interaction with a citizen that improves somebody’s perception of law enforcement moves the profession in the right direction. Yes, we have to write tickets and make arrests. That’s part of the job. But we endeavor to make every interaction a positive one, where we treat people with dignity and respect. That starts with me. If I’m not doing it, I can’t expect my police officers to do it. We aim to treat folks the way you wanted to be treated, the way you want your family to be treated. It’s an important profession, and we will conduct ourselves professionally.”