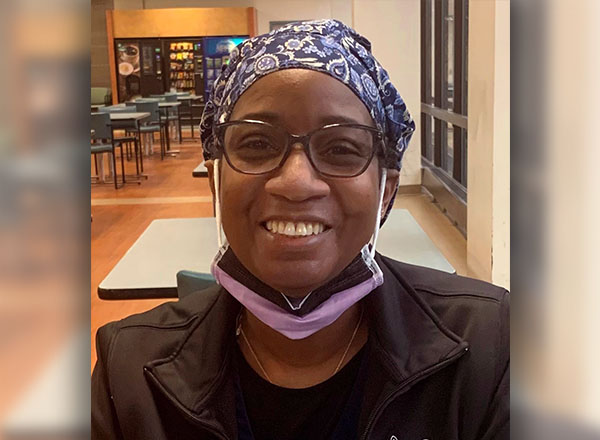 HFC alumna Donetta “Niecie” Hartley, a recent recipient of The DAISY Award for Extraordinary Nurses, was chosen to appear in an Ascension Providence Hospital commercial as part of its public outreach about working with a primary care physician.

“I was very nervous at first, but was truly honored to be able to be a part of it. I have always felt that Providence was there to support me through my career and schooling,” said Hartley, of Farmington Hills. “I was suggested to appear in this commercial by Lynn Chiesa, the Chief Nursing Officer of Ascension Providence Hospital in Southfield, who has been my mentor since 2004.”

When she first saw herself on the small screen, Hartley felt a bit embarrassed.

“We are our own worst critics! I saw hair and makeup flaws. I thought it was clear I was reading a script,” she said. “But everyone else loved it! My children and work family were very proud of me. That made me very happy.”

Cousin inspired her to become a nurse

A native of Manhattan, NY, Hartley is the second of three daughters raised by a single mother. A single mother herself, Hartley has two children and three grandchildren, with a fourth on the way.

Hartley attended Central High School in Detroit, but dropped out her senior year when she learned she was pregnant. She earned her GED a year later. In 1995, she earned her credential to become a medical assistant through the National Education Center.

“When I was younger, I wanted to be like my cousin Gina Hartley, who was a licensed practical nurse. I wanted to take care of people like she did,” recalled Hartley. “After being told I should go back to school, and watching my cousin Georgetta Robertson proudly graduate from HFC with an associate degree in nursing, I decided to go back.”

“She stood out for her enthusiasm, positive energy, and faith”

Hartley enrolled in HFC (then Henry Ford Community College) in 2000 and graduated in 2005, earning her associate degree in nursing. In 2018, she earned her bachelor’s degree in nursing from the University of Detroit Mercy. She has recently applied to UDM’s graduate nursing program.

“I went to HFC because my cousin Georgetta gave such great reviews about the nursing program. She would tell me about how great her theory and clinical instructors were, and how HFC cared so much about how their nursing students succeeded,” said Hartley. “My cousin’s words proved true: HFC cared about their students succeeding. Because i had not completed high school, I needed that ‘extra love.’ HFC offered so many tutoring programs to fit your schedule, especially being a single mother who had to continue to work full-time. HFC offered many programs and tutoring options to help me succeed.”

“Niecie was a student who stood out for her enthusiasm, positive energy, and faith,” said Bartos. “She was always focused on challenging herself, mastering the course content, and being a great clinician. I respected her as a serious student, and I knew she would be a great nurse. I actually ran into with Niecie after she graduated because we both worked for a local large healthcare system. She has had a number of roles in her career, and she has stood out in all of them.”

For the last 21 years, Hartley as worked at Ascension Providence. For the last seven years, she has been an assistant clinical manager in an acuity adaptable medical-surgical unit. Her duties include overseeing staff scheduling and charge duties, auditing, and implementing new practice standards.

“Although I am a supervisor, I am still a bedside nurse who loves to care for patients,” said Hartley. “The best part of my job is caring for and educating my patients and their families.”

Her ultimate career goal is to complete the Nurse Practitioner program, which will allow her to provide the best care possible and educate the public.

“The HFC nursing program has great reviews from hospitals throughout Michigan,” said Hartley. “I had great instructors who had a passion to teach us students what we needed to care for the public.”