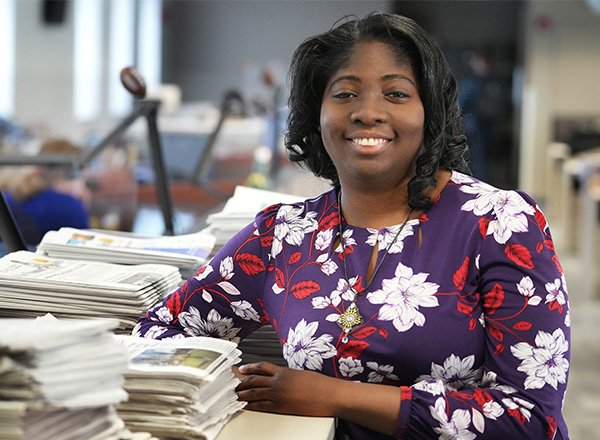 As someone who always enjoyed reading and writing, Micah Walker merged those passions together when she began her education at HFC.

“I wanted to see if I could make a career out of it, so I thought journalism was the perfect fit for me. I worked for The Mirror News (HFC’s student-run newspaper) to see if I wanted to pursue this career and ended up falling in love with it,” said Walker, a reporter for The Columbus Dispatch in Ohio.

An only child, Walker was born in Detroit and currently lives outside Columbus, OH. An alumna of Trillium Academy in Taylor, she earned her associate degree in general studies from HFC. She later transferred to the University of Michigan-Dearborn, where she earned her bachelor’s degree in journalism.

HFC laid the foundation for her success

Walker is still involved with the College as a member of the HFC Alumni Council, which she joined last year.

“I went there because I wanted to be in an environment and take my time with College, ease into the college experience, so I thought attending a community college would be for the best. Plus, HFC was close to home, so that was another bonus,” she said.

“I didn’t know much about sociology, then I took Dr. Harvell’s Introduction to Sociology class. He made the material fun and easy to understand,” recalled Walker. “Cassandra Fluker really saw a lot of potential in me. She was a big supporter when I started at The Mirror News. I still keep in touch with her today.”

Walker was a reporter at The Mirror News for two years. She covered a variety of topics, including entertainment and various school events. She even had a finance column.

“I had pretty amazing professors who saw the potential in me,” she said. “I also took several journalism and other communications classes. It really helped me see that journalism was the right path for me.”

Walker began her career as an intern with the Detroit Free Press, then worked at The Marion Star in Ohio as a reporter for a year before her current position at the Dispatch.

“After graduating, I was having trouble finding work. My internship with the Free Press did not turn into a full-time job,” she said. “In early 2020 – just before the pandemic – I was applying for jobs. In the summer of 2020, I decided to look out of state. I applied to The Marion Star. They got in touch with me right away, and I got the job! After about a year, my editor at the Star saw potential in me and thought I would be a better fit at the Dispatch, so he talked to editors there. I interviewed with them. They really liked me and offered me a job on the spot!”

At the Dispatch, Walker is a trending reporter and was part of its Mobile Newsroom where she and other reporters worked from a branch of the Columbus Metropolitan Library in a specific neighborhood of Columbus for about a month. Its purpose is to position journalists in an underserved area so that they can get to know residents, organizations, religious groups, business owners, and the entire neighborhood better. This is part of the Dispatch’s initiative to be more intentional about representing the entire community and its rich diversity.

“I enjoy having the privilege to talk to people every day, even if it’s just a short conversation. It’s such a privilege to have somebody be willing to open up to me and tell me their story,” she said.

Within the next 10 years, Walker sees herself as an editor at a major daily newspaper.

“I would love to help mentor the next generation of journalists and give them their shot like so many people did when they took a chance on me,” she said.

“Micah and I have a mentoring friendship, and it gives me great pleasure to see her flourish over the years as a young lady and a professional,” she said. “While an HFC student, Micah was an excellent and dedicated writer for The Mirror News and won many awards for her work. She always expressed that she wanted to be a journalist and because of her strong will, she did not let any barriers get in the way of reaching her goal.”

Fluker continued: “I am very proud of Micah. It fills my heart with absolute joy that she stayed the course in accomplishing her journalistic goals and still growing as an outstanding journalist. Micah is a beautiful person who has a realistic view of life. I’m often amazed at her stance on our topics of discussion. She is wise beyond her years, and I admire her tenacity and perseverance in building her success. I look forward to her next career move!”