“Why We Sing” premiere date set for March 30 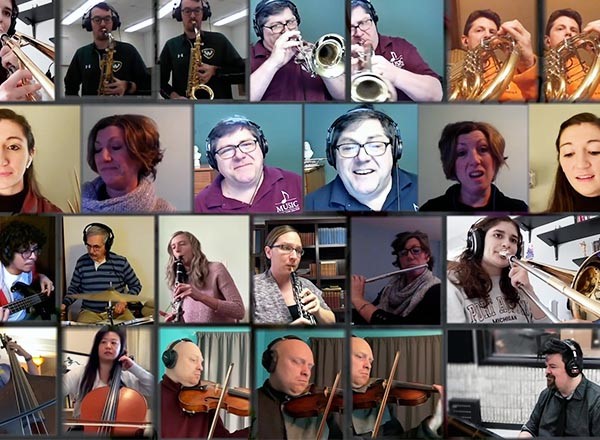 The premiere of Why Dearborn Sings’ performance of “Why We Sing” – which was originally scheduled for a March 23 release – has been rescheduled to Tuesday, March 30, at 7:00 p.m.

The reason the premiere was delayed a week was because of a “good problem,” according to HFC music professor/director of choirs G. Kevin Dewey. More than 125 students submitted more than 250 recordings, which was much more than initially anticipated. HFC Certificate of Achievement in Recording Arts (CARA) manager Jeremy Palmer has been working around the clock editing and mixing the video. Dewey goes into greater detail here.

“It’s become such a big project – much bigger than when we started it,” said Dewey.

“This song was chosen because it celebrates the importance of working together for a common goal while recognizing music is a universal language,” said Dewey.

The idea of a virtual chorus came about because many choirs can’t sing together due to the coronavirus pandemic. There is no healthy, safe way to meet as a choir, so Dewey had to get creative. He would lead a rehearsal via Zoom and would set up a guide track for the students to listen to while they sing their parts, making sure they stayed in time and in tune. After they recorded and sent Dewey their recordings, he would stack them, line them up, and play all of them at once so it sounds like an actual choir singing as one. He explained this to Dearborn City Council Member Brian Donnell at the March 21 meeting. The interview begins around the 38-minute mark.

Alongside the music teachers from the three Dearborn-based high schools, Dewey made a demo recording of “Why We Sing.”

“The whole point of this demo reel is for the high school students to not only see it but use it as a way to inspire them,” said Dewey. “I realize a virtual chorus is not the same as singing in an actual choir. That can’t be done until we can meet together again safely to rehearse and perform in public. This is something different, which choristers can do until then. It’s more like being a studio singer than being a choir singer because you learn the music through virtual methods, and record one voice at a time. This is a way to convince other people that even though it’s not live singing, it is fun singing and fun to be a part of it. There is artistry and technical skill development. It’s educational and it’s purposeful.”

To date, the HFC Music YouTube Channel has 13 videos available for the public to view. More will be added by the end of the Winter 2021 Semester.

“I assure you that as soon as we can return to live rehearsals and performances, we will be pleased to make music together again and to bring you concerts you may attend,” said Dewey.