“I never thought college would be in my future,” says honors graduate 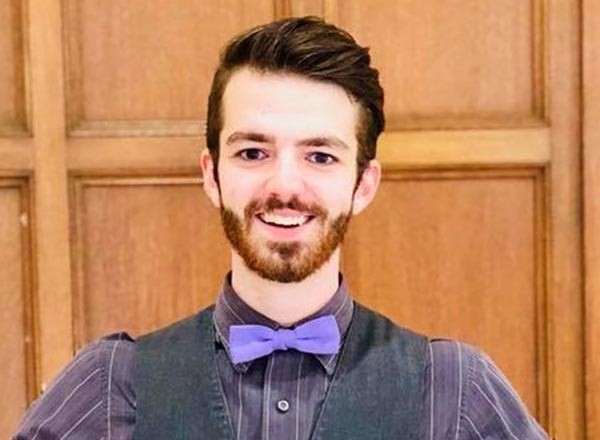 Jesse Mattox describes himself as a "non-traditional college student at its finest." With his background, it's hard to disagree.

“I never thought college would be in my future. Coming from a lower economic background, I did not believe it could be,” said Mattox, of Ann Arbor. “I was definitely not a good student in high school and would never pretend to be so. I dropped out of high school my sophomore year, only to re-enroll the year after and continue until I earned my diploma.”

After graduating from Woodhaven High School in Brownstown Township in 2012, Mattox worked as a waiter to support himself. He moved around a lot between apartments and jobs in the food service/hospitality industry for five years.

“When I was 23, I was working full-time at the P.F. Chang’s at the Detroit Metro Airport and living with my partner at the time. I was not necessarily unhappy, but life felt stagnant,” he explained. “I wanted to start making positive changes to my life and felt that beginning my adventure into the realm of academia would be a good start. I was not sure what I wanted to do with my life, but I knew I wanted to begin doing something worthwhile.”

The importance of a focus on individual success

Mattox decided to enroll in HFC.

“HFC was close to home. It was convenient, offered a multitude of classes that fit my busy work schedule, and I had actually enrolled right out of high school but never registered for classes. I was thinking it was about time I picked up where I left off,” said Mattox. “With HFC, something was different. I was excited to be in this new environment, if not a little intimidated, but I wanted to do my best.”

While at HFC, many opportunities presented themselves to Mattox. Not long into his time at HFC, English professor Chelsea Lonsdale suggested he join the Henry Ford II Honors Program, which he did.

“The Honors Program benefited me in countless ways – some of which I am sure I have yet to realize,” said Mattox. “It gave me the opportunities necessary for success and the motivation to do so. I was able to connect with HFC staff and faculty on a more individual level. Whether it was through meetings with my personal mentor in the program, being involved in volunteer events, taking part in three directed studies, or developing an academic résumé, HFC is an environment catered to individual success that all starts with preparation.”

Extracurricular activities at HFC also made a difference

He spoke about his involvement in founding SAGA.

“This was a collaborative effort between me, a few other peers, and Chelsea Lonsdale. I am openly bisexual, and my identity permeates my academic work at times. We noticed that there are a lot of services provided at HFC to cover a wide array of needs, but nothing that focused on the needs of the LGBTQIA+ community, apart from a few gender-neutral restrooms [SAFE@HFC is also a major support organization at HFC for the LGBTQIA community]. Together, we wanted to provide a feeling of inclusiveness, safety, and security to students who needed it,” explained Mattox.

One of Mattox’s loves has always been theater. He took part in more than 10 plays at HFC, beginning with Blithe Spirit and ending with Lobby Hero. Mattox also volunteered for the Human Library event.

Mattox participated in the Undergraduate Research Opportunity Program (UROP) at the University of Michigan (U-M) in Ann Arbor. Through the Transfer Bridges to the Humanities @ University of Michigan, Mattox transferred to U-M after graduating from HFC with his certificate in deaf studies in 2019.

“I intended to receive an associate degree, However, I ran into financial aid troubles and was not able to receive funding for my final class. I’m hoping at the end of this semester to contact HFC once I have finished my quantitative reasoning credit at U-M, to see if that can be used to complete the requirement that kept me from a degree originally,” he said.

Currently, Mattox is double-majoring in drama and women and gender studies with a minor in American culture at U-M. He expects to graduate in late 2021. Mattox would like to pursue graduate studies in WGS and history at U-M.

“Blending my love for theater and WGS, I want to add on a graduate certificate in world performance studies to my doctoral program as well. Theater and WGS have certain parallels within their framework that can amplify each other. I believe that doing dramaturgy work for a play and developing a character within the confines of a script is strengthened by understanding society and the way personal experiences are shaped by the intersectional factors of identity in relation to western culture and the systems of power and vice versa. This can be done by portraying a character that invokes a personal response as an actor or watching a production, speech, or some other form of narrative unfold on stage. There is a powerful connection between empathy and understanding of an individual’s life in relation to performance,” he explained.

Finding a purpose in academia

Ultimately, Mattox would like to become a professor and teach – perhaps at HFC or U-M.

“I found a purpose in academia and HFC. The connections I made in my three years there was a crucial part of that self-discovery,” he said. “I want to be the teacher who believes in a student enough to put them on a path to success that they never thought possible for themselves, much like Chelsea Lonsdale did for me. Her invitation to the Honors Program and friendship along the way changed my life.”

HFC had such a profound impact on his life, Mattox recently produced a video about his experiences at the College (see video at the bottom of this page).

“As a theatre major, I understand the connection one can make with their audience when talking about their experiences,” he said. “While I am comfortable in expressing myself in writing, I wanted this to be more personal than that, so I set my mind to recording a testimony. My time at HFC was one of the most enjoyable experiences in my life, and I felt I could best express my gratitude for my time there and the staff and faculty I met along the way through this video. I am also aware that not a lot of people will jump on the chance to record a video speaking of their experiences, so I like to provide that material if I can.”

HFC is an environment that pushes you to succeed

"Jesse is a wonder of a human," said Lonsdale. "He’s an incredibly talented student, scholar, and actor, and it’s been my privilege to work alongside him as a teacher and mentor over the past few years. Jesse and I come from similar backgrounds, so his story resonates with me deeply. HFC has been, for both of us, a critical place for self-discovery. It brings me great joy to see him continue on at U-M, and I look forward to watching his future unfold – maybe he’ll find his way back to HFC as faculty someday!"

Mattox makes it clear that he would not have been able to succeed at U-M – or even attend U-M – had he not come to HFC first.

“Without HFC, I would not be at U-M,” he said. “I have thought about this often as I reflected on my own experiences within my field of study. I am a first generation, independent college student from a lower economic background. Attending U-M was originally outside the realm of possibilities and opportunities determined by the circumstances I was born into. That is not to say that I was lacking the capability to succeed; I just never knew my own potential until HFC allowed me to see that.

"HFC is an environment that pushes you to succeed while taking into account the fact that each student is an individual with their own lives and diverse backgrounds. I enrolled at HFC with the hopes of bettering my life. No plan or real purpose of any kind, just a steadfast determination to do well. That motivation was the start of a path being laid out before me that I just needed to follow. It’s a path that I am still following to this day.”

Jesse Mattox tells his story, and shares his sources of inspiration and resilience, in this 2.5-minute video.