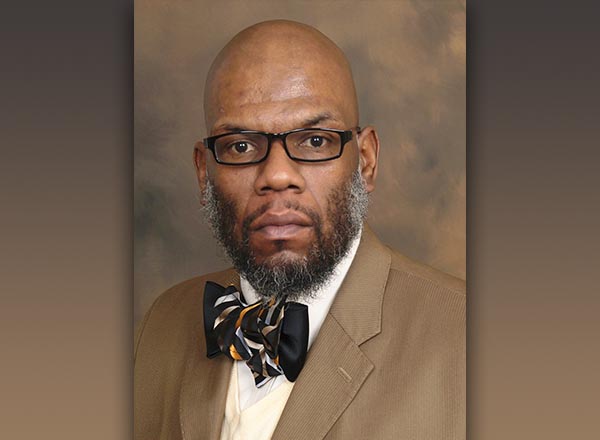 HFC sociology professor Dr. Kalvin DaRonne Harvell will speak at a mini-symposium titled, “What to the Slave’s Children Is the Fourth of July?” on Friday, July 2, at the University of Wyoming Black Studies Center‘s inaugural Cultural Competent Summer Forum Series. This is a virtual event. (A recording will be available afterward for those unable to attend).

The mini-symposium will discuss and reexamine the implications and vestiges of one of Civil Rights icon Frederick Douglass’ most famous speeches to deconstruct the phenomenon of current exclusionary educational policies in America, according to Dr. Fredrick Douglass Dixon. Dixon is the namesake of the 19th Century Civil Rights leader. He is director of the UW Black Studies Center, which was formed as a response to the social and political unrest that followed in the wake of George Floyd’s murder by police officer Derek Chauvin on May 25, 2020 in Minnesota.

Dixon and Harvell met at the annual Black Male Retention and Success Conference hosted by the HFC Black Male and QUEENS Focus Group (BMQFG), for which Harvell serves as the faculty advisor.

“Dr. Dixon invited me to participate. My participation is a result of Dr. Dixon’s commitment to Ujima (collective work and responsibility) as a means of building scholarly communities that work toward practical solutions to social challenges. Rather than accessing knowledge for the sake of knowing, like Dr. Dixon, we must utilize our research to navigate, address, and ultimately dismantle oppressive intellectual regimes,” said Harvell. “One of the original goals of this conference was to develop a network of local, state, and national scholars to guide our BMQFG students. Additionally, we continue to work to create an organization focused on best practices scholarship designed to dismantle the access gap and enhance the success of Black students.”

The mini-symposium schedule on July 2 is as follows:

What has changed and what has not changed

“In this speech, Douglass critically examined the hypocrisy of the Fourth of July as a day of independence. He called into question independence for whom. Douglass was well aware he was delivering this speech on land violently seized from Indian nations and developing economic prosperity through the forced exploitation of Black bodies,” said Harvell. “Indeed, Douglass was challenging the assumption that there is a collective consciousness of the so-called United States and that everyone is seen, valued, and respected as equals.”

Harvell continued: “His speech tells us that the independence of one person is contingent on the systematic exploitation of the masses. Indeed, socially constructed racial hierarchies continue to inform our life chances in the so-called United States. This mini-symposium is an extension of the original title and asks the question, ‘What to the Slave’s Children is the Fourth of July?’ Dr. Dixon put together a panel of scholars, people who have earned degrees from some of the best oppressive academic institutions in the country, people who are the descendants of those people whom Douglass was talking about, to engage this timely and continuing conversation.”

Specifically, Harvell will provide a structural analysis of the social system and discuss why the U.S. has not changed in the meaningful ways people think, dream, or wish.

“Our knowledge of the country is informed through racial hierarchies and our ability to dismantle or embrace hegemony,” he said. “I will talk about my own intentional and critical use of language (the ‘So-Called United States,’ the ‘Fourth of You Lie,’ ‘Thanks-taken’) as a vital departure from the master script and development of a language and method of liberation. Although people continue to engage in sweet talks of diversity throughout the country, the so-called United States is not serious about embracing diverse ideas and practices that require it to reflect on its nefarious relationship to Black people. I plan to discuss this insincerity.”

Each presentation will deconstruct Douglass’ speech, which he gave on July 5, 1852, comparing and contrasting it to contemporary issues, said Dixon. Its viability will be applied to current polarizing social and political conditions.

“Frederick Douglass led the charge of the marginalization of critical race theory,” said Dixon. “We want to make sure this mini-symposium will further augment and enhance his speech. This speech will revisit the clarity and depth and how that will become important to current and future generations. We must expand on it and not get stuck in the past.”

Harvell, the only academic representing a community college, is looking forward to speaking at this mini-symposium.

“Dr. Dixon is continuing the work of our ancestors and should be commended for his scholarship, sincerity, and community building,” he said. “The BMQFG is excited to build with Dr. Dixon and UW as we continue to navigate the precarious relationship between the Black Nation and the so-called United States.”

This event is free and open to the public. To RSVP, email Dixon at fdixon@uwyo.edu.