Notice: This article is more than one year old and is part of the Henry Ford College news archive. Information in the article may be outdated. For the most current news and information about Henry Ford College, please visit hfcc.edu/news, or contact communications@hfcc.edu.
Release Date:
Tuesday, January 21, 2020 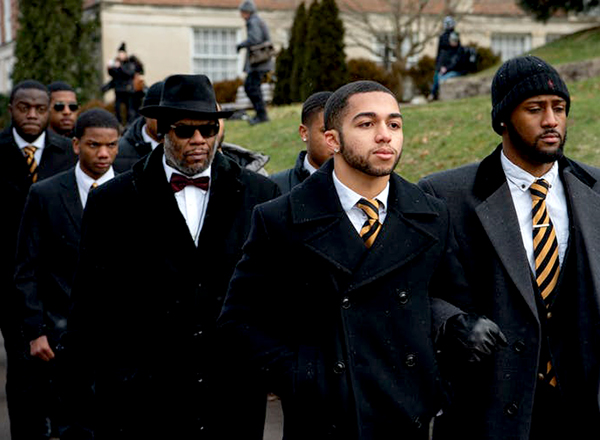 As at many institutions nationwide on Dr. Martin Luther King, Jr. Day, a march was a centerpiece of the event. The march was led by the brothers of Alpha Phi Alpha fraternity, many of whom marched arm-in-arm to honor Dr. King, the ongoing work of civil rights, and each other.

Dr. Harvell was the keynote speaker at the event.

"One of the most important things that Dr. King talked about later in his life is of the two Americas, which means that it's important to celebrate him, so we can be attentive to the fact there's still unfinished business in terms of his dream,” said Harvell. “A lot of people assume that the journey was complete on April 4, 1968, because King was assassinated. But he himself said, ‘I may not get there with you, but we as a people will get to the promised land.’”

After he returned to HFC, Dr. Harvell said, "I gave students a charge to continue the unfinished business of Dr. King. Although I received a great deal of positive feedback, the most meaningful responses came from two young women who said they are now planning to go to graduate school because of how moved they were by the clarity of my talk!"

Read the complete story and see more photos at The Post, Athens.