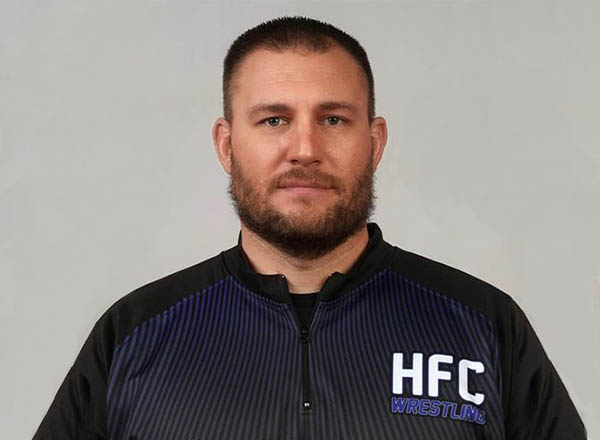 In his ongoing desire to become a better coach, HFC assistant wrestling coach Joshua Priebe successfully completed the 2021 Summer CEO Leadership Academy, which was sponsored by the National Wrestling Coaches Association in Towson, MD. He attended the academy on a full scholarship.

“It was a great experience, and it gave me the opportunity to network with other wrestling coaches from across the country. I also ran into people from my past, which was fun. It makes you learn and think about different aspects of coaching you normally wouldn’t think about – the administrative tasks, recruiting, growing the sport, fundraising, being a good leader to the athletes outside the sport,” explained Priebe, of Plymouth, a police officer for the City of Wayne.

“All coaches who apply for the scholarship program must go through an extensive review process by a selection committee. Only the ‘best of the best’ coaches are awarded full scholarships. (Coach Priebe) is a member of this exclusive group,” said NWCA Executive Director Mike Moyer.

An asset to HFC’s wrestling program

The NWCA has invested more than $1 million into the development and implementation of a comprehensive CEO leadership development program designed to help college coaches sharpen their skills and promote “best practices” to improve their athletes’ academic performance. Since 2000, the NWCA has helped to establish more than 270 new college wrestling programs at all levels. The academy is the NWCA’s primary strategy to ensure the sustainability of these new programs, as well as existing programs.

“(HFC Wrestling Coach) Grant MacKenzie and I were talking at the end of this past season. We’re pretty close and are always trying to get better at coaching and always giving each other feedback. He attended this academy and told me how much he loved it. Right then and there, I went online and started applying,” recalled Priebe.

“Coach Priebe is a tremendous asset to our wrestling program, and I’m grateful he was selected to attend the NWCA’s CEO Leadership Academy,” said MacKenzie. “Our wrestling team will benefit from the tools and training Coach Priebe received during this intense learning experience.”

Serving in the Navy for six years

Born in South Bend, IN, Priebe is the second of four children and the only son. His family moved to St. Clair when he was two. A 2003 alumnus of Marine City High School in St. Clair County, Priebe was on the wrestling, football, and track teams all four years. He was captain of the wrestling team his senior year. He was vice president of student council his junior year and president of student council his senior year. Additionally, Priebe was a member of the National Honor Society for two years, as well as a member of the drama club.

Priebe earned his bachelor's degree in history at the United States Naval Academy in Annapolis, MD, where he continued his wrestling career. For six years, he was on active duty in the U.S. Navy, serving in Japan aboard the USS Harper’s Fairy LSD-49 and serving in Pearl Harbor, HI aboard the USS Ruben James FFG-57.

After being honorably discharged, Priebe graduated from the Police Academy through Schoolcraft College in Livonia. He also coached wrestling for three years at South Lyon East High School before coaching at HFC, a position he began in 2018.

“I love coaching with Grant. He’s a great guy. He’s given me the opportunity to grow as a coach. He’s so involved with the guys. He helped me get ready for the academy and he was the one who introduced me to HFC, where I’ve gotten to meet other coaches and network with other people,” said Priebe. “Grant’s given me the opportunity to run practices. He lets me focus on wrestling while he worries about everything else. He makes life so much easier, and I have so much fun as a coach.”

Priebe spoke about what he loves most about coaching and the challenges that come with it.

“My favorite part is being able to work with student athletes and teaching them something. When you see them grow and use what you taught them, that’s the coolest aspect for me,” he said. “With wrestling, it’s such a long season because it begins in the fall semester and ends in the spring semester. It’s always a mental battle. You have to make sure the students’ grades are good. Then there’s the food issue. Thanksgiving and Christmas are in the middle of the season, which makes it hard for some students to maintain weight. Once you get through those breaks, January through March tends to be a bit dark and cold outdoors. I have to keep them motivated, healthy, and eligible, as well as focused on the end goal in March: the national championships.”

Looking forward to the upcoming season

“I’ve love it here at HFC. We have a great wrestling program here. Grant has done a phenomenal job. HFC Athletic Director Rochelle Taylor has been very helpful and supportive; she’s a great AD. We have good students who love the sport of wrestling. I’m looking forward to having a successful season. I see good things coming from the program here,” said Priebe.

MacKenzie has high praise for Priebe.

“Coach Priebe demonstrated firsthand what our No. 1 core value – FutureDriven – looks like,” said MacKenzie. “Coach Priebe wanted to develop his craft as a coach to better serve our student-athletes by unselfishly using his personal time and talent to be trained by amazing leaders in the sport of wrestling.”