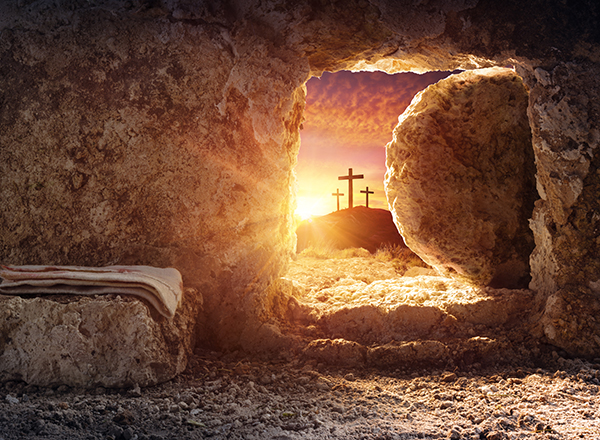 On Sunday, April 12, Christians worldwide will celebrate Easter. This is the holiest day of the Christian year.

What do the holidays of Holy Week, Good Friday, and Easter mean?

The Christian faith centers on the life, death, and resurrection of Jesus. As I noted in my message about Christmas last December, Christians believe that Jesus was the Son of God and savior of all humankind.

Some Christians observe a 40-day season of reflection, fasting, and repentance before Easter. This season is called Lent, and it begins on a day called Ash Wednesday.

Here is a brief explanation of the Christian belief about Easter: Jesus of Nazareth was a Jewish man who grew up to be a carpenter and a religious leader. He built a popular following by speaking to crowds about how to follow God. He brought about healings and other miracles while traveling throughout Galilee with his 12 disciples, who pledged to follow him and support his ministry.

When he was in his early 30s, Jesus made a triumphal entry into the city of Jerusalem just before the Jewish holiday of Passover. He was met by a cheering crowd waving palm branches. The day of his arrival in Jerusalem is celebrated by Christians as Palm Sunday, one week before Easter.

The week between Palm Sunday and Easter Sunday is called Holy Week by some Christians. They believe that many significant events took place during this week in Jesus’ life. Among them:

Pilate did not find Jesus guilty or innocent. Instead, he asked a gathering crowd which prisoner they wanted to set free: Jesus, or an accused man named Barabbas. Freeing a prisoner at Passover each year was a Roman tradition, allowing an incited crowd to extend clemency by voice acclamation. The crowd shouted that they wanted Barabbas to go free. This meant that Jesus would be executed. The means of execution was crucifixion, in which the accused was tied or nailed to a cross until they died.

Later that day, which Christians now commemorate as Good Friday, Jesus was beaten and wounded as he carried his cross to a place called Golgotha, or Calvary, where he was nailed to that cross by Roman soldiers. Two other prisoners were crucified at the same time.

Jesus’ body was taken down and placed in a tomb. A large stone was placed over the tomb’s entrance to prevent the body from being removed by Jesus’ followers.

Early Sunday morning (now celebrated as Easter), women who had been friends of Jesus went to the tomb to anoint his body with spices and oils. When the women arrived at the tomb, they found the entrance stone rolled away. Two of Jesus’ disciples arrived around the same time. An angel appeared and told them that Jesus had risen from the dead.

Later that day, the risen Jesus appeared to his disciples and showed them his wounds. He remained among them for 40 days. Many people saw him during this time. After 40 days, he ascended into heaven, where Christians believe he awaits the time when all Christians will join him there.

Many Christians believe the death of Jesus was an atonement for the sins of all humankind and that Jesus’ resurrection frees all believers from the consequences of sin.

Easter is a festive, joyous holiday for Christians. Most attend exuberant church services on Easter Sunday, or a vigil service on Saturday night. Exclamations such as “Hallelujah!” and “He is risen!” are common. Families and friends often gather in large groups and enjoy lavish meals at Easter.

Easter has been a significant holiday in secular society as well as among Christians. The holiday is associated with the coming of spring. In our region, and elsewhere, children often dye hard-boiled eggs and receive colorful Easter baskets filled with candy and treats said to have been brought by the Easter Bunny. The White House Easter Egg Roll, a tradition initiated in 1878 during the administration of U.S. President Rutherford B. Hayes, persists to this day on the South Lawn (though the event will not be held in 2020).

This year, it will not be possible for many families and friends to gather for Easter as they normally would, and most will not be able to attend face-to-face church services. Many churches are hosting online services. Families will likely gather in their own homes and keep their extended communities in their minds and hearts as they observe Good Friday and celebrate Easter. In whatever form these gatherings take place, the holiday represents the joy and faith of Christians and those who support and honor them.

To all who celebrate, Happy Easter!