Notice: This article is more than one year old and is part of the Henry Ford College news archive. Information in the article may be outdated. For the most current news and information about Henry Ford College, please visit hfcc.edu/news, or contact communications@hfcc.edu.
Release Date:
Sunday, April 12, 2020 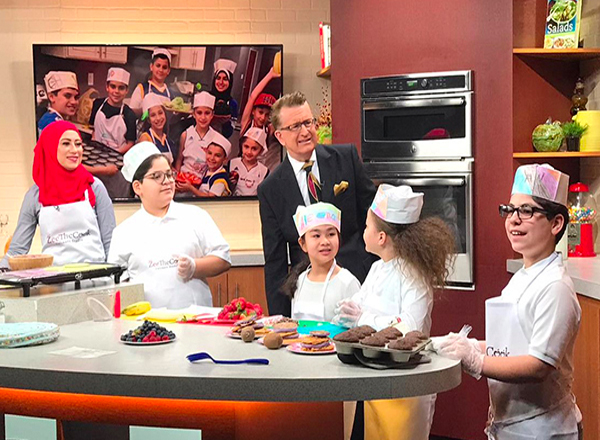 “I’m very humbled and grateful for the Success Award, because it recognizes my hard work and growth over time. It empowers me to continue believing in myself and reminds me to continue on even when times may get tough!” said Shami, who lives in Dearborn with her husband Shadi (whom she met at HFC) and their three children.

“We provide a positive and empowering space where people can come together to cook, bake, grow, and learn while building relationships. Everything from summer camp programs to school field trips, to corporate team-building events, to mom and me workshops, to birthday parties and community events – our team continues to work hard in achieving our goals,” explained Shami.

Its purpose is to help students of all ages to expand their minds and enhance their taste buds, while tapping into their creativity. Hands-on recreational cooking classes combine culinary techniques and fresh ingredients and – of course – plenty of fun, according to Shami.

“Our goal is to help others develop culinary skills through cooking demonstrations, while instilling confidence and playfulness in each of our classrooms,” said Shami. “We help build healthy memories, embrace and strengthen friendships, and allow each person to find and feed their own soul.”

ZeeTheCook, LLC has been featured on Channel 7 and FOX 2. In February, Charlie Langton interviewed Shami and her posse of enthusiastic students on FOX 2.

“Over the years, we’ve gotten a lot of news coverage, talking about creativity, positive social experiences for kids, and how we use classes as a tool to bring people together,” said Shami. “We appeared live in-studio at FOX 2 in Detroit. We were there around 7:00 a.m. and made pancakes and muffins. Charlie sampled our cooking and thoroughly enjoyed it. He interviewed some of the kids, who gave him positive feedback about what we do.”

According to Shami, her business isn’t only about producing future chefs.

“We’re trying to create future independent people who can take care of themselves and their families,” she said. “People today are always on the go and eat out a lot. Rather than eating out, we’re teaching them to enjoy healthy meals they can make themselves that aren’t difficult or time-consuming. For us, it’s all about the well-being aspect.”

Interestingly enough, Shami never took a class in HFC’s Culinary Arts program during her days at the College. In fact, she planned to become a nurse, taking classes in HFC’s Nursing program, as well as general education classes during her time at the College from 2004-08.

“I’ve always been a natural leader, and I knew I wanted to go into a leadership position as a lifelong career,” she said. “If I continued with nursing, it would’ve taken a lot longer to achieve that type of role. I’m an all-action individual, so a year into nursing, I decided to explore new opportunities. I knew there was something else waiting for me, but I didn’t know what it was.”

She gave herself a few years, working various jobs – completing nursing rotations at Providence Hospital in Southfield – and traveling, as well as getting a better understanding of what she enjoyed doing. Those years were instrumental in her development as a business owner.

“I knew I liked taking care of people, and later discovered my passion for cooking, which eventually led to my entrepreneurial journey of opening up a culinary studio to empower and care for people through hands-on cooking workshops, leadership camps, health and wellness classes, and so much more,” said Shami.

Shami has fond memories of her HFC days. First and foremost was meeting Shadi, her husband of eight years. Shadi Shami is a Lead Nurse Manager at Garden City Hospital and a Clinical Nurse Instructor at HFC.

“There’s definitely a memory that will always stand out: We took the same Anatomy and Physiology course together at HFC. I remember being jealous that Shadi got straight As on every exam,” she recalled, laughing.

Shami chose HFC because of the convenience of being close proximity her home, work, and school. All three were located within minutes of each other.

“That was the only way for me to be successful at the time,” she said. “Another great memory is the simplicity and uplifting energy of the nature walks I would take around the College inbetween classes. I loved it there.”

According to Shami, she was also inspired by HFC’s rich diversity.

“HFC is home to students of all ages, diversities, cultures, and statuses – that really helped me expand my knowledge of the diverse world we live in,” she said. “HFC helped me to socially expand my circles and open my mind to new opportunities. The counselors and administrators were really great at guiding me through my educational journey.”

Although she hit a few bumps on her road to opening a successful business, Shami wouldn’t change it for anything.

“The best part of my job is the difference I’m able to make in so many people’s lives for the better. Whether it’s community involvement or training employees on the importance of the human connection, teaching kids and teens how to live healthier lives during our day camps, and being a part of so many people’s special memories as they build their relationships – I love it all,” she said.

Her advice on becoming successful is believing in yourself.

“Surround yourself with positive people who also believe in you,” said Shami. “Define success on your own terms, achieve it by your own rules, and build a life you’re proud to live!”