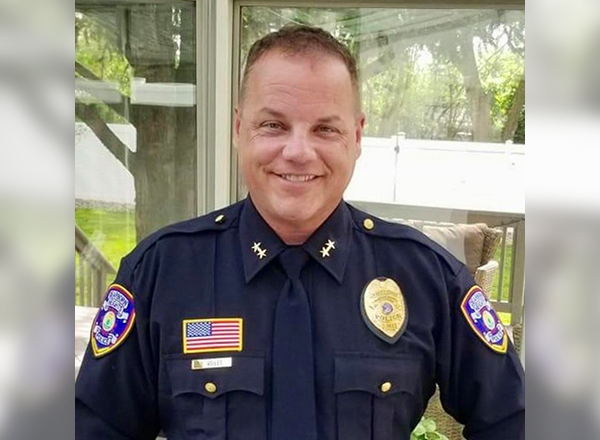 On May 27, HFC alumnus Gary Voiles was promoted to the deputy chief of police at the Dearborn Heights Police Department.

HFC alumnus Gary Voiles, the newly-promoted deputy chief of the Dearborn Heights Police Department (DHPD), confessed he didn’t expect to make it this high up the food chain during his police career.

Yet, on May 27, he became the second-in-command at the DHPD.

“I am happy that I have a leadership role in this department. I still enjoy training others, but I have more administrative responsibilities. And I have not forgotten where I came from. I attend roll calls frequently to socialize with young police officers. I want to do everything possible to eliminate the ‘uncomfortable’ gap between patrol and command. I am proud to work with the new chief, Mark Meyers, and both captains. I have worked with many great people in the past, and I am thankful for the experience and guidance I have received over the years,” explained Voiles, of Metro Detroit.

A 1986 graduate of Annapolis High School in Dearborn Heights, Voiles majored in criminal justice at HFC (when it was Henry Ford Community College). His father, Dean Voiles, earned his journeyman’s card as a master electrician from the College in 1980.

“The curriculum was relevant and geared toward my career choice. I liked the convenience, affordability, the available classes, and the curriculum. It was a very laid back and non-intimidating atmosphere for a new student,” recalled Voiles

After earning his associate degree in 1988, Voiles went on to the Wayne County Regional Police Training Academy, graduating in 1994. He earned his bachelor’s degree in criminal justice from Madonna University in Livonia in 2001. He also graduated from the Eastern Michigan University (EMU) School of Police Staff and Command in 2015.

“I was really attracted to the rapidly changing duties and roles of a police officer,” said Voiles, who emphasized the use of de-escalation techniques in successful community policing.

“Mostly, I wanted to be the non-stereotypical police officer who would try to change how the public perceived police officers in general. My career was dedicated to being the nice guy – I called everyone ‘ma’am’ and ‘sir’ and treated people with the utmost respect. Most often, I was able to convince people to do logical things – such as not resist arrest or to voluntarily leave a residence during a domestic dispute – by putting myself in their shoes. I was very sympathetic to people. Many people in distress do not have valid criminal complaints, but just want to be heard and to know that someone cares.”

Voiles has spent his entire career affiliated with the DHPD. He served as a patrolman, evidence technician, field training officer, firearms instructor, driving instructor, mountain bike instructor, and detective. He later worked undercover in special operations, where his cases involved drug trafficking and prostitution, as well as other special investigations. He later topped the list of those who tested for the sergeant's rank.

For five years, the DHPD deputized Voiles as a federal task force officer for the Drug Enforcement Agency (DEA). He was the DHPD’s liaison to the DEA, working out of the DEA’s Detroit office.

During his time as a captain in the DHPD, Voiles became known as “Captain COVID” because he was in charge of ensuring all DHPD officers had the proper personal protection equipment (PPE) and followed the proper safety protocols to safely and smartly do their jobs during the pandemic.

“Even prior to COVID-19 being labeled a pandemic, the DHPD started procedures for the entire agency to ensure the safety of our police officers,” said Voiles. “I worked tirelessly on equipment purchases, safety protocols, and research until everything was done to keep everyone as safe as possible. Some may think we went overboard with safety precautions, but when you are responsible for the health and safety of nearly 100 people and their families, playing it safe was the right move against the invisible enemy.”

Recently-retired DHPD Chief of Police Michael Petri, who also teaches criminal justice at HFC, once told Voiles, “You always want to strive to leave the DHPD a better place than when you found it.”

“My goals are to see everyone through this pandemic and know that I have done everything in my power to keep the citizens of this city as safe as I can,” said Voiles. “I want to make sure our officers have every reasonable piece of equipment necessary to do their jobs safely and proficiently. I want every officer to have as much fun while working hard to keep the citizens and business owners safe in this city as I did.”

The challenges of being a police officer

Voiles spoke about the challenges of being a police officer, particularly in the current climate.

“I have to train young police officers to truly understand how dangerous this job is and that you have to find a way to keep your guard up, yet be caring and compassionate. There is no room for complacency in police work!” he said. “Even more challenging is dealing with the current state of policing. Police officers have an extremely difficult job, and they see people sometimes at their worst. They help people every day with significant difficulties in their lives, and then move on to help the next person. It really is a shame that some bad officers have tarnished the image of police officers everywhere.”

Voiles continued: “I would just tell anyone who is considering a career in law enforcement to think it over before you make that choice. This career is not for everyone. The job needs people who are willing to learn to be the best at their professions and who are willing to go the extra mile to help humanity.”

Meyers, the new chief of police, recognizes Voiles' commitment to the city and its citizens.

“Deputy Chief Voiles has earned his position serving the residents of Dearborn Heights with great sincerity and compassion,” said Meyers. “Our community is his community. He was raised here, went to school here, and has worked for our community his entire adult life. His commitment to the safety and protection of Dearborn Heights is only equaled by his concern for the health and well-being of the officers he leads.”