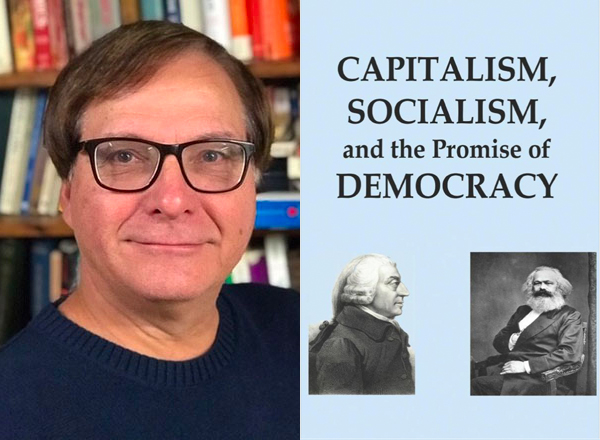 Dr. Bill Barber says his first book, Capitalism, Socialism, and the Promise of Democracy, evolved from more than three decades of teaching economics at HFC.

The process of writing the book took him about 10 months.

“The main challenge was to consistently motivate myself to sit down and write. It takes a certain amount of commitment and a specific frame of mind to get the project done. I kept reminding myself that I shouldn’t get wedded to the outcome; it’s just as important to appreciate and enjoy the process. That helped me a lot in keeping at it. Also, I wanted to be sure that I was doing my best work,” explained Barber, of Dearborn Heights.

This is Barber’s first book. He’s now writing a book about investing, based on the material he teaches in BFN 130: Beginning Investment. Since there wasn’t a textbook that covered the topic in the way he thought was best, Barber wrote the material himself.

“Students have been very receptive to it, some even suggesting that I should publish it as a book for young people on investing,” he said. “I am in the process of doing that, and I hope to have it completed by the end of the year.”

“When talking to people – and not just students – I became aware that people in general didn’t know exactly what terms like these meant,” said Barber. “What is a Democratic Socialist? How is it different from being a socialist? What is a Democratic Capitalist? How is that different from being a capitalist? I felt there was a need for a book like this to explain these things.”

Barber stated the book tries to answer four basic questions:
1. Where have we been?
2. How did we get here?
3. What’s happening now?
4. Where should we go?

“The current economic situation we find ourselves in didn’t just happen. It was a process that developed over several decades. If we’re going to effectively solve our economic problems and move forward, it’s important to understand how we have arrived at the system we are currently living in,” explained Barber.

Capitalism, Socialism, and the Promise of Democracy examines the different ways that advocates of capitalism and advocates of socialism addresses the following questions:

• Why are some people so rich and some people so poor?
• Why do some have so much, and others have so little?
• What, if anything, can or should be done about these issues?

During his time at Western Michigan University, Barber had a professor who emphasized the interactions of sociopolitical factors on economics. This spurred his interest in the history of economic systems and how they developed, something he’s always included in his economics classes.

However, is that really true? In recent debates, Sanders has argued that we currently live in an Oligarchic Capitalist system, which is a system ruled by wealthy elites.

According to Barber, the Oligarchic Capitalist system collapsed with the stock market crash of 1929, which was followed by the Great Depression. A new system of Democratic Capitalism was ushered in with President Franklin D. Roosevelt’s New Deal. This particular system of Democratic Capitalism, characterized by increasing income equality and wealth equality, lasted until the election of President Ronald Reagan in 1980, when the foundations of a second era of Oligarchic Capitalism were laid. This is the system we have today.

“This second era of Oligarchic Capitalism, like the first, suffered the financial crisis of 2008 and the Great Recession,” he said. “A second Great Depression was avoided due to the lessons learned from the previous crisis. We are now embroiled in a debate about what should be done. There are forces that want to maintain and protect Oligarchic Capitalism, mainly wealthy elites. There are forces that want to re-institute the system of Democratic Capitalism that existed from 1945 to about 1980. And there are forces that want more dramatic reform, the creation of a system of Democratic Socialism. My book explores these issues by looking at where we have been, how we got we are, what is happening now, and where should we go.”

The book discusses the origins of economic systems and the development of both capitalism and socialism from earlier economic systems. The conflicting ideas of the two systems are compared and evaluated, as well as how each system has actually performed in practice.

According to Barber, his interest in sorting out what type of policies might work to decrease the tremendous divisiveness in America was another reason to write this book.

“Certainly, my own political beliefs affect how I think about these issues and affect the recommendations for change I advocate for in the book,” he said.

Barber has been at HFC since 1981. He was the Associate Dean of Business from 2000-05 and Vice President of Career & Technical Education from 2005-10. He returned to faculty in 2011 after accomplishing his goals as a vice president. He also missed being in the classroom – where he’s been ever since. He’s married to physician Dr. Tricia Barber, his wife of 44 years. Together, they have four children and four grandchildren. Three of his four children took classes at HFC. His daughter Sarah also taught pre-education as an adjunct at HFC.

“Another challenge when writing this book was to make it understandable to a general audience. Teaching has helped me do that. Economics is a complex subject, and people aren’t necessarily enthralled about it or eager to read a book about the subject. As a professor teaching introductory economics to college students, I have had to learn how to make the topic interesting, understandable, and accessible to individuals who aren’t experts in the field. I hope I’ve accomplished that with this book,” explained Barber.

According to Barber, there hasn’t been such a public debate about capitalism and socialism since the Great Depression.

“We’re at a critical juncture in our nation’s history,” he explained. “Wealth and income inequality are important issues, and the impact of such inequality on democracy is a concern to many. This book’s purpose is to contribute to people’s understanding of those issues and what needs to be done to solve them.”

If you are looking for a dry, theoretical analysis, you will be disappointed. Barber's book is interesting and relevant to today's world, from cover to cover.

Capitalism, Socialism, and the Promise of Democracy is currently available for purchase on Amazon. Plans are underway for it to be distributed through local bookstores and various e-book platforms in the weeks ahead.