Notice: This article is more than one year old and is part of the Henry Ford College news archive. Information in the article may be outdated. For the most current news and information about Henry Ford College, please visit hfcc.edu/news, or contact communications@hfcc.edu.
Release Date:
Monday, September 9, 2019 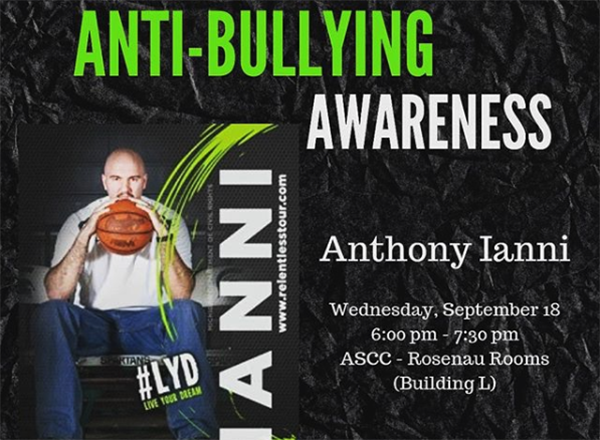 MSU basketball alumnus Anthony Ianni is one of the nation's most sought-after anti-bullying advocates.

Former Michigan State University (MSU) basketball player and motivational speaker Anthony Ianni will give an Anti-Bullying awareness presentation Wednesday, Sept. 18, from 6:00 to 7:30 p.m. at HFC in the ASCC (Bldg. L).

HFC is Ianni’s latest stop on his Relentless Tour. Sponsored by the Michigan Department of Civil Rights (MDCR), the Relentless Tour is a grassroots initiative designed to eradicate bullying across Michigan and beyond. Ianni has pledged his career to helping those who are bullied and facing similar challenges he faced when growing up. He has inspired countless individuals to LYD – live your dreams.

At age 4, Ianni was diagnosed with Pervasive Developmental Disorder (PDD), which is on the autism spectrum. Ianni was relentlessly bullied by his peers. Numerous doctors and specialists told his parents that he would barely graduate from high school, would never graduate from college, would never have a shot at being an athlete, and would most likely live in a group home for his entire adult life.

Ianni was determined to prove everyone wrong – and he did. Despite the adversity, Ianni kept fighting and never gave up. He graduated from Okemos High School, where he played basketball. He earned his bachelor’s degree in sociology from MSU.

“I proved every doctor and professional in my life wrong,” said Ianni.

At MSU, Ianni played basketball under legendary coach Tom Izzo and is the first athlete with autism to play Big Ten Basketball. At MSU, he won two Big Ten championships and a Big Ten Tournament title. He received the 2011 Tim Bograkos Walk-On Award, the 2012 Unsung Player Award, and was a member of the 2010 Final Four team.

Since he graduated from MSU, Ianni has become one of the most sought-after anti-bullying advocates in the nation.

On his website, Ianni listed the following stats about bullying:

• Every 7 minutes, a child is bullied, and 85% of the time, there is no intervention of any kind
• Individuals with autism are one of the highest targeted groups of bullying with numbers ranging from 65 to 90%
• Each day, 160,000 students miss school due to bullying
• Bullying is a leading factor in suicide among kids ages 11-16
• By age 24, 60% of bullies have been charged with a crime
• 34% of all children report being bullied regularly at least several times a year
• 86% of children ages 12-15 report at least some form of bullying has interfered with their studies moderately or severely
• 43% of middle school children avoid the bathroom and locker rooms at all costs due to bullying
• 1 of every 4 children is cyber-bullied
• More 25 million families are currently traumatized by bullying in the nation today
• When polled, 98% of students indicated that they want teachers to intervene
• According to a 2011 Harvard School of Public Health study, male bullies are nearly four times as likely as non-bullies to grow up and physically or sexually abuse their partners
• In schools where there are anti-bullying programs, bullying is reduced by 50%
• Bullying was a factor in 66% of the school shootings reviewed by the Secret Service
• Recent bullying studies have found that schools with a more intense bullying atmosphere had passing rates on standardized tests in such subjects as algebra, earth science, and world history were 3-6% below the average.

“Bullying can affect everybody today, including people with autism. A stat most people don’t know is that 65-90 percent of kids with autism are the prime target for bullies,” said Ianni. “I was one of those victims when I was younger, and it continued until I was a freshman in high school. After I heard this stat, I knew I had to take action!”