Notice: This article is more than one year old and is part of the Henry Ford College news archive. Information in the article may be outdated. For the most current news and information about Henry Ford College, please visit hfcc.edu/news, or contact communications@hfcc.edu.
Release Date:
Tuesday, June 4, 2019 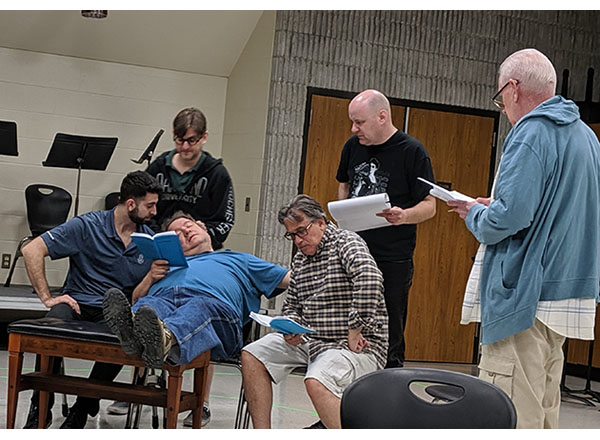 Members of the Jewish Ensemble Theatre (JET) have been rehearsing for their upcoming 30th season for several weeks in the theater department at HFC.

JET executive director Christopher Bremer, an HFC adjunct theater instructor, provided a place for actors to rehearse since JET’s new home in Walled Lake is under construction and won’t be ready until after Monday, June 10, when its 30th season opens with a production of Neil Simon’s The Odd Couple.

Directed by Mary Bremer-Beer, who is the mother of Bremer and also an adjunct theater instructor at HFC, The Odd Couple will premiere June 10. Its regular schedule runs from June 14-July 14.

“JET and HFC’s theater department have had a long relationship,” said Bremer. “We’ve loaned each other props, set pieces, costumes, etc. for years.”

Both divorced men, they’re polar opposites. Felix is fastidiously neat, while Oscar is a slob. The Odd Couple has been adapted into a 1968 hit movie starring Oscar winners Jack Lemmon (Save the Tiger) and Walter Matthau (The Fortune Cookie). The film’s success inspired the 1970-75 sitcom of the same name and a more contemporary sitcom that ran from 2015-17 with Matthew Perry (Friends).

Many variations followed. A 1975 cartoon version featured a neatnik cat and a slovenly dog. A short-lived 1982 sitcom featured an African-American cast, including Ron Glass (Firefly). In 1985, Simon rewrote the play with the two lead characters as women called The Female Odd Couple. An updated version of the original 1965 play debuted in 2002 called Oscar and Felix: A New Look at the Odd Couple. Simon reunited with Lemmon and Matthau, writing and producing 1998’s The Odd Couple II, where Oscar and Felix reunite after 17 years.

“The Odd Couple is my favorite Neil Simon comedy. Simon will go down in history as one of the greatest playwrights of the 20th century, if not the greatest. At one time or another in our lives, we’ve all had a roommate that was hard to handle. JET has never done The Odd Couple before, so there’s no time like the present, especially as this play ushers in our new theater in our 30th season,” said Bremer.

“I want to thank the administration at HFC for allowing JET actors to rehearse on campus for The Odd Couple,” said Bremer. “They have been very kind and gracious in opening the College’s facilities to outside groups. We couldn’t have done this play if the College didn’t open its doors to us.”