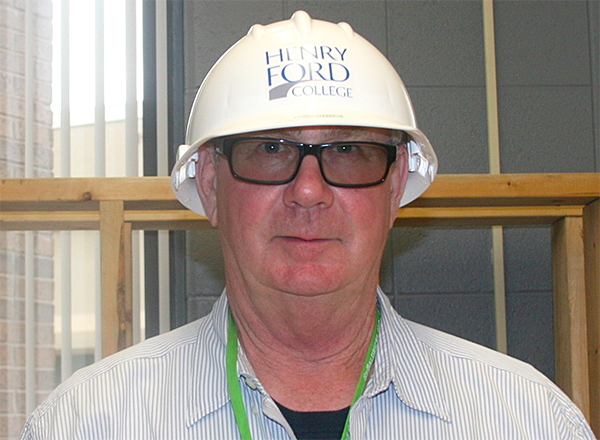 Dan Boylan was happily retired from DTE Energy for two years when he got a call from HFC to teach in the Power and Trades Pathways Program, which started with a partnership between the College and DTE. It isn't just for DTE, though. It is designed to serve the entire energy industry, to provide a workforce pipeline.

“I was recommended for this post,"said Boylan. "I was given the task to oversee the construction of the training yard for the apprentice lineman training classes. My main focus is to get it ready for the September opening."

"Coming to HFC is a chance to get back to into the field and to give back. My job is make things better for the next crop of apprentices,” he added.

Boylan – whose father worked for DTE back when it was Detroit Edison – spent 40 years at DTE, nearly 38 as a lineman. He was also a construction supervisor for Detroit’s streetlight project for three years.

“Most of those streetlights have my initials on them,” he said, laughing. “This was the rebuilding of Detroit’s streetlight system. We were the first city in the United States to use LED lights. In my time at DTE, I’ve seen Detroit clean and pristine. I’ve also seen it not at its best. It's been a pleasure to see it return to its former greatness.”

At HFC, Boylan’s main task is overseeing the construction of three-yards-in-one on HFC's main campus behind the Technology Building (Bldg. E): the transformer yard, the short pole yard, and the tall pole yard.

“We’re constructing a transformer yard, which will have different configurations of voltage. We’re using oil-free transformers, because we’re in close proximity close to the Rouge River. It’s one of our ways we’re being proactive in making this an environmentally clean project,” he explained.

According to Boylan, the transformers are oil-free due to Environmental Protection Agency (EPA) regulations for oil-filled equipment, not to mention the Rouge River drainage in the vicinity.

“The apprentice linemen are building the short pole yard themselves,” said Boylan. “It’s very hands-on. It’s working right along while you’re learning. This way, when they get a job, they’ll have knowledge and experience, and they'll be ready to go.”

“I grew up across the street from HFC at Ford and Evergreen in the 1960s,” he said. “I watched them build the campus, back when it was called Henry Ford Community College. That’s why it’s so great to see things come full circle for me.”

According to Boylan, there will always be a need for linemen, regardless of the state of the economy. The pay is excellent, as are the benefits.

“It’s a lifetime brotherhood,” he said. “I’ve made many friendships, and I’ve become part of a family. That’s what being a lineman is. The camaraderie, the everyday ins and outs. I also liked not being stuck inside all day. I worked in everything from weather that was 50 degrees below zero to heatwaves that were 100 degrees, along with hurricanes and cyclones – I’ve seen it all.”