Notice: This article is more than one year old and is part of the Henry Ford College news archive. Information in the article may be outdated. For the most current news and information about Henry Ford College, please visit hfcc.edu/news, or contact communications@hfcc.edu.
Release Date:
Thursday, May 5, 2016 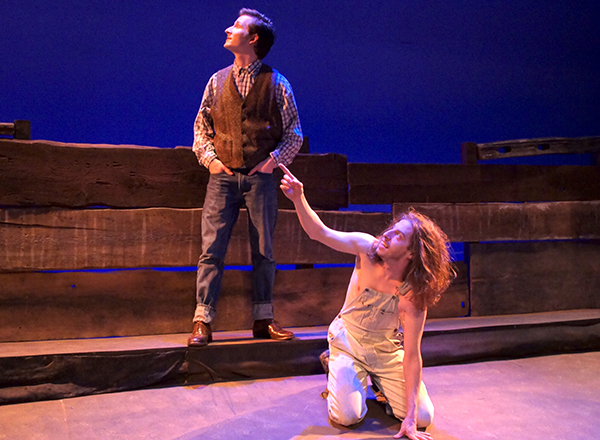 Based on their performances in “The Diviners,” which finished its run at HFC in late April, Neilson and Ross met with the KCACTF official after the April 15 show. They will compete at the regional level in January 2017. If successful, they will showcase their talents at the national festival in Washington, D.C.

Neilson, of Inkster, received the nomination for his portrayal of Buddy Layman. He is slated to graduate with his associate degree in theater by the end of 2016. Afterwards, he is considering attending either Michigan State University (MSU), the California Institute of the Arts (CalArts), or the University of California Los Angeles (UCLA).

“If I affected the audience in some way, if I made them laugh or made them think, then I have done my job. At the end of the production, I realized I had grown with my character. I realized that Buddy and I have more in common than I thought,” said Neilson.

Ross, of Dearborn, received the nomination for his portrayal of C.C. Showers. He is slated to graduate from HFC in 2016 and will transfer to the highly competitive acting program at Oakland University this fall. This summer, he will portray the lead character Peter Evans in HFC’s upcoming production of Pulitzer-Prize winner Tracy Letts play “Bug,” directed by Dr. George Popovich, HFC director of Theatre.

“When I first learned this, it felt like I got hit with a wave of emotions. It’s surreal. It speaks volumes about the training HFC gives its acting students. This proves that HFC can do great things with its students and its acting program,” said Ross.

When she died in 1973, Ryan had no surviving relatives and willed her estate of more than $1 million to start the Irene Ryan Foundation, which awards scholarships to aspiring actors who participate in the KCACTF, providing “recognition, honor, and financial assistance to outstanding student performers wishing to pursue further education.”

According to Popovich, in addition to the Irene Ryan nominees, the entire HFC production of “The Diviners” – directed by Mary Bremer-Beer – has been entered in the KCACTF. HFC will receive notification in December if “The Diviners” is a regional winner.

“We have an extremely high talent level presently at HFC. The KCACTF is the Academy Awards of college theater. It has all levels of colleges competing against each other. We are in Region III of the Festival which includes all colleges and universities in Illinois, Indiana, Michigan and Wisconsin. So we are competing against Northwestern University, the University of Michigan (U-M) and many more famous and prestigious schools. These schools take the Festival seriously and devote thousands of dollars to winning,” said Popovich.

According to Popovich, “The Diviners” is one of two productions that HFC will enter in the KCACTF this year. The other is “Bug,” which debuts this June. This is not the first time HFC has entered its productions in the KCACTF.

“HFC has earned honors from the Festival before. Our 2004 production of ‘The Tempest’ was a regional winner and travelled to the University of Illinois. Our productions of ‘One Flew Over the Cuckoo’s Nest,’ ‘Ruined,’ ‘Macbeth,’ and ‘The Skriker’ have also been honored by the Festival. We do not enter shows very often because of the tremendous expense involved if we do win. The entire set has to be transported, as well as the entire cast and crew,” said Popovich.