Notice: This article is more than one year old and is part of the Henry Ford College news archive. Information in the article may be outdated. For the most current news and information about Henry Ford College, please visit hfcc.edu/news, or contact communications@hfcc.edu.
Release Date:
Monday, March 21, 2005 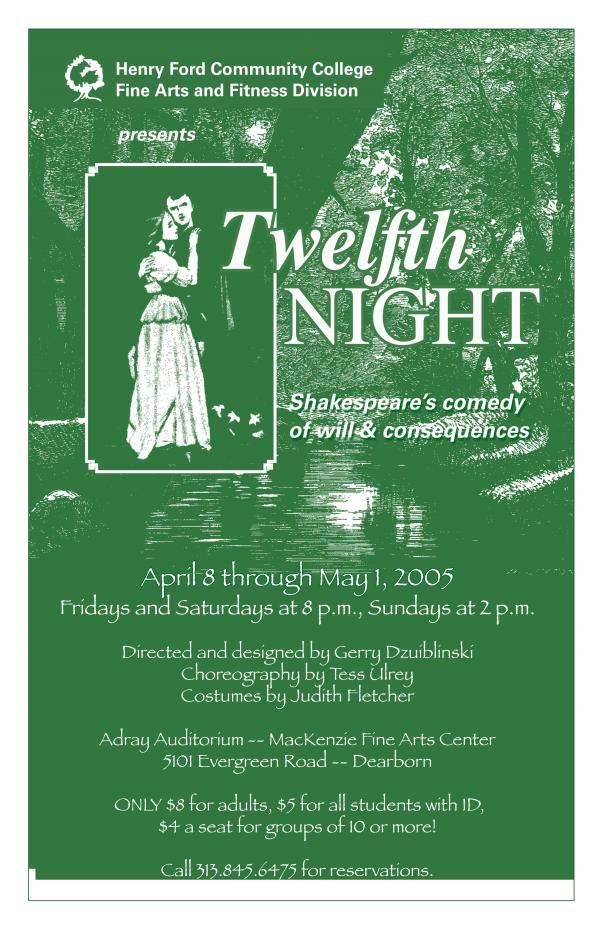 Henry Ford Community College will present Shakespeare’s 'Twelfth Night' April 8 through May 1 in the Adray Auditorium of the MacKenzie Fine Arts Center on HFCC’s main campus, located at 5101 Evergreen Road in Dearborn. Showtimes are 8 p.m. on Fridays and Saturdays and 2 p.m. only on Sundays. Tickets are $8 for adults and $5 for high school students.

Seating is limited, and tickets are on sale now. For ticket reservations, please call HFCC’s Fine Arts and Fitness Division at 313-845-6475. The show is recommended for ages 13 and up.

According to HFCC theater instructor Gerry Dzuiblinski, who will direct the production, the play deals with virtue, 'which is very relevant in contemporary society.'

Rounding out the cast are Steffen Dziczek of Dearborn Heights, who plays Sir Andrew, and Julie Brock of Dearborn, who is Feste, Olivia’s jester.

Set in the fictional country of Illyria, the show looks at complicated interrelationships of the characters involving romantic love, family love, pledges of loyalty, deception, marriage and confusion – with comic relief.

'Like with most of Shakespeare’s work, he gives a wonderful view of characters that you can identify with and say ‘I know someone like that!’' Dzuiblinski added.