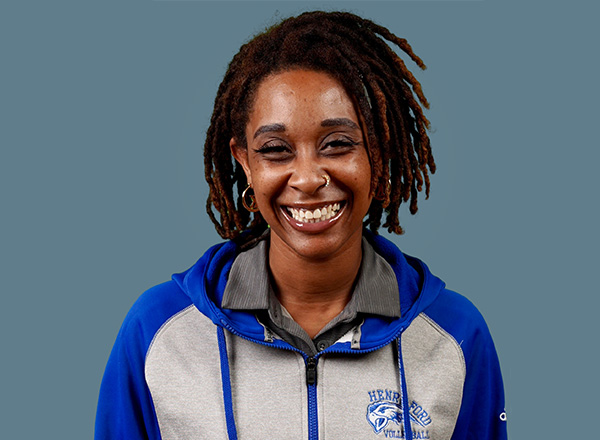 Being the new volleyball coach at HFC not only marks Kija (pronounced “Kia”) Chambers’ first time coaching at the college level, it also marks her return to her alma mater.

Chambers played both basketball and volleyball at HFC (then called Henry Ford Community College) in 2009. Scott Gray and his father Gary Gray were the volleyball coaches during her playing days.

Chambers never intended to become a volleyball player. She began playing the sport during her middle school days to get in shape for basketball.

“As the years went by, I made the varsity team my sophomore year at John Glenn High School and started playing for the Amateur Athletic Union (AAU) after. Once I got a taste of the AAU, I was hooked. I played with a Miss Volleyball winner, and we won a state championship,” explained Chambers.

Grief leads to renewed passion for the sport

Chambers grew up in Farmington Hills. She graduated from John Glenn and continued her education at HFC, where she earned her associate degree in fitness leadership. She transferred to Siena Heights University through its partnership with HFC. There, she completed her bachelor’s degree, majoring in applied science and minoring in information technology. A single mom, Chambers resides in the East English Village neighborhood of Detroit with her two children, ages 10 and 6.

The 2022-23 season marks Chambers’ 11th year as a volleyball coach. She began her coaching career at Skyline High School in Ann Arbor, heading up the freshman volleyball team for two years. For four years, she coached at what is now Southfield High School for Arts & Technology. She also coached AAU volleyball for three years.

“I didn't play sports my second year at HFC because I lost my best friend, Erinn Phillips. She had introduced me to volleyball in middle school. She encouraged me to try out in high school because I wasn’t going to play. She also introduced me to AAU and gave me rides to practices and games. When she passed away in 2009, I stepped away from sports for a few years. Something was missing, so I started going to my old AAU coaches’ practices and I fell in love with coaching,” explained Chambers.

In December 2021, Chambers earned a diversity award from the American Volleyball Association.

“I’m a minority coach,” said Chambers. “It’s their way of highlighting the minority coaches who are making a difference in the game and trying to promote their volleyball programs.”

Prior to coming to HFC, Chambers coached volleyball for four years at the Detroit Edison Public School Academy (DEPSA) in Detroit. Last season, DEPSA’s varsity volleyball team was undefeated in the league and won the district championships.

Chambers spoke about returning to HFC.

“I played here, it's close to home, and I've been coaching youth volleyball for a while. I was looking for a new challenge and new things to learn,” she said. “I wanted to take the next step and become a college coach. I love being here. Walking in the gym brought back so many great memories. I’m really impressed with the improvements Athletic Director Rochelle Taylor has made across the board.”

Added Taylor: “We’re excited to bring Coach Chambers home! I believe she has the dedication and skills needed to elevate our volleyball program, and I’m impressed that she is committed to her own growth and development at this level as well. We’ll looking for great things ahead!”

Leaders in sports and in life

One of Chambers’ immediate goals is to build relationships with 4-year universities to enable her players to transfer and continue their athletic careers.

“I want these young women to become leaders, not just in sports but in life,” she said. “I want to bring that back to HFC and improve upon it.”

“Many students who graduate from Dearborn’s three high schools attend HFC. This is just a way of letting them know we’re part of the community, even if they don’t play volleyball for us. Hosting volleyball camps wouldn’t be limited to just Dearborn, but I want to start out in our own community first before branching out into neighboring communities,” she said.

Chambers spoke about her overall vision for the volleyball program.

“My vision is to make HFC a place where young women can be successful, both on and off the court,” she explained. “They will build the skills here to make them successful when they transfer, having them graduate from HFC with their associate degrees or getting them the classes they need and have them be able to play volleyball. Eventually, I want to make HFC become one of the leading schools in the National Junior College Athletic Association.”