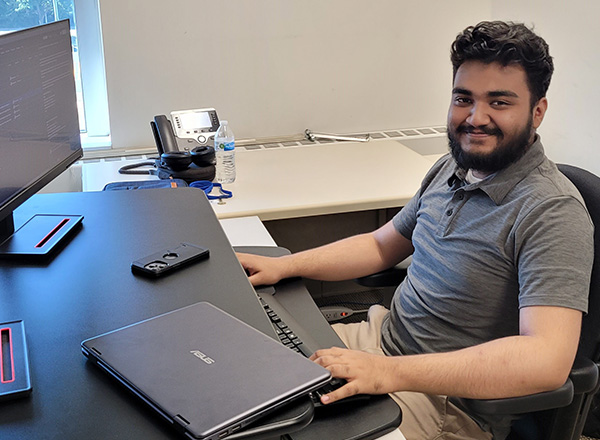 Based on the recommendation of his friend, fellow alumnus, and fellow HFC employee Emad Hani Abdulaziz, Hishaam Ahmad applied for an opening on HFC’s Institutional Research and Business Intelligence team.

“I’ve heard a lot of good things about working at HFC from Emad, who referred me. We went through Henry Ford Early College together,” said Ahmad, of Hamtramck.

"I’m thrilled to have another Early College graduate on the team," said Krogol. "Hishaam impressed us immediately with his professionalism, communication, technical skills, and ability to learn new technologies and ideas. The Early College program already gave us one stellar teammate in Emad Abdulaziz, and I can’t wait to see what our team can accomplish with Hishaam’s help."

Born in Detroit, Ahmad is the second of four children. He learned about HFEC while attending middle school at Bridge Academy West in Detroit.

“The principal’s eldest daughter went to HFEC,” recalled Ahmad. “I was curious, so I found out more about it and put it on my radar. When I learned more about it, it sounded like a good program, so I applied and got accepted.”

The award-winning HFEC is a partnership between HFC, Henry Ford Health System, and Dearborn Public Schools in coordination with Wayne County Regional Educational Service Agency and the Michigan Board of Education. HFEC is a 5-year program on HFC’s main campus in which students can simultaneously complete high school, earn college credits leading to an associate degree, and receive certification in an allied health profession.

Originally, Ahmad majored in biology, planning to enter the healthcare industry, but he realized it wasn’t the right fit for him and decided to change majors. He graduated from HFEC in 2020, earning his associate degree in computer information systems. Transferring to Wayne State University in Detroit, he is working toward his bachelor's degree in computer science with a projected graduation date of 2023.

Ahmad recommended HFEC to his younger siblings. His brother graduated from HFEC last spring, and his sister will attend HFEC as a freshman starting this fall.

“I got a great education at HFEC,” he said. “It really prepared me for Wayne State. I can’t recommend it highly enough.”

Previously, Ahmad worked for Shapla, Inc., a retail store owned by his parents in Hamtramck. There, he got experience analyzing data and writing financial reports.

In his new position at HFC, Ahmad’s duties include manipulating data and getting the appropriate people across the College the information they need.

“I’m in a stage where I’m absorbing all the information I can,” said Ahmad. “Once I do, I plan on picking up the pace.”

“Typically, when you start a new job at a new place, it’s nerve-wracking. That’s not the case with me. I was here for five years when I was a student. It’s familiar. It’s nice that I graduated from here, only to work for the College that awarded me my degree,” he said.

“Everybody has been really helpful and really nice. It’s a very supportive environment here, that’s for sure. That was common when I was a student, and it’s common now that I’m an employee.”

Abdulaziz is glad to be working with Ahmad -- and proud that he had some influence on that decision.

“I’ve known Hishaam as a classmate, friend, and now colleague for almost seven years now,” he said. “In that time, I’ve never seen him settle for anything – he consistently always tries to grow and better himself in every aspect. I’m excited to see where he’ll reach within the coming years.”