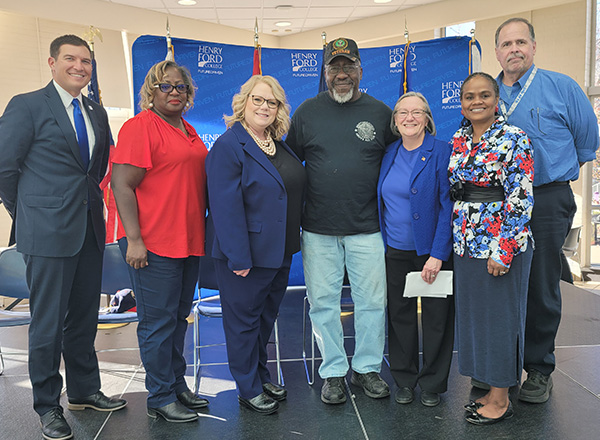 There were several instances during his education at HFC when student veteran Ed Stokes wanted to quit.

But Gail Bock wouldn’t let him.

“Gail has been very helpful. She would say to me, ‘You’ve got to finish this. You’ve started this, you can’t stop.’ And I was like, ‘Yes, ma’am.’ She’s very influential,” said Stokes, laughing. “She’s been a big help. When I’d get down, she’d always be there for me. She’s a good listener. Very encouraging.”

Stokes, who lives in Redford with Joanne Peery-Stokes, his wife of 36 years, will graduate from HFC at the end of the Fall 2022 semester, earning his associate degree in supply chain management. He is attending HFC through the Department of Veterans Affairs Veterans Readiness and Employment program.

“I’m glad I made it through,” he said. “I’ve really enjoyed my time at the College.”

32 years in the Army

A native of Clarksdale, MS, Stokes is the second of seven children. He is also a twin. A graduate of Coahoma Agricultural High School, Stokes earned his machinist certification from Coahoma Community College in Clarksdale.

“When I finished college, I was certified as a machinist and needed experience to get a job, so that’s why I decided to join the Army,” he said.

Stokes joined the Army on Sept. 28, 1981. He began basic training at Fort Dix in Trenton, NJ on May 27, 1982. He served in the Army in both active duty and the Reserves for 32 years. On June 16, 2014, he medically retired from the military and earned an honorable discharge. His final rank was Sergeant First Class.

“I joined the Reserves because I missed the camaraderie,” he said. “That’s what it boiled down to.”

Stokes, whose primary military specialty while on active duty was Aviation Machinist, served in Operation: Desert Storm, where he was stationed in Turkey. His job was aircraft recovery, where he would transport downed helicopters back to base and make them flightworthy again.

“If they weren’t recoverable, we had orders to destroy them to keep the enemy from using any part of them against us,” explained Stokes. “After returning from one of our recovery missions, the crew chief noticed that there were four bullet holes in the tail boom of our chopper. We didn’t know that we’d been hit until we landed. We got lucky.”

During his 10 years on active duty, Stokes was stationed in:

“The Army gave me the chance to travel all over the world,” said Stokes. “I have traveled to more than 42 countries, walked on the Great Wall of China; visited the Red Square in Russia; visited the slave castles in Ghana, West Africa; and watched bull fights in Spain. These are some of the interesting places that I was able visit because of the U.S. Army and meet some interesting people along the way.”

“HFC is a wonderful school”

Upon retiring from the military, Stokes worked with VA counselor Merri Brush, who’s now retired, about career options. One was supply chain management. Stokes’ final job in the Army was supply sergeant.

“She saw that HFC had a supply chain management program, and told me that’s where I’m going!” he recalled.

So Stokes enrolled at the College and met Bock.

“Since I met Mr. Stokes in the fall of 2018, he has shown perseverance and the best attitude,” said Bock. “While attending HFC, Ed has not only succeeded in pursuing his education, he has taken the time to connect with other military-connected students at HFC to support them in their educational journey. As Ed completes his program and graduates from HFC, I wish him all the best.”

While at HFC, Stokes has taken advantage of the HFC Veterans Services, which helped him tremendously. He was also active in the HFC Student Veterans Association.

“I loved it. I’m usually one of those old soldiers counseling the younger ones,” said Stokes. “I’ve really enjoyed my time at HFC. HFC is a wonderful school. I was getting ready to quit, but because the instructors were so supportive, they were the reason I stayed. If you have a problem, they are willing to work with you.”