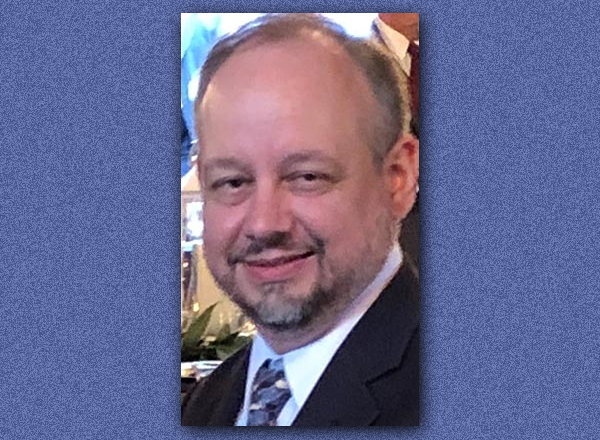 Larry Smyrski has worked at HFC since 1993. He was recently appointed as the interim dean of the School of Liberal Arts (SoLA).

As a student, mathematics was always HFC math professor Larry Smyrski’s most challenging subject. The challenges it presented led him to study it in college.

“I was planning on earning a PhD in mathematics, enrolling directly in the doctoral program out of college. Then I started teaching and was assigned my own classes – not as a teaching assistant for another professor – and decided that teaching at the college level, rather than doing research in mathematics, was what I wanted to do. I just fell in love with working with students and helping them,” said Smyrski, a lifelong Downriver resident.

Since 1993, Smyrski has worked at HFC in either a teaching or administration. He was recently appointed the interim dean of the School of Liberal Arts (SoLA) upon the departure of SoLA dean Dr. Jennifer Ernst from the College last fall. (Acting Dean Janice Gilliland stepped in for the final two months of the Fall semester.)

"We are so excited to have Larry Smyrski rejoin the Academic Affairs Leadership Team and are very grateful for the experience, expertise, and vision that Larry will undoubtedly bring to the School of Liberal Arts. In addition to strong administrative skills, Larry has always been a staunch advocate for academic excellence and faculty leadership,” said Dr. Michael Nealon, HFC Vice President of Academic Affairs.

“I was a member of the College Senate when I was invited by then-HFC President Dr. Andrew Mazzara, along with several faculty and administrative colleagues, to participate in a leadership training through the University of Michigan with people from community colleges from around the country. Taking on the AD role seemed appropriate at the time as a way to serve my math colleagues and the College,” he recalled.

Smyrski's return to the classroom was hastened by the College's financial crisis in 2013 and the subsequent reorganization.

“With the Math and Science Divisions merged into one, either (HFC geology professor) Dr. Brian Kirchner or I would take over the new combined division. I'd like to say that we did ‘rock-paper-scissors’ and Brian had the advantage as a geologist, but then I'd have to decide whether it was the winner or the loser who stayed as the administrator,” he said, laughing. “In any event, I returned to faculty but spent time as the math department chair and doing a few other quasi-administrative tasks with some redirected time for several years before fully transitioning back to just teaching. Teaching is where I am most at home.”

Last fall, Nealon called Smyrski about the interim deanship of SoLA. After careful consideration, he accepted the position, stepping back into a temporary administrative role for the College until a permanent dean is hired. (Currently, Robert Yahrmatter serves as the Associate Dean of SoLA).

“As the interim dean, my role is, first and foremost, to help and support the people who have been providing leadership in SoLA without getting in their way,” said Smyrski. “Coming from outside SoLA, I will bring a different perspective to the discussions and decision-making within SoLA. While I know many of the people in the School, I have just started learning about it from the ‘inside’ perspective (how do things work, who does what, etc.).”

Smyrski doesn’t believe in change for the sake of change.

“I also don't think that just because I used to do something in math back in the day it will work in this time in SoLA,” he said. “As the first dean, Jennifer had the challenge of pulling the School together and making things work. SoLA has such a diversity of disciplines and the processes that came from the previous divisions that were incorporated into the School. There are many good things happening in SoLA, and I intend to help nurture them and perhaps incubate others.”

There is great goodness at HFC, which shines during a pandemic

The coronavirus pandemic has altered the way HFC (and nearly every other educational institution) is teaching students. Smyrski spoke about teaching remotely, from both a faculty and an administrative perspective.

“I'm not sure there is a specific challenge in dealing with online teaching from the administrative perspective,” said Smyrski. “Whether classes are on campus or remote, I have to do what I can to support faculty in their delivery of the course content and learning objectives and ensure as best I can that students are receiving the education they seek and deserve from our College. How that occurs is different, but it is the same goal. We are going to have to give thought to how to best transition from a nearly 100 percent remote learning environment when going back to campus.”

He continued: “What learning opportunities do we offer students who are challenged to get to campus because of family, work, or transportation situations? And balance that with the desire of many students and faculty to return to the familiar confines of the classroom. Remote learning has been a challenge for many, even as it has made taking classes possible for others. How do we balance offerings to support students as they pursue an education in ways that work for them in an environment that will never be the same as we thought it was a year ago?”

For Smyrski, the best part of working at HFC is the people – both students and colleagues alike.

“It's as simple as that. The community of HFC is full of good people,” he said. “By and large, there is great goodness at HFC.”