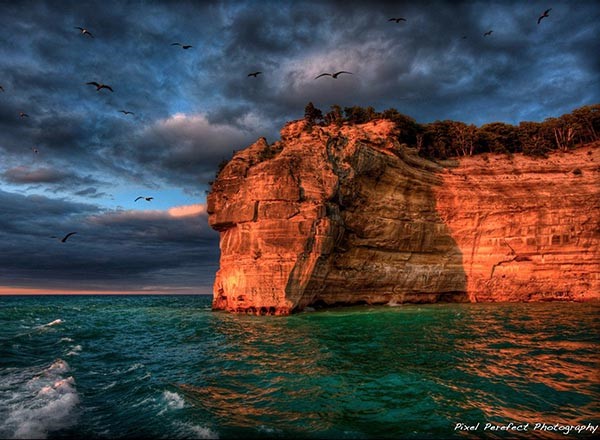 For HFC alumnus Lance Rosol, photography runs in the family. His late uncle, Stan Rosol, was a photographer in Hollywood after World War II.

“My uncle took the best photos,” said Rosol, who lives with Kayelea, his wife of 30 years, in Dearborn. They live in Rosol’s childhood home in West Dearborn, which he purchased after his mother’s death in 2013.

His uncle inspired Rosol to become a photographer, which he has been doing for more than 30 years. In fact, Rosol owns his own photography business in Dearborn called Pixel Perfect Photography, which he opened in 2007, as well as the website selling his artistic photography.

He also works as a broadcast manager in the Service Engineering Operations at Ford Motor Co. in Allen Park, shooting videos for automotive service technicians and videos aimed at recruiting technicians, a position he has held since 2018. Throughout his 30-some years in photography, Rosol has done all types of photography:

Rosol has photographed many events at the College. His photography has won awards. Most notably, his photos were named “Best in Show” winner at the 14th, 15th, and 22nd annual Juried Photography Exhibitions at the Padzieski Art Gallery in Dearborn in 2009, 2010, and 2017. He was the recipient of the Mayor’s Art Award for Artist/Performer of the Year in 2013.

One of Russ Gibb’s many media students

A 1984 graduate of Dearborn High School, Rosol was heavily involved in the late Russ Gibb’s media/video production classes (Gibb was the owner of the Grande Ballroom in Detroit and a frequent donor to HFC). Rosol co-produced the award-winning Back Porch Video, a show created and hosted primarily by high school students, and directed Russ Gibb at Random, Gibb’s TV talk show.

“I tried to learn everything I could about video: writing, producing, directing,” said Rosol, who bought his first 35mm camera during his DHS days. “I had always seen video and photography as two very distinct disciplines, and I didn’t really think about how they were so closely related until the digital photography revolution. But at that time, I realized I needed a degree to support my desire to go into the video/photography business.”

Rosol started at Wayne State University for the 1984-85 academic year. He took the 1985-86 academic year off to raise money to pay for his tuition, and also did some traveling. For the 1986-87 academic year, he attended HFC (then Henry Ford Community College), where he studied telecommunication. Rosol returned to Wayne State for the 1987-88 academic year, attending classes part time while working, eventually earning his bachelor’s degree in television/communications in 1991.

“Attending HFC the year I did was the best decision, because it allowed me so many opportunities. I loved being at the College. I became editor of the school newspaper, The Mirror News,” he recalled. “I was still working in video at the time and was learning on the job. It was a cool school. I’ve been in touch with people who went to the College throughout the years.”

Rosol has made his reputation in the Dearborn and Detroit communities, taking photos of Ford World Headquarters, Tiger Stadium, and Michigan Central Station, among many other area landmarks. He gets his printing done at Image Works and his framing done at Village Picture Framing & Art Gallery in Dearborn.

Recently, Rosol recruited both of those business partners when he participated in remodeling Cherry Hill Barbers, at Cherry Hill and Telegraph in Dearborn, which has been a staple in the city for 65 years. Rosol’s black and white photos of area landmarks have replaced the sports memorabilia as seen in a recent edition of the Dearborn Press & Guide. Among the landmark photos is a black and white photo of the Ford Rotunda taken by his uncle more than 65 years ago.

“(Owner Lisa Sourbeck) wanted a photo of the Rotunda when we first started discussing this project in 2020, but I didn’t have one at that time. Then I got this totally unexpected, huge trove of my uncle’s negatives, and among them was this unbelievable image of the Ford Rotunda. I just think it’s so cool to now have my Uncle Stan’s image on the walls along with mine,” said Rosol. “It was a nice project. I really enjoyed it.”

Sourbeck, who has been cutting Rosol’s hair for more than 15 years, knew of his work and hired Rosol to help with her remodeling project.

“Being a past board member of the Dearborn Community Arts Council, I have long been a proponent of having local artwork in establishments and around the city,” said Rosol. “Keeping it local as much as possible is how a community thrives.”