Notice: This article is more than one year old and is part of the Henry Ford College news archive. Information in the article may be outdated. For the most current news and information about Henry Ford College, please visit hfcc.edu/news, or contact communications@hfcc.edu.
Release Date:
Sunday, June 27, 2021

Mental discipline, work ethic, and tennis: a great foundation for an engineering career 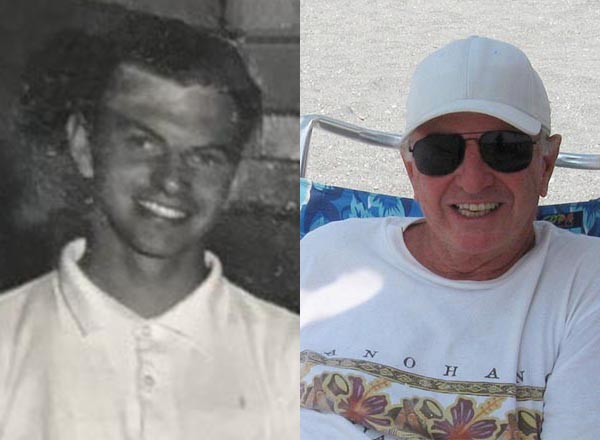 These two photos of HFC alumnus William Bronner are from his college days circa 1961 (left) and today (right).

When Bronner was a student at HFC (then Henry Ford Community College) from 1959-61, Campbell was the Dean of Instruction (a position he held from 1960-65 during his 10 years at the College).

“I did communicate recently with Ron Campbell. First, it was with an email and then a phone call last Friday. I called him after discovering he had tried to FaceTime me, which I don’t use too often. He’s amazing. He was clear, friendly, has a good memory, and still mobile as I caught him driving in Monroe and stuck in a traffic jam!” said Bronner, 80, who splits his time between upstate New York and Florida. He has three daughters and seven grandchildren, including a set of triplets.

Toughest college class was at HFC

A native of Detroit, Bronner grew up in the city’s Grandale neighborhood. He graduated from Mackenzie High School in Detroit in 1959. That fall, he attended HFC, where he played on the tennis team for Coach Sherm Collins.

“A strong memory I have of the College was the summer class I took – public speaking, which was taught by Rhonda Kittering. Going home after the lecture, I had to think of a topic, outline the speech, practice the speech, and present it the next day or maybe a day later. I believe it was the hardest class I ever had in college. It was hard for other students too,” recalled Bronner. “I really enjoyed the camaraderie I developed with many classmates and teammates during my time at the College.”

Bronner transferred to Wayne State University in 1961, where he continued his tennis career on the Wayne State tennis team, which won the conference championship both years he attended. He was also a proud member of Tau Beta Pi, the national engineering honors society. He earned his bachelor’s degree in electrical engineering in 1963.

“I had great professors all the way through at Wayne,” he said.

In 1971, Bronner earned his master’s degree in electrical engineering from Syracuse University in New York. At Syracuse he also completed some doctoral coursework. He worked for IBM Endicott in Endicott, NY while he was still in school.

“(Syracuse) professors came down to IBM Endicott 2-3 days/week, so we could take courses locally as we were working 8 hours a day and we were married and raising families,” recalled Bronner. “IBM encouraged follow-up education and paid for everything. Of course, good grades were a requirement. I continued with coursework from 1971 until maybe the mid-1980s, completing a couple of courses a year. I accumulated enough credits for a Ph.D., with serious thoughts about the fields of systems and software engineering.”

Bronner spent 30 years at IBM, working for the IBM Federal Systems division for the majority of those years. IBM Federal Systems was sold to defense contractor Loral Corporation in 1993, then Lockheed Martin in 1995. He remained with Lockheed until his retirement in 2004.

After retiring, Bronner has kept busy. He has remodeled his home in New York, a job that took nearly three years and “came out absolutely beautiful.” He bought his Florida home in 2007, where he spends six months of the year. He is active and keeps in shape by swimming and biking and, of course, playing tennis. He has volunteered to help others. Bronner enjoys spending time with all of his family members, both local and distant.

He has fond memories of his time at HFC. It had set him up for academic success at Wayne State and later Syracuse.

“HFC prepared me with the mental discipline and work ethic required for university-level courses and the need to be successful,” he said.